I’d like paint a nice little scenario for you. You’re walking down the street, mobile laptop or netbook in hand and you happen across a USB thumb drive that appears to be embedded in a brick wall. Yes – that’s embedded – meaning it’s been covered in mortar and seated in a random brick wall. In similar “Speed” action movie fashion I’m going to demand – “What do you do?” 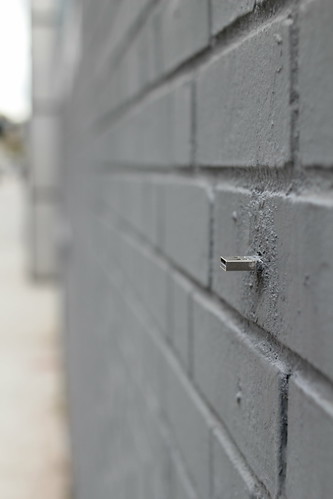 Chances are, if you’re smart – you’ll scream bloody murder and hightail it far from the anonymous drive! But that’s not what New Yorker Aram Bartholl had in mind when he set out to begin his “Dead Drop” campaign. According to the official site, Aram wants people to drop and extract files at will from these locations (now a total of 5) throughout New York city. He also plans to use the idea and pass it through a variety of cities and locations across the country.

Aram also states that each location has a readme.txt which explains what the aim of the project is exactly and what to do once you’ve connected. This would indeed be a great way for small businesses and web design techs to advertise.

The “Dead Drop” is considered by Bartholl to be an “anonymous, offline, peer to peer file-sharing network in public space”.

I do seriously want to ask the guy above why he didn’t think of using a USB extension cable… it would have been so much simpler. 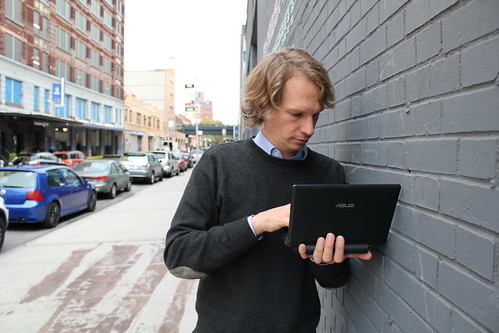 I personally would be afraid to plug in just because of the possibilities but curiosity may outweigh fear in this case, seeing as most people would be interested in what is simply on the little drive. It really is a cool idea- but it certainly won’t take long for someone to upload a virus or a ridiculous amount of porn. The latter would not be a great thing to see popping up on your computer when you “jack” in – especially when you’re exposed in such a public place. Imagine passerby staring at you with that stern gaze of disgust – it makes me shiver just imagining it!

But still the project certainly deserves a worthy mention and it would be great to see it spread to additional cities. There will of course need to be some way to protect users from some of the more unsavory files out there. Perhaps one of you free virus providers could upload a – fully working – virus install on all these babies; *hint hint.

For a list of places where you can jack in to these “Dead Drops” and more detailed project info check out the official link after the break.