Facebook unleashed a new dedicated camera app for iOS that gives the user interface a makeover and adds some notable features for editing photos. One could say the Facebook Camera is now remarkably similar to Instagram, which is not necessarily surprising, but still serves to foreshadow events to come.

Even though, technically Facebook acquired Instagram for $1 billion, the deal will not finalize for another six to twelve months as the FTC reviews the particulars. This means that it will still be quite some time before we start to see features from the Instagram media app bleed over into the Facebook world.

Though time has slowed Facebook’s acquisition of Instagram, it has not stopped them from readying their social airwaves for the joining of the two platforms. The proof that Facebook is readying for the combination of the two platforms lies in this lovely new photo editing and social media app, Facebook Camera for iOS.

What’s The Big Deal About The New Facebook Camera For iOS? 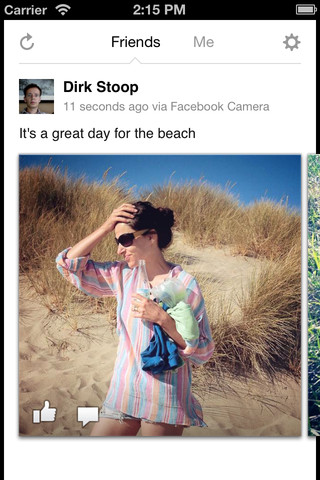 In the past, the Facebook Camera essentially functioned as a standalone camera app with basic features for snapping photos and uploading them to the social media platform we all know and love. Unlike Instagram, the Facebook Camera app included no filters or extra editing features to allow aspiring photographers the option to creatively spice up their photos before throwing them into the waves of social media.

The new Facebook Camera app for iOS takes inspiration directly from Instagram, and throws some artistic filters into the mix as well as a basic set of editing tools to make pictures look more, well… artsy fartsy. Of course, most of the filters and editing options are not nearly as advanced as some that can be found on Instagram, but the point here is that Facebook is taking a giant step in the right direction.

The new Facebook Camera app also allows users to browse the latest photos from their friends’ news feeds, and interact much as they would via Facebook by commenting on them, “liking” them or sharing them with others. These features are not anything new, but the Facebook Camera app does include a slew of unique features that expand its overall usefulness. 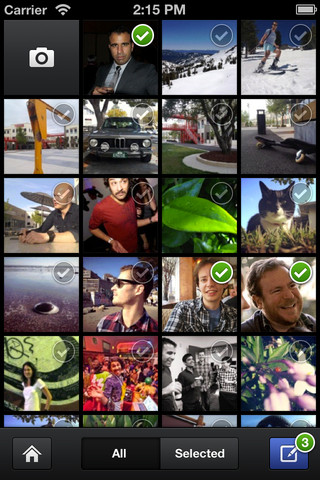 One of the best new features is that users can now upload groups of images to their Facebook feed at once, instead of just a single image at a time. All uploaded images can be altered using the filtering and editing tools, and can also include a custom caption for each image.

The Facebook Camera also allows for direct upload of images already on the mobile device, and allows users to capture images much like the original camera app did.

When Facebook Camera for iOS boots up, users are greeted with a standard news feed type window, with a camera roll that lines the top of the screen and tabbed inserts for additional menus. To browse the news feed and check out recently uploaded photos of friends, one simply must scroll down the window just like in the standard Facebook app. Users that want to quickly upload images from their mobile device, or in this case their iPhone, can simply choose the camera roll across the top of the screen which will expand to reveal all available images on the device. FB Camera users can also select the “me” tab to browse photos and images which they’ve been tagged in. 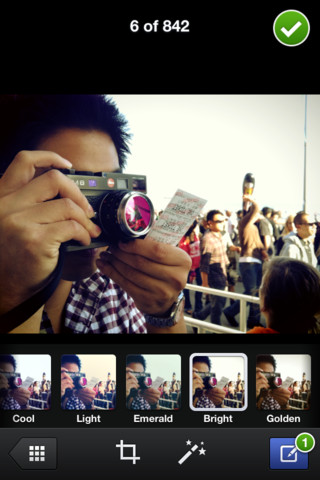 Once a photo is captured or opened via the Facebook Camera app, users are presented with a straightforward menu of options, that includes a visual theme which resembles the old camera app. In order to add an artistic filter to an image a magic wand icon must be selected, which then expands to include the available filters. If the user wants to crop the photo, there is simply a dedicated icon for it. Filters include options to add copper toning (much like sepia), neon lighting, black and white and many more.

There Are Negatives to The New Facebook Camera App

There are issues prevalent in the new Camera app, which will hopefully be taken care of in later updates.

The biggest issue is that because the Facebook Camera app is standalone, it is not cross-compatible with the standard Facebook app. This means that if users have snapped a photo in the regular Facebook app and they want to edit it, they must exit Facebook and open the dedicated camera app. Alternatively, if a user is currently editing an image in the Camera app, they can not transfer their work to the Facebook app before uploading – simply meaning they have to finish editing the photo before uploading through the standard Facebook app. This issue can of course be overlooked by many, and mainly serves as a nuance but having to switch between two separate apps can get tedious. 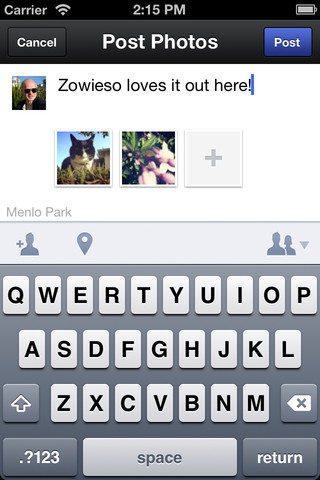 The second issue is that, while the photo filters are interesting and do add a little more creativity into the mix, they don’t do much for the enhanced photos, at least when compared to some of the best images that have been altered through Instagram. Instagram provides a much better resume of photo editing support, and even includes that cool “tilt-shift” feature everyone loves so much. Unfortunately, Facebook Camera is assuredly no different than most of the other photo editing apps out there. The exception here, is that most Facebook users will now quickly be able to upload images to their Facebook account, instead of using various applications to do so.

Despite its unobtrusive shortcomings, the Facebook Camera app for iOS does provide a unique experience that is enough to warrant the use of the app. The Camera app is currently available via the Apple App store for free. 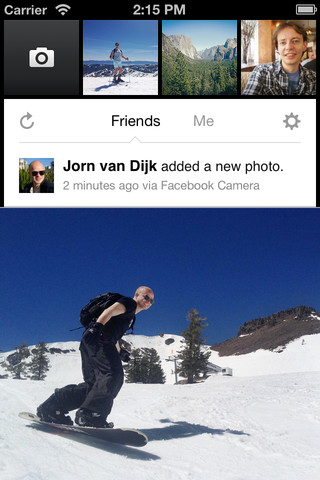 The Facebook Camera app is currently unavailable for Android devices, and there is no word whether the app will be making its way to the platform or not, but its likely that Facebook will eventually show some love for their Droid crowd.

This new dedicated Camera app will not serve as an alternative to Instagram, but will instead be a worthy editing platform for some of those less “plugged in” Facebook users- yes, we’re talking about some of the older folks out there. Even those who are late to the photo-filter scene, can still look hip thanks to the new Facebook Camera.

At least Facebook has set the stage for the future with this new app; once the acquisition of Instagram is finalized they can begin integrating some really unique features and support. As Bogart would likely say to Facebook, “Here’s looking at you kid.”