The Google+ app for iPhone got a significant UI makeover at the beginning of May. The upgrade turned the rather bland look and feel of the Google+ mobile app into a beautifully innovative experience.

When the iPhone upgrade hit the market first, it left many wondering when the new features would be coming to Google’s own Android platform. The answer is today.

Google officially rolled out version 2.0 of the Google+ app for Android devices, which now offers Android users the same user interface and innovative features as the iPhone version.

Google+ for Android even gets access to exclusive features that the iPhone does not have which makes the extended wait worth it. 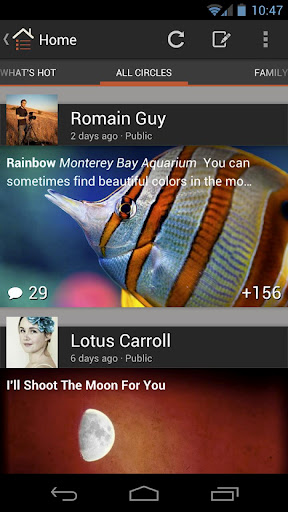 The new Google+ app introduces a gorgeous news stream interface that now includes an image with every post. There are also varying feed categories that can be swiped to (with a swipe gesture) after being customized, to filter out various posts from outside the selected circle.

Several unique features of the Android version of the Google+ app include the option to download photos from a conversation, the option to edit posts after they’ve been created and a nifty Hangout button integrated that has been integrated with the main user menu. Android users can also set the Google+ app to send custom ring notifications when a new Google+ user is calling for a Hangout session.

Anyone who used the previous Google+ app will notice that the side menu is remarkably similar, in that it slides out and includes the same menu options as the older app version. For those that have never used Google+ on a mobile device, the menu includes links to the main news feed, the logged in user’s profile, Google messenger (IM) services, Google Hangout, Google account photos and of course “Circles”. 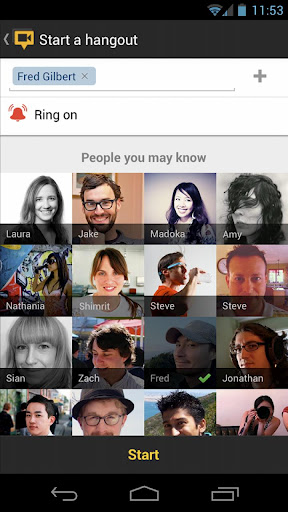 Google+ works just like any other social network in that users can post status updates to their feed, share fascinating links and photos or comment on existing posts and interact socially with others. As is customary with other social media networks, users can also “check-in” to nearby locations using GPS and location services information to alert friends and family on a current location.

In case you don’t already know how the Google+ network operates, whenever you follow someone you have the option to lump them into one of many custom groups called “circles”. The idea is that users can organize their contacts into various circles, and share information with only certain people at a time. For instance, if you had a wild night of partying and wanted to share it with friends but not family and co-workers, you can filter out those circles and keep them from viewing the status update. Alternatively, if you discovered a link you wanted to share with only co-workers, you can filter out friends and family from the related update.

Google+ also integrates video calling support into a unique feature called “Hangouts”. Google+ users can video chat with one another in groups of two or more. During Hangout sessions, users can also play games with one another, or chat with others by inviting them to the session.

Get Connected on Google+ Now

Once the account has been created, Google+ will prompt users to import contacts to connect to. Users can also search for friends and family using a basic search bar, or they can just search for Google+ users through the Google search engine.