Remember that Nokia Lumia 800 entertainment bundle we featured a while back? Yeah well, turns out the Nokia Lumia 900 (the newest model in the Lumia series) is at the top of the Amazon bestsellers list – only a day after it was released.

At the time of this writing, the Nokia Lumia 900 was seventh on Amazon’s top ten bestselling wireless devices list. The Lumia 900 is trailing just behind the Droid Razr Maxx, the Samsung Galaxy SII, Samsung Nexus 4G, and the Motorola Droid Bionic.

The boost in sales could largely be due to the low price that Amazon Wireless is offering ($49.99 with a new two year service contract agreement). The Nokia Lumia 900 is exclusively available from AT&T and can also be purchased directly, but Amazon’s price is $50 less.

Judging by how fast the phone jumped to the top wireless devices list, it’s likely the Nokia Lumia 900 will beat most of the top Android devices in total sales- at least on Amazon. 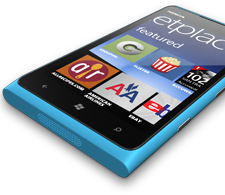 If you didn’t catch all the Lumia 900 tech specs and features the first time around, then you’re in luck.

The Nokia Lumia 900 is a Windows Phone, which if you don’t already know is the latest version of the Windows Mobile OS (Windows Phone 7.5). The Lumia 900 features first and foremost 4G wireless connectivity, which means it offers the fastest available wireless speeds. 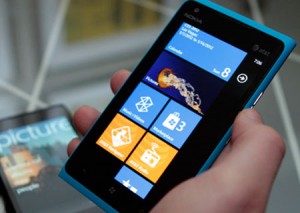 The Lumia 900 is powered by a 1.4GHz single-core Qualcomm processor and 512MB of installed memory (RAM). It features a large 4.3″ AMOLED touchscreen display with a 480×800 maximum supported resolution. Of course the Lumia 900 has all the standard features like integrated Wi-FI, GPS support, Bluetooth functionality and AT&T mobile hotspot support.

The biggest feature of the new Windows Phone OS is the integrated Xbox Live support, which allows users to browse the Xbox Live service and play games (with full achievement support) while on the go.

Unfortunately the Nokia Lumia 900 has no microSD card slot, so there’s no option for users to increase storage capacity, but obviously the lack of such a feature is not a product killer. 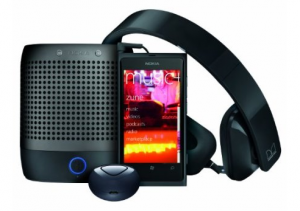 Okay, so maybe the price tag wasn’t really that low, but that doesn’t make the Nokia Lumia 800 entertainment bundle any less attractive. All of the included hardware is well worth the elevated price, and works well as a comprehensive entertainment bundle.

But with the recent success of the latest Lumia device, the Lumia 900, it’s very likely that we’ll see a similar entertainment bundle crop up – albeit, one that is slightly more updated.

At the very core of the Nokia Lumia 900 is the Windows Phone operating system. Microsoft has completely revamped their mobile operating system and added a plethora of new features. Surprisingly enough, the new Windows Phone OS doesn’t get as much credence in the modern mobile market as it should. When compared to the broad Android Market, Windows Phone devices aren’t nearly as fragmented – that is, their hardware specs are relatively similar. When compared to iOS devices like the iPhone, Windows Phone devices are completely integrated with social media – in fact, one could even go so far as to say that Windows Phone OS is more integrated with social media than iOS.

No matter which type of device actually deserves more credence or respect, it would be completely illogical to dismiss the incredible potential of the Windows Phone operating system.

Luckily the Nokia Lumia 900 is currently at a very affordable price, and is riding the waves of success well. Several reviews praise the phone for it’s basic hardware features and it’s great Windows Phone software. We may yet see the Windows Phone OS get the limelight it deserves.

If you’re interested in picking up the Nokia Lumia 900 we recommend purchasing through Amazon Wireless, the extra $50 discount is great on the wallet.