This article was produced on behalf of PrinterInks – distributers of toners and ink cartridges throughout the UK and Europe.

The sources from which we get our news have been slowly changing over the last 100 years, from newspapers to television and at an increasing rate, computers and cell phones. The question often asked is: will this be the death of print? Perhaps it will slow it down, but people still like their newspapers. You don’t need a power cable, or an internet connection and you can read it in the sun. There are certain papers that people trust. Most newspapers are also available online, but not everyone has converted yet. 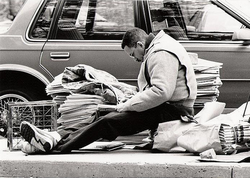 It’s like Rolling Stone Magazine said, “Instant coffee didn’t kill the coffee bean.” It’s hard to deny the tangible difference between a paper newspaper and the same thing onscreen. Perhaps when we are raised paperless, we will adjust completely to reading from a screen, or if a computer screen can become more like a piece of paper.

To find a past example, television news didn’t kill the newspaper. It is appealing with personalities talking to us with video and photos of current events, and live broadcasts from around the world. Perhaps the internet will swallow television news first, and take it’s time with the long-built tradition of print. After all, the internet can provide all the services that television can, except you need a computer and an internet connection as opposed to a television and an antenna, which is free.

Many families around the world still cannot afford computers, and a monthly service fee. Not to mention many areas may not have easy access. With satellite service, and a credit card number you can get online virtually anywhere on the planet. So perhaps when internet is worldwide and free we can start really seeing the changes that are now happening slowly. 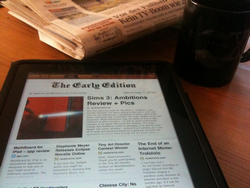 With new and interesting outlets like Twitter, a younger generation has instant access to news all the time. This represents a solid group of people who may not have normally even read a newspaper or cared about the daily news. This same generation is heavily involved in social networking, where it’s almost impossible to not know the latest headlines. There are many upsides to the evolution of information technology. The world can see whats going on, and get a sense of what’s going on everywhere, right and wrong, and say something about it. Instead of being sheltered in one area, the whole world is now open to scrutiny. Visibility like this could prevent large scale evils, like the genocide in Darfur and Rwanda, or the rise of the Nazis, from happening again.

The downside? There is more content to sort through. Plus, much of the information may not be true. So it’s important to find a source that you trust to find your news. A source you enjoy reading. There is no denying that we can get our news faster online, and we can react and discuss what’s going on in the world with the entire population in seconds. That might be what kills print in the end.