Without an Xbox 360 wireless adapter, there’s no way to connect the console to the internet unless you run ethernet wires all throughout your house. No one wants cables strewn about the floor, especially in an age where wireless technology is so prominent.

That’s why one of the best things about the new Xbox 360 Slim consoles is that they include integrated wireless support. Unfortunately older Phat and Elite consoles do not include wireless technology built-in, which means users must either take advantage of an ethernet cord or connect the optional wireless adapter.

Ad-Hoc system link support is also available between Xbox 360 consoles that are connected by a wireless adapter, which means games that support local system link play can be taken advantage of even if the consoles are not connected through a physical cable. 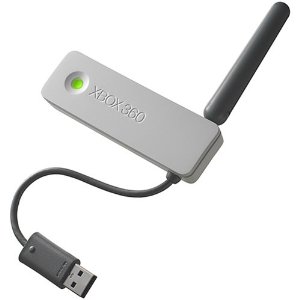 includes support for 802.11 a/b/g wireless networks. Microsoft claims the Wireless G network adapter provides support for up to twice the normal range of an a/b/g enabled router, which basically means the adapter can be used far from the wireless transmitter. Microsoft even claims the Xbox 360 wireless adapter is strong enough to operate in a “wireless congested environment”.

includes support for 802.11 a/b/g wireless networks, but what sets the Wireless N adapter apart from the other model is the fact that it supports N based connection networks as well. The Xbox 360 wireless adapter N is compatible with dual band 5GHz and 2.4Ghz wireless networks, which means it has a greater compatibility range.

The Xbox 360 wireless adapter N includes two antennas for increased connectivity, and is only available in black which is meant to match the new Xbox 360 Elite and Slim console models. 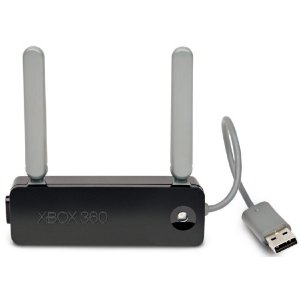 Wireless N technology is fairly new and is considered by many to still be experimental, which basically means the supporting software is still under development. Wireless N routers generally have a much wider signal range and provide faster transfer speeds for computer to computer file sharing, but have no confirmed speed changes relating to internet streaming and connectivity. 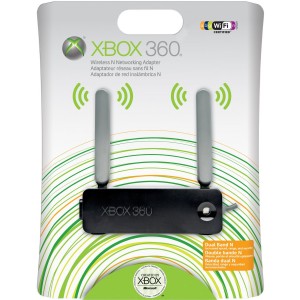 All Xbox 360 wireless adapters (both internal and external) support only WEP, WPA and WPA2 based network encryption.

It is possible to use third party wireless adapters and wireless bridges with the Xbox 360 console but such accessories are not supported or endorsed by Microsoft.