This list of videos was compiled by Ladbrokes Bingo.

There are many die hard gamers out there who simply can’t accept that the game ends once the console is switched off.

Feeling overwhelming withdrawal, such passionate gamers are forced to recreate their favourite aspects of virtual reality in real life scenarios; often with astonishing attention to detail and ingenuity. Here are some rather cool examples. 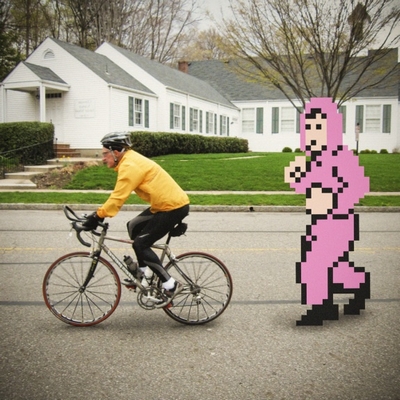 Continuing with Guillaume Reymond’s GAME OVER project, here is his rather clever version of the arcade smash Space Invaders; with (yet again) a human rather than alien dimension. It certainly evokes gaming memories from yesteryear and the people-pixel laser fire is a blast.

Video Game in a Box from Teague Labs on Vimeo.

Take a look at this extremely creative ‘Super Mario Bros in a box’ contraption, made from cardboard and fully side scrolling. Players twist a knob to avoid obstacles like the villainous Goombas. To think, Nintendo wasted all that money on microchips!

Angry Birds in the Flesh

Using some basic but effective computer video effects, these guys catapult a flock of fowl from the runaway hit game Angry Birds into the real world and send the squad of squawkers hurtling towards their targets for some explosive fun. This would definitely be as addictive as the online version, which is difficult to turn off once the flinging begins.

Returning to the ingenious Guillaume Reymond’s GAME OVER project, here’s a human version of the arcade smash Pac-Man, made using stop motion video filmed over four hours and a total of 111 people-pixels clad in colour-coded clothing.

The final video from Guillaume Reymond’s GAME OVER project, here’s a human version of the all time blockbuster Tetris. Again realised using stop motion video, the colour-coded people-pixels are seated in the famous block formations instantly recognisable from the popular puzzler that made the Game Boy a surefire success.

Who else remembers idling away hours on the awesome Duck Hunt which came bundled with the NES and a plastic light gun with highly dubious accuracy. Using basic video effects, these guys have created a nice little scenario down at their local lake, based on the brilliant hunting sim. But where’s the mutt?

Pokémon: Battle in the Suburbs

Quite an accurate reproduction of the least threatening fighting game ever made, this gaudy video recreation of the Pokémon phenomenon doesn’t take itself too seriously. Capturing the colourful cartoon nature of the frankly weird worldwide card collecting hit, the guys play it for laughs with some nice effects and costumes. Did you get bitten by the Pokémon bug?

While it won’t win any Oscars, this is quite an accurate reimagining and realisation of the notoriously violent GTA IV. Including some nicely executed cut scenes, not to mention some nicely executed people; this homemade film version of the free roaming shooter deserves some credit for effort. Will there be a Hollywood GTA adaptation one day?

Now this is cool. Comparing the real life experience of driving on the Fuji race track with the in game experience of racing on the same track in Gran Turismo 5, this video is really interesting and brilliantly executed. Which version do you prefer, reality or virtual racing? One thing’s for sure, a crash in the virtual world would be easier to shrug off than in the real world!