Professional gamers require professional gaming systems. For the true players, the Xbox 360 or PS3 just isn’t enough. One must attain the gamer’s system. Unless of course you already have a MacBook Pro…

But if not, the question is: which one do you buy? Well, that depends on what you’re looking for, doesn’t it?

Alienware M11x vs. ASUS Republic of Gamers: The Trek or The Force

The UFO trend has been fizzling, but only slightly. One thing that is hardly identifiable as a computer is the Alienware M11x Series. This gaming laptop is built for the pro gamer in more ways than one. With its sleek, stealthy exterior and its red glowing keyboard, the Alienware M11x is hard to miss, if nothing else.

There seems to be a definitive split between opinions on this barely identifiable Dell marketing exploit. Not much different the UFO craze, really. You either believe or you don’t. With this computer, you either love it or you hate it.

So why do those who feel that the notebook is ‘half-empty’ feel the way they do? Well, I know one reason: bulk. The laptop computer is not only massively over-sized, it is also heavier than lead. The processing power isn’t any greater than a smaller, lighter PC; so what’s the point? That’s where the ‘half-full’ consumers come into play. 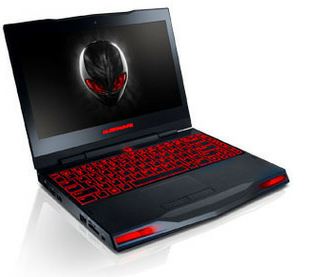 If you like a gilded cage, you’ll love hauling this hunk of technology around. It’s from a galaxy far, far away and has portability from long, long ago. Be sure to save yourself some room, because you’ll need an oak desk to support this ludicrously massive notebook; and if you want to move it, you’ll finally get around to that workout that you have been planning.

If all else fails, you could use it as the front end of muscle car, which is what it reminds me of when I see it.

Marketing is something that can be subtle or obvious. The ASUS Republic of Gamers doesn’t hide the fact that they are out to grab a few of the avid Star Wars Republic players. And, odds are: they will. Why? Because this system is superior in many ways. While the Alienware packs the capability, it doesn’t exactly come with the same portability as the ASUS.

The ASUS comes with a 2nd generation Intel Core i7-2670QM processor, which you can get on the Alienware. But let’s be realistic: I’m obviously biased. I have witnessed the Alienware and I have seen the ASUS. If I were to buy a gaming computer, it would be… An Xbox 360.