Amazon has officially announced to the public that it will soon acquire Kiva Systems for a total of $775 million. Kiva Systems is essentially a shipping and processing source that uses fully automated hardware and software to speed up the packing and shipping process.

In an effort to help with it’s further expansions, Amazon has acquired Kiva Systems so that it can integrate all automated hardware and software into their own consumer fulfillment centers.

The acquisition would allow Amazon to integrate the autonomous robots and control software, which Kiva currently uses, into their own customer fulfillment centers. Ultimately, this will help speed up Amazon’s overall processing time leading to happier customers in the long run – should the Kiva hardware and software work as it was intended.

Kiva Systems uses fully automated mobile robots and advanced software to increase productivity. The robots properly locate items and packages which are carried to physical workers who then package the item and ship it to the proper location. Kiva founder Mike Mountz said that the company produces, “two-to-four times as many orders per hour as they have done the old way”. 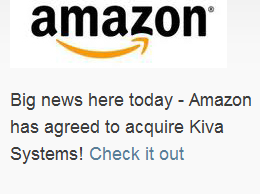 Amazon’s VP of global customer fulfillment Dave Clark, spoke up about the purchase, “Amazon has long used automation in its fulfillment centers, and Kiva’s technology is another way to improve productivity by bringing the products directly to employees to pick, pack and stow. Kiva shares our passion for invention, and we look forward to supporting their continued growth.”

In other words, Amazon is no stranger to automated systems but the new technology from Kiva will allow employees to directly interact with autonomous robots to speed up the process. It would seem as though currently, Amazon has no direct interaction between employees and automated systems which likely includes a few extra steps before employees can get to the packing and shipping process.

Surely this is a great acquisition for Amazon who stores products in various local warehouses, and then ships directly to the consumer. A majority of products sold through Amazon have been made available through one of numerous partner companies. So generally the individual Amazon warehouses are home to a wide variety of products and items. This acquisition couldn’t come at a better time for Amazon as it plans to open a one million square foot fulfillment center in Delaware, that will cost a total of $90 million and will help create approximately 850 full-time jobs.

As mentioned above, the Amazon fulfillment centers allow the company to store inventory from third party vendors and partner companies, while also creating a hub that can be used to process customer orders so employees may package and ship the relevant items.

The new Delaware fulfillment center, which will be built in Middletown, will compliment the pre-existing facility (originally built in 1997), which will still remain in New Castle, and both facilities will cover different areas. 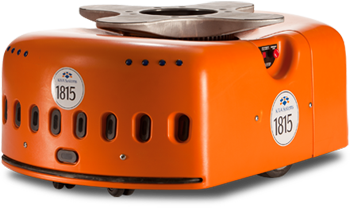 The expected closing date for the acquisition is sometime in the second quarter of 2012, and when it’s complete Amazon will acquire all of Kiva’s shares (approved by shareholders) totaling an approximate $775 million in cash. When the acquisition finally does close, the Kiva Systems’ headquarters will remain in North Redding, Massachusetts. Considering the Kiva headquarters will remain, it’s likely that the company will not be swallowed up by Amazon and will instead continue diligently working as it has- only now under the guise of also helping Amazon grow instead of just it’s own name.

The founder and CEO of Kiva Systems, Mike Mountz commented, “For the past ten years, the Kiva team has been focused on creating innovative material handling technologies. I’m delighted that Amazon is supporting our growth so that we can provide even more valuable solutions in the coming years.”

For those who are more interested in the business lingo, you can check out the official press release from Kiva and Amazon.

In other news related to Amazon, recently Amazon and Microsoft teamed up to sell the Nokia Lumia 800 bundle for similar prices.