Thanks to the latest release of Android, which has been redesigned specifically for tablets, consumers will start seeing more Android 3.0 Honeycomb tablet devices available on the market.

Acer has plunged into the touchscreen tablet world with the introduction of their Iconia A500 tablet, which is of the same vein as the Motorola Xoom.

But the Iconia A500 specs aren’t the only thing that’s slick; the exterior body is encased with a brushed aluminum finish and the screen is edged in a glossy black giving the tablet aesthetics a completely sexy look. Although if reports are correct, the A500 won’t be the lightest portable device on the block weighing in at 1.69 pounds. 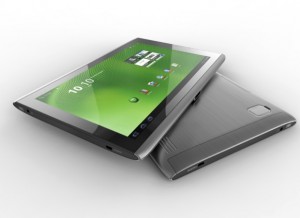 The Iconia A500 is additionally outfitted with a 2 megapixel front imager camera (webcam, video calls) a 5 megapixel rear camera, 16GB onboard storage, an HDMI output, and full WiFI 802.11 b/g/n support. Of course the cheaper model only comes equipped with WiFi, but a more expensive model (3G support) will be available this summer from AT&T.

The Acer Iconia display supports a 1280 x 800 maximum supported resolution and is backed by two 3260mAh batteries that have a quoted life cycle of eight hours total during HD video playback.

The Acer Iconia A500 will release on April 24th pitting it close enough to the release of the Xoom to be a rightful competitor. Speaking of the Xoom, the A500 includes all the same specs and features with exception to native Google Talk Video support which is exclusive to the Xoom tablet. So, if you’re in the market for a modern tablet but don’t want to dish out $600, it looks like Acer’s A500 will be your man.

Another tablet worth checking out is the Asus Eee Pad Transformer TF101, which is basically a tablet PC that includes a fully compatible (detachable) keyboard and docking station. 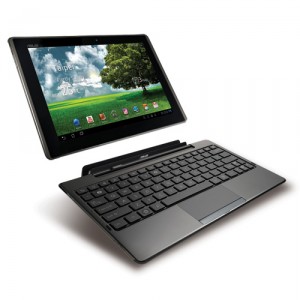 The Asus Transformer TF101 also features Honeycomb 3.0 support and includes the same performance specs as the A500. What sets the Transformer apart from traditional tablets is the dual USB ports, SD and microSD card slots, SRS supported 3D stereo and of course the external QWERTY keyboard.

Of course as mentioned above all the traditional specs are included too; a dual core Nvidia Tegra 2 1.0GHz processor, 1GB RAM, 16GB onboard storage with up to 32GB supported externally, a front (1.2M) and rear (5M) camera, multi-touch gesture support and an accelerometer.

The only bad news about the Asus Transformer is that there has been no permanent price tag or release date set as of the time of this writing. Which means that consumers can either wait for the Asus Transformer, or bite the bullet and pick up the Acer A500 or Motorola Xoom tablets.

For more information on the Motorola Xoom check out our feature on the tablet.

To honor the release of Android’s Honeycomb 3.0 OS we won’t even bother mentioning Apple’s arsenal.

Do you currently own an Android OS tablet? If the answer is yes which brand and model do you own and how do you feel about the device? Are you planning on purchasing the Motorola Xoom or Acer Iconia A500 soon, or have you chosen to wait for the Asus Transformer TF101? Please join the discussion and let us know your thoughts and opinions in the Tech Labs dedicated forum thread!