As far as clashes go, football fans claim that El Clasico, Real Madrid Vs FC Barcelona, is the biggest. But the greatest clash that smartphone-toting geeks all over care about is the frenemy spat of Apple and Google. Both appleism and googleism are serious religions for their respective fans. Appleism is an older faith, and had a resurrected god (Steve Jobs, who was fired from Apple, but returned to save the company from decline), but googleism has its fair share of fanatic supporters.

Eric Schmidt, CEO, Google sat on Apple’s board once when the two tech giants were close buddies. But over the years they have been growing apart and dangerously distant. One is a gadget-maker and the other is a search provider. It was a match made in heaven. But Google couldn’t resist the temptation of the mobile and smartphone market. It wanted a piece of the pie. Steve Jobs’ indignation was apparent over this issue. And now post his death; Apple has taken the war one step further by alienating themselves from Google services and products. Apple maps still have a long way to go, according to Eric Schmidt, no doubt, but knowing Apple, they will not leave any stone unturned in the process. 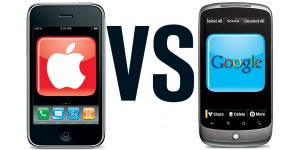 This ongoing cage match between Apple and Google over the unbounded mobile market is the “defining fight” in the industry, according to Google’s CEO Eric Schmidt. This highlights the hostility that has been growing between the two companies over the last few years. Schmidt further stated that he expects over a billion users to be running its Android in less than a year. Schmidt also said that there were already four times as many Android users running on gadgets made by the likes of Samsung electronics and that the scale of this battle was unprecedented.

Court battles and other legal issues aside, Google and Apple are currently locked over the maps issue. Apple’s attempt at an iOS map was not in the least successful. Apple CEO Tim Cook was forced to publicly apologize earlier this month following complaints that product based on Dutch digital map maker TomTom NV’s data contained rank geographic irregularities and gaps. According to Schmidt, Apple has learnt the hard way that maps are not easy. Google has invested millions of dollars to get their maps accurate. 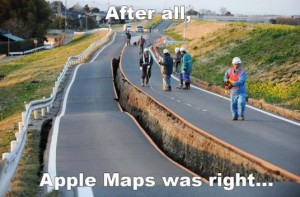 But the map fiasco is something that Apple can recover from very quickly. Apple’s vast cash reserves far outstrip those of Google. So this handicap of Apple is short lived. Google faces a far more serious problem. Separation from Apple has cost Google nearly a quarter or possibly more of its market share of users. According to a survey, more Apple users use Google maps and search services than Android users. This move has certainly struck Google in the heart of its core business i.e. search, since about 40 percent of mobile searches are for local things. The local market is a big one for Google in terms of advertising dollars, and search is an integral part of that.

Another place where Apple scores over Google is the Chinese market place. Following Google’s 2010 standoff with the Chinese government over web censorship and cyber attacks, Google doesn’t seem to be making any significant plans for China. Google relocated its search engine to Hong Kong following this episode. Chinese search engine Baidu Inc. has since emerged as number one in China. This is the only place in the world where the Google search engine is not dominant. And Google doesn’t seem to be eager to mend ties with the Chinese government any time soon.
Google’s intent is very clear about patching up with anyone. They are not backing down.