Several interesting features were unveiled by Samsung during the Galaxy S4 presentation. Some of them, like Smart Pause, are probably not going to be praised by many. Others like the Smart Scroll would be useful for quite a few. But there are some other features that look quite promising. For example, Samsung has collaborated with Mobeam to develop a new application. The less talked about barcode application could very well be the saving grace for Galaxy S4.

The principle on which the technology is based is pretty simple. Instead of only displaying the barcode, an infra-red (IR) proximity sensor also comes into play. This IR sensor sends a pattern in the form of pulses when kept under a barcode scanner. This enables a retailer to verify the claim. The technology may sound very simple but it is more than what meets the eye. It looks as if the reflection concept has been followed, but in actual, it is not so. Simply put, this feature is out of the normal league. It is for different kinds of backgrounds and could serve varied purposes.

The advantages are many. The middleman is removed; the company gets benefit which can then be shared with the customer. The security is enhanced even though the coupon (in the form of pulses) can be redeemed from anywhere. The coded form is secure and would require expertise in the field of hacking to be breached. It definitely is better than gift cards and paper coupons. Although Mobeam has partnered before with a major giant in the form of Proctor & Gamble, it is for the first time that it has collaborated with a handset manufacturing OEM. It is clear that this feature will help in boosting S4’s sales. And with an increased marketing budget for the device, the Korean manufacturer stands to gain even more. 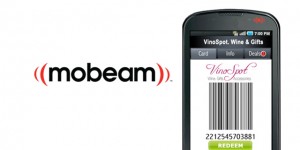 The situation is favorable for Mobeam as well as it would gain a lot from the association. The CEO, Mr. Chris Sellers has stated that Mobeam had been working with teams from Samsung for the past eighteen months. He also said that having not worked with handset OEMs previously had left a void in their learning and that this experience will teach them a lot. Many more handset manufacturing companies are now in talks with the San Francisco based company.
Right now, Samsung has just rolled out this new concept and is unsure of its future possibilities. But the feature is better than others like the ‘Wallet’, which essentially lets users store membership cards, coupons, etc.

This feature could be revived with the help of Mobeam. The electronics giant is fast overtaking Apple, thanks to the better and innovative features being added. Apple has not been doing well lately. Eyes would now be on the to-be released iPhone. However, if Samsung continues to upgrade its previous handsets only with small changes, it will be doing irreparable damage to itself.