ICANN, the non-profit organization that is responsible for managing top-level domain name space, has approved the creation of website addresses ending in corporate and organization names (gTLD) like .apple, .canon, .nyc and so on. The ICANN’s board of directors meeting was held in Singapore. There were 13 votes in favor of the brand name domains program, 1 against, and 2 abstaining.

“ICANN has opened the Internet’s addressing system to the limitless possibilities of the human imagination. No one can predict where this historic decision will take us,” said Rod Beckstrom, President and Chief Executive Officer of ICANN.

According to the announcement made by the ICANN, the new gTLDs will enable companies to take better control of their brands by providing with with specific domains like .eco or .tree for example. A new domain name suffix will carry a $185,000 application fee and costs $25,000 a year to maintain. Applications for the same will be accepted between 12 January 2012 and 12 April 2012. ICANN is expecting as many as a thousand applications, mostly from recognized companies and brands.

ICANN says that the fee is will be fully funded and revenue neutral. According to the application guidebook, “this deposit amount will be credited against the evaluation fee for each application. The deposit requirement is in place to help reduce the risk of frivolous access to the online application system.”

ICANN plans to launch a campaign to advertise the new brand name domains program. So far, 120 parties have already expressed interest in the program and is expecting more to come. They also mentioned that they will auction off domains if multiple parties have legitimate claims, but it expects companies will likely strike deals among themselves to avoid public auction.

By this, ICANN will increase the number of domain ending from the current 22 gTLDs, along with about 250 country level domains. Time alone can tell us how the new generic top-level domains (gTLDs) will succeed, but for sure, it will help the domain name registrars and ICANN.

There could be hundreds of possibilities with the new gTLDs and an useful example list of which can be found here. 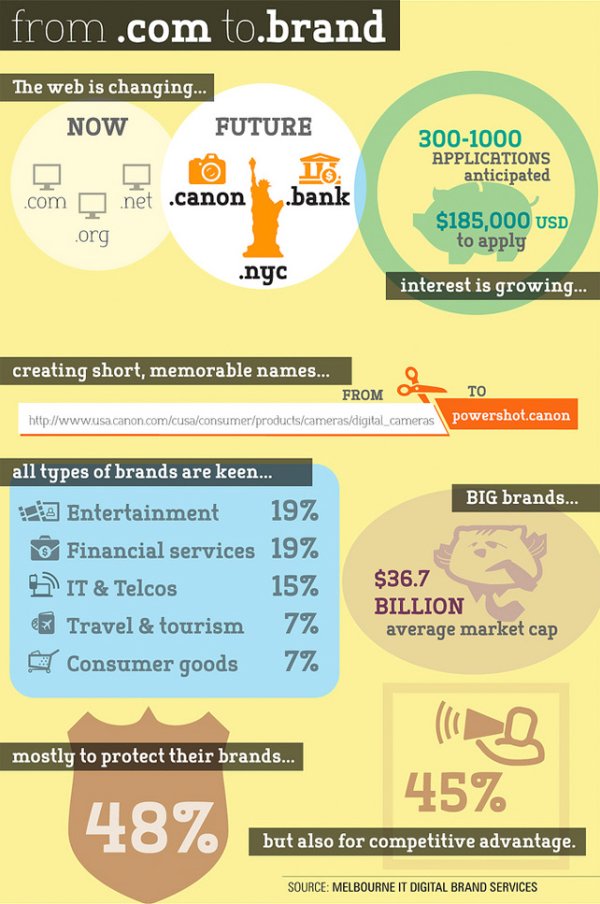