The biggest problem encountered by mobile developers in their line of work is application crashes. And the need of the moment for them has to be a better crash detection system. This was the main intention behind the development of Bugsnag. Simon Maynard and James Smith launched this revolutionary new venture aiming to tackle this great snag. Their endeavor to reconcile all the fragmented list of point solutions currently in use and bring certain continuity to the process of capturing errors in their apps resulted in the creation of Bugsnag. Bugsnag is an extremely affordable and intelligent full-stack monitoring product that allows businesses to keep track of errors arising in mobile and web applications simultaneously by means of a single dashboard.

Three judgmental months of beta testing later, the app is now live and gaining traction steadily. Currently, tracking an average figure of 800k crashes every day, partly due to adoption by big names including LinkedIn, Storenvy, Svtle, and Treehouse, among others. Gladdened by the response, the founders have decided to open up their app to the masses.

The app was officially launched recently. Bugsnag has an interactive crash detection system that allows businesses to gather diagnostic information from their mobile and web applications and instantly ping the development teams over SMS, e-mail or chat regarding the issue. The intelligent dashboard in Bugsnag aims to provide developers with increased visibility of app errors in real-time. It allows the developers to obtain precise location of where the error has occurred. The app takes extensive data on regarding the time of error occurrence, the total number of users affected by the said glitch and which available version of their respective app was glitching.

The world of app-making is a vast enterprise. The competition is on a global scale. So you either have the latest idea or you don’t. There are no second places. Bugsnag also chooses to be very dissimilar from its competitors putting its faith in originality and integrity. Bugsnag platform has been designed to monitor entire stacks, thus allowing developers to keep track of the crashes on both web-based and mobile applications simultaneously. 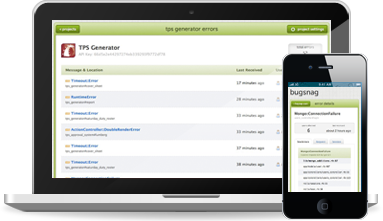 Of course Bugsnag isn’t the first service that offers a bug detection system. There are loads of others in terms of options. But they all cater to some individual problems. Crittercism for instance, monitors bug crashes in iOS, HTML5 and Android applications while companies like Exceptional and Airbrake cater to web applications. But the greatest feature of Bugsnag is that it is catering for both platforms. The ability to effectively deal with the back-end issues of an app is pivotal for businesses to reach maximum user satisfaction and thus is directly related to the apps success.

Bugsnag allows for integration with key issue tracking services and enables users to properly prioritize their resources and ensures the continuity of the workflow. The platform is available for purchase and comes with a base plan of $29 per month and encompasses features such as ticket creation, error notification and encryption. There is also the added benefit of the EC2-style pricing scheme for high volume users.