Facebook is the world’s favorite haunt. There are millions of people logged on to Facebook at any given moment. Your news feed is generally littered with information sourced from your friends. Facebook has recognized the importance of the news feed. Facebook is currently looking into novel ways to filter a users news feed. According to some sources, larger images and ads based solely on images are coming to mobile and web platforms. Facebook is completely depending on the new and additional streams.

We basically crave for information. We consciously devour the news feed presented to us and still not satisfied, we tend to look for more. At this juncture, the news feed falls short and tends to repeat feed already perused. Starting the first week of March, Facebook will revamp its news feed and unveil its ‘new look’. Assuming that this works, we may be spending more time on Facebook than usual. Consequently, we may also see advertisements intensifying. The news feed has been largely unchanged since Facebook launched. Access to content-specific feeds has been hard to come-by and the available sorting options on the whole, plainly re-shuffle current content rather than coming out with different stories.

Buried Feeds
Facebook has been actively piling up a substantial amount of data in the past year. The music feed was a forward step to dig up music content not simply from friend’s pages but also from popular musicians’ pages. Feeds like this are generally lost among random tabs on the sidebar. Promoting them with cohesively with prominence will result in more users turning to them for news from the general feed.

There was immense speculation that the launch of news feed will also see the imminent launch of the video feeds. It is well known that Facebook aspires to compete with the popular micro-blogging site Twitter as a surfacing medium for news. Laws on video restrictions hampered the music feed but there was no word on the coveted news or the photo feed. A plain photo-only feed can go a long way with most users. 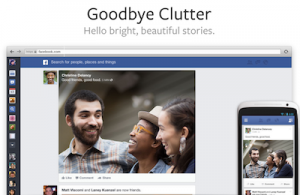 Facebook’s latest “news feed” design aims to be extra vivid and immersive. With an additional real-time feel, the news feed design needs to do away with the hindrances like sidebars and tickers and free up more feed space for fresh stories and images. This ploy would certainly keep us immersed in the content coming from our friends. Also this newly liberated space can be instrumental in focusing the ads without being bothersome. Facebook needs to stop fiddling with search and the likes, focusing mainly on its highly-trafficked property. Improved news feed advertisements could really earn Facebook a good amount of money and make a monumental difference to its business.

After the many years, Facebook spent on developing its app platform, graph search and the profile, Facebook’s most under-rated asset, will finally see some polish. Nothing endears Facebook to the public like the newsfeed. It delivers a wholesome and comely appearance to this mega global network. It is ambient, intimate and brings people across the world closer.