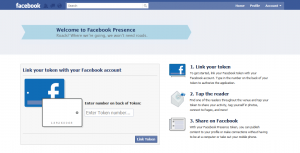 At the Facebook F8 Conference in San Francisco on April 21, 2010 the company flashed a cool feature known as the Facebook Presence. According to the dedicated Presence page Facebook claims, “Roads? Where we’re going we don’t need roads.” But it appears however roads will still be the required method of travel. It’s a shame considering the widespread idea of Facebook Presence incited a wildfire of techie excitement. 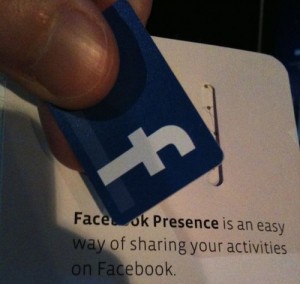 At the F8 Conference developers handed out unique RFID cards that attendees could swipe at certain locations in the venue and it would subsequently update their status on their current location. It is basically a clone implementation of what can be seen at Facebook headquarters. According to Facebook the same reader device installed within their company HQ allowed “Employees to tap their badge, get their photo taken, and generate a feed story whilst grabbing a beer with friends”.

Pedram Keyani and George Lee (Facebook developers) designed a card reader which debuted at a Facebook Hackathon, it was meant to allow employees, and visitors, the option to share when they were “having a beer”. Basically the small RFID card or “token” has a custom number which correlates to the user’s FB account. The user must then swipe the card in front of a “reader” device which will automatically update their personal Facebook profile status with their current location.

The developers used the same method at the F8 Conference to allow attendees to update their Facebook status “without having to be at a computer or take out their mobile phones”.

Techies everywhere went haywire after seeing this cool feature, and as electronic enthusiasts do, began drooling over the idea. But according to Facebook, “Facebook Presence” is not a feature that will soon be developed and integrated – in fact it will not be developed at all. They have dubbed the “Presence” simply a “Hack-a-Thon project”.

“Facebook Presence” will not become one of the countless Facebook applications in the ever-growing site library. The project was simply showing off their cool new “places” feature which allows users the option to share their current location. 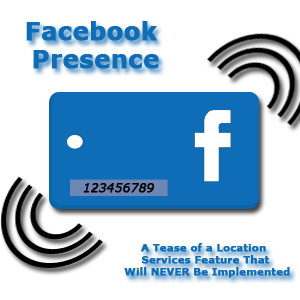 On a professional note the new “Facebook Presence” feature would have been great when using Facebook for business. It would allow local businesses to integrate social media marketing on a more widespread scale, and earn free advertising from users posting their location. But alas the same “presence” feature will not be integrated any time soon.

Before the conference, and slightly after Facebook developers made a few announcements, it was believed that Facebook was competing with Four-Square’s similar location services platform. Some even went so far to claim that Facebook was picking up Four-Square in a purchase. While the idea is certainly still plausible, it does not seem likely any of these claims will come into fruition.

That is not to say that Facebook will not acquire Four-Square sometime in the future. With the amount of denero FB seems to have accrued, anything is possible. It just means that for now, we will have to take Facebook’s “places” feature for what it is and wait to see how it develops further.