The simple idea of checking into your local haunts was a very whimsical one at first. But these past few years, the growth of foursquare has illustrated that belief in an idea can take it places, regardless of the relevance of the idea at that time. Foursquare certainly has a product that fits multiple buckets. The company released an interactive, topographical map that plots over 500,000 check-in’s in the previous three months.

The main takeaway from this is that, Foursquare is no longer a product limited to the Silicon Valley. The reach of foursquare is almost worldwide. Since the initial launch in 2009, the app released in 10 key cities has now multiplies leaps and bounds to include 35 million registered users who are globe-trotting as you read.

Venture capitalists are queuing up day-by-day to get a piece of the foursquare action. At this crucial juncture the folks over at Foursquare need to analyze their core strengths to plan the next step. Foursquare’s main strength lies in the data they have managed to collect from users. The company seems to be gravitating towards being the utility and destination for anyone wishing to discover real places around the world. However the question what should they do is irksome.

Foursquare’s data scientists are working over-time to make it a real-world utility. The practical applications of foursquare are many-fold. Seems pretty big, the goal to become a mobile utility but they have the data for it. This is an excellent first step. People on the move generally tend to prefer apps that intelligently suggest new locations for them to explore. Using their foursquare is likely to look into the users past check-ins and determine which places he’s likely to visit and suggest only those.

In any particular city, the locals are quite knowledgeable about the popular areas in the city and also which places attract maximum attention and when. But what about someone new to the city? Foursquare intends to provide such relevant, real-time intelligence to every user who requests it. Just a glance at the check-in map below tells you the extent of Foursquare’s popularity. 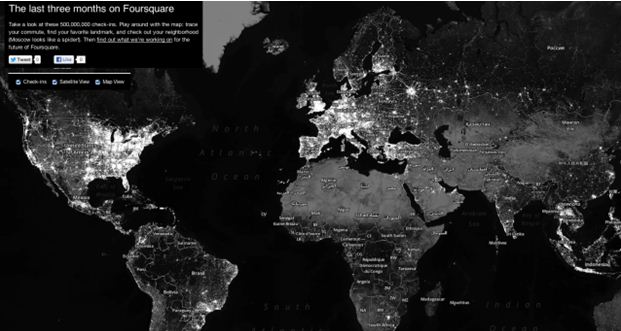 Look at the photograph below. It is a real-time signal from the Atlanta airport. Every time there is a new check-in the data gets even smarter. Foursquare provides contextual relevance around data that they collect. This isn’t something anybody can claim. 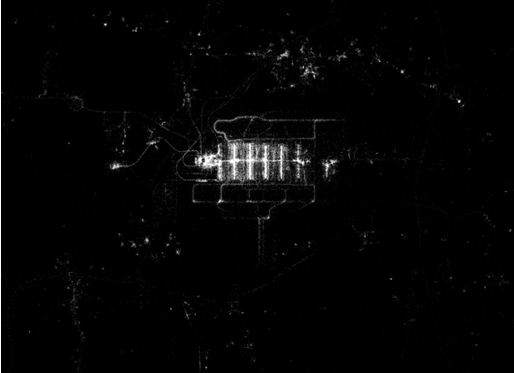 Millions of users and billions of check-ins and tips later, Foursquare has turned into the utility that people turn to for ideas pertaining to the next step of their adventure. Foursquare is certainly making the world we live in “easier to use”. People’s experiences in the new world have been bettered by the amazing devices that are ever-present in their pockets. And data is being generated in newer ways everyday. Thus when users delve into unfamiliar locations, the app detects this context while making its suggestions. This is a modern revolution in cartography where maps are made and presented to suit the needs of the user who demands it. These novel maps will be now created by billions of your peers in a collaborative effort.

Whether you check-in with the app or not, Foursquare can still offer value to you using the data it has piled over the period of its existence. The data is now beyond anything imagined. It is a global phenomenon and it is growing.