Do you drink NOS energy drinks, and do you love the Assassin’s Creed series? We’ve got some great news for you!

Sure those two things are completely different, but if you’re a fan of both you’re in for some pretty exciting news.

Ubisoft and Nos energy drink have partnered to offer exclusive Assassin’s Creed III content to loyal NOS drinkers! Yep, you heard us correctly. If you’re a regular drinker of NOS, you have the chance to earn a free multiplayer character for Assassin’s Creed 3. Ubisoft is even offering exclusive access, which means you’ll have the character way before the general public. Funny, how they don’t consider loyal NOS drinkers part of the general public.

Strangely enough, the content is being called ULC instead of DLC. It makes sense though; “unlockable content.”

From now until January 31st (2013), gamers and avid NOS drinkers, can unlock the Sharpshooter multiplayer character for Assassin’s Creed III, through the NOS Rewards Series.

The Sharpshooter is the “master of all firearms,” and as you can see from the image he’s certainly no pushover. Just look at the way he stands there aiming that musket. Now that’s a man with goals, with a future! Albeit, a future of slaughtering other characters in intense online battles… but we digress. 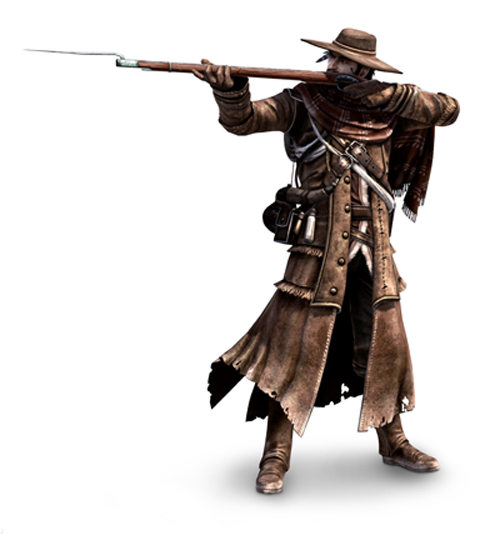 Unfortunately, it’s likely that even NOS drinkers are uneducated about the NOS Rewards Series.

You know those rewards programs that a lot of places offer these days? Namely the programs that banks offer as an incentive, for using your credit card? Well the NOS Rewards Series is just like those other programs. Just by drinking NOS regularly, you can earn points that can be redeemed for exclusive content, personalized experiences and limited-edition products. Obviously NOS is looking to reward loyal customers and draw in a much wider customer base.

To earn points, you just have to collect the codes that are included on specially marked cans of NOS, and then submit them at the NOS Rewards Series webpage. Of course, you’ll need to register and create a personal account so that they can relate the rewards points to you when you retrieve codes.

There’s no need to worry about cost though, because it’s all free! Well, aside from the fact that you have to buy a couple NOS energy drinks to earn points. 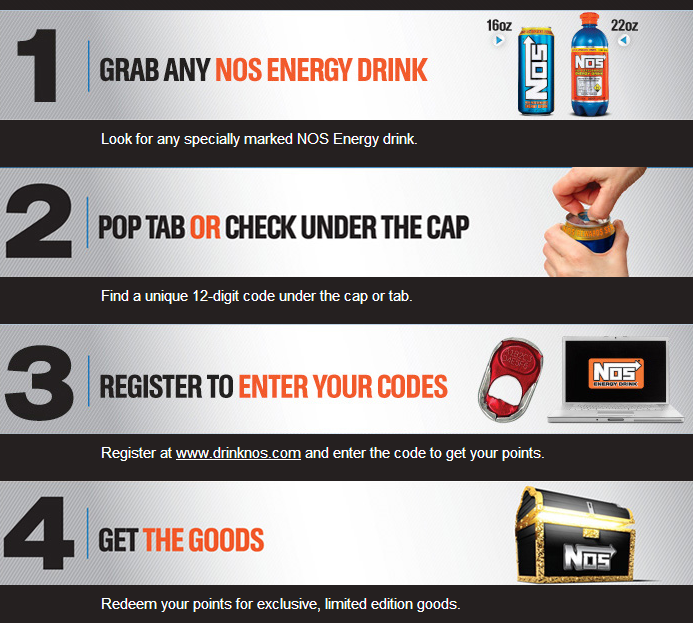 NOS has even made a game out of the whole point collecting program. There’s an online leaderboard that clearly lists all the top Rewards Series contributors. The leaderboard is separated into “all-time leaders,” and “weekly leaders.”

If you’re not a NOS drinker, then you might as well start. You’ll probably be drinking energy drinks anyways, might as well reap the rewards for all those three or four dollar splurges you’re having!

By now you’re probably thinking that it will take a lot of points to unlock that bad boy above.

All it takes is just one NOS Rewards Series point to unlock the early access to the character. Just one! That means all you need to do is down one NOS drink, register an account with NOS Rewards, and then claim the code!

NOS representatives state that the brand is about, “no nonsense, no gimmicks, and just the goods.” We’re going to have to agree with that statement.

Get The Sharpshooter ULC For Assassin’s Creed III Now

The exclusive content is free for both Xbox 360 and PS3 console players, so there actually are no restrictions. Considering the content is extremely easy to unlock, there’s no reason why you wouldn’t take this opportunity! 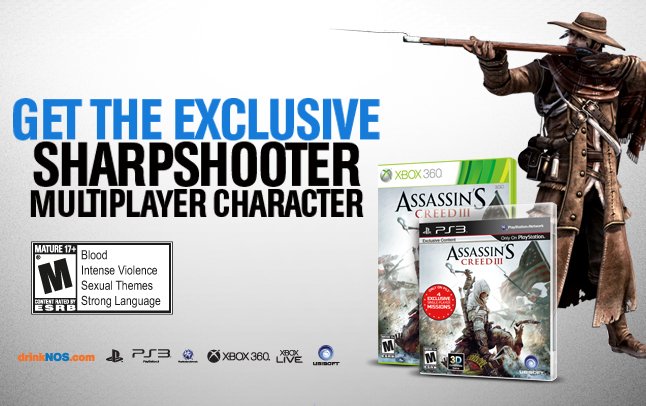 NOS is also running some alternate promotions through the NOS Rewards Series like the free entry into the Electronic Arts Sports Challenge Series. With only one redeemed NOS Rewards point you can earn an entry into a national challenge, endorsed by Virgin Gaming.

Now that you know there is nothing to lose, you might as well go sign up. We already did.