Google+ was announced a few weeks back and it has already created a lot of buzz around the Internet. Google+ could be the next big thing surpassing Facebook, the present social networking giant. When Google+ was launched, users could sign up via invites only. Due to high demand of Google+ invites, the invite feature had to be shut down. Today, Google boasts of having over 10 million users registered at Google Plus. The number was revealed by Larry Page during Google’s Q2 Conference Call. Google+ is currently under field-test and will require an invite from a current Google+ user in order to sign up for the new social network.

After the launch of Google+, people around the web doubted if the new social network would have a similar fate like Google Wave and Google Buzz. But sooner, people realized that Google+ had something fresh and new in it and thus Google+ saw a tremendous growth in no time. Google has taken the best out of Wave, Buzz and Orkut, and have integrated it in Google+ to make it more user friendly and social friendly. However, Google+ is restrained to Google’s services only. Users cannot share posts with third-party sites like Twitter and Facebook.

Google has learnt from its past failures and has taken every aspect of the user into consideration while creating Google Plus and has delivered the best, more than anyone could expect. Google+ is not just gaining popularity, but there are several handy extensions being developed based on Google Plus. Start G+ is one of those Google Plus extensions that automatically posts to Facebook and Twitter whenever you share something on Google Plus.

The new Windows desktop client, Gclient allows you to easily access your Google+ account right from your Windows system tray.

“Our free application Gclient integrates into the windows tray. Clicking on it will display a handy window showing your latest Google+ activities. This window allows you to post messages and to follow the activity of your circles.”

In order to use the desktop client application, you need to unlock it by registering yourself with an account. Once you have filled out the form, you will receive a free unlock code via email which you will have to enter in the “Unlock code” box. You can sign in to your Google+ account after you have unlocked the software. 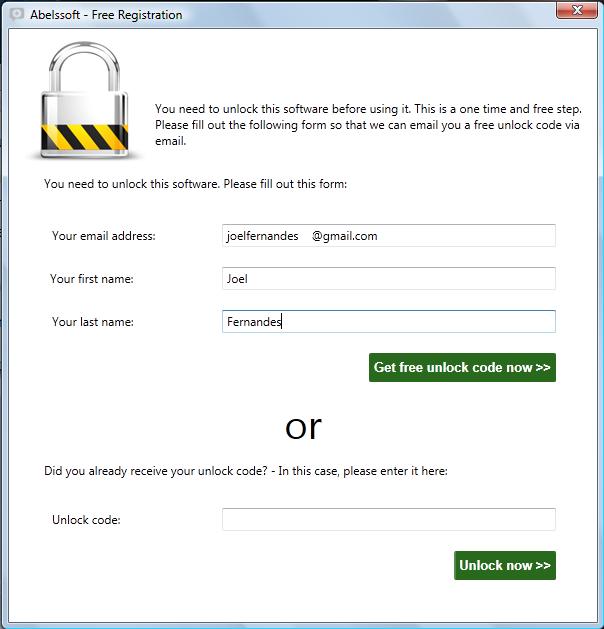 The desktop client is quite easy-to-use and has a very user-friendly interface. After you are logged in, the first thing you will see is your Google+ Stream. To access Circles, you need to click on the home button on the top-left corner. 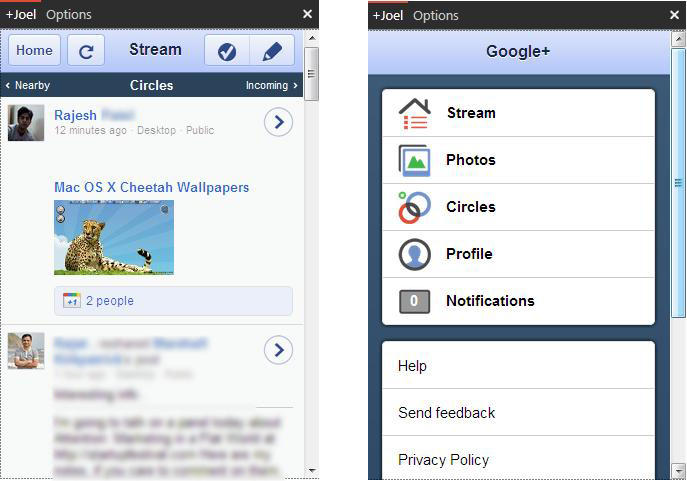 You can post updates or comments on other users’ post and +1 them as well. The desktop client also allows you to modify your profile, check your friends profile or add new members to your Circles.

The client was developed in order to provide easy access to your Google+ account and allow you to perform major tasks of Google+. The app is quite handy and is a must have app as it brings almost all features to desktop. However, the app does not support Hangouts and Huddles.

Other Useful Google Plus Extensions

#1. Replies and more for Google Plus

This Chrome extension adds “Reply to Author” and Reply option on Google plus posts to make it easy for you to mention them on your comment. That way, you don’t have to uses “+” or “@” signs. 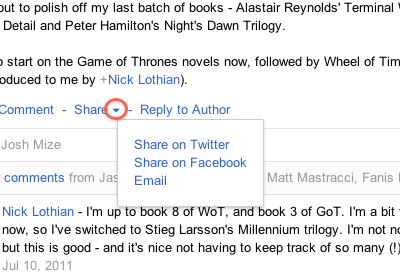 This extension keeps track of people talking about you or mentioning you in their conversation on Google Plus. You don’t have to permanently open one tab for Google Plus since this shows any new notifications on Chrome’s navigation bar.
Download: Notification Count

+Photo Zoom is a simple Google plus extension providing fast and simple zooming for photos within your Google+ Stream. Just hover over the image you wish to zoom and +Photo Zoom will load the enlarged version of the picture. 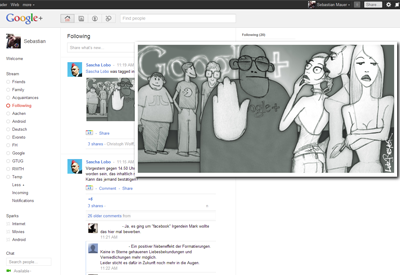 Don’t like something that was shared by your friend? Then you can “-1” it. This Chrome extension will add a -1 button on all posts in Google Plus. You can dislike a post by hitting the -1 button.

Must Have Google Plus Extensions