Not so long ago the Google glass was all that anyone could talk about. Google’s augmented reality project that was purported to take smart computing to the next level. Millions around the globe got to see the video preview of the Google glass in action. A lot has been said on the “Glass” front since then. But finding any news on this has become very rare. These futuristic goggles may not pop up on the streets anytime soon. So a random sighting of the Google glasses, worn by Sergey Brin, co-founder of Google no less, is an extremely rare and fortunate sighting indeed.

Noah Zerkin, a self-proclaimed enthusiast of “wearable computing” was on the subway. Imagine his pleasant surprise when he looked up to see Sergey Brin sitting on the opposite seat facing him looking quite relaxed. He then tweeted a picture of Sergey in a low-key wool cap and possibly the heights of tech eye wear that have now turned into Sergey’s trademark glasses. Not surprisingly this picture has been re-tweeted over a few hundred times. I suppose the universe has its own plan for coincidences. 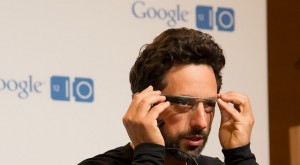 Earlier this month at CES ’13, a gentleman sporting orange eye gear was grabbing attention. This gentleman was Russ Mirrov, who was working as the electrical lead on the Google glass project. This seems to be a practice among Google employees to flaunt their project. Call it real-world testing or a marketing strategy to strategically expose the Glasses it sure is spiking interest in folks all around the globe.

Mirrov flaunted the glasses all around the place but amiably refused when folks for a trial opportunity. He did remind all present that the Google glass is even now, a work in progress. He did give a demo of some of its key features though. He really had people’s attention when he beginning snapping pictures using only voice commands.

The real purpose of Mirrov being there was not very hard to guess. He was very interested in what the people present there would want from the Google Glass. Fair amount of suggestions ensued. This is just a fore-runner of the “Glass Foundry” that is going to take place in New York and San Francisco. For two full days the developers in attendance will be allotted their own pair of glasses on site for testing.

Developers can have a first hand look at Glass from their own point of view and come up with any suggestions regarding what the final, finished version of the “Glass” could contain. Developers present at the Google developer conference last year also ordered some early explorer editions of the Google glass. There is no official say yet regarding any particular shipping date, but some estimate late Q1 shipping.

The Glass foundry is going to be held in New York on February 1st & 2nd. A registration only event, developers are queuing up in a frenzy to get entry to this meet and get their Google “geek” on.