Nerf Guns and Laser Tag comprise some of the most memorable activities in a great childhood. Keep in mind, we’re by no means saying they are the ONLY notable activities, just some outstanding ones. You can still think of your favorite action figures, or dolls, if you’re into that kind of thing.

It’s no surprise that laser tag can generate a touch of nostalgia for those of us who remember blasting away our best pals with Styrofoam darts and invisible lasers. The exploding sound of doom, which signaled a direct hit on the laser tag chest piece, was a tremendously satisfying sound. If you don’t have a clue what we’re talking about, we feel sorry for you.

Hex3 wants to bring some of those childhood memories back with the AppTag Laser Blaster that connects directly to Android and iPhone devices in order to provide an augmented reality experience. 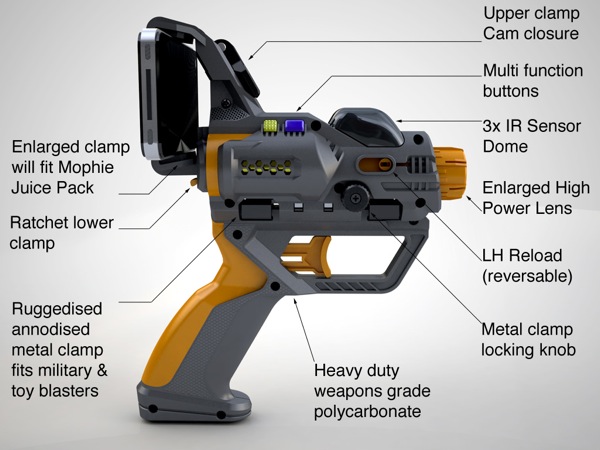 That title is a tagline lifted straight from the Hex3 website. They’re apparently claiming that the AppTag Laser Blaster will provide FPS gaming in the real world. 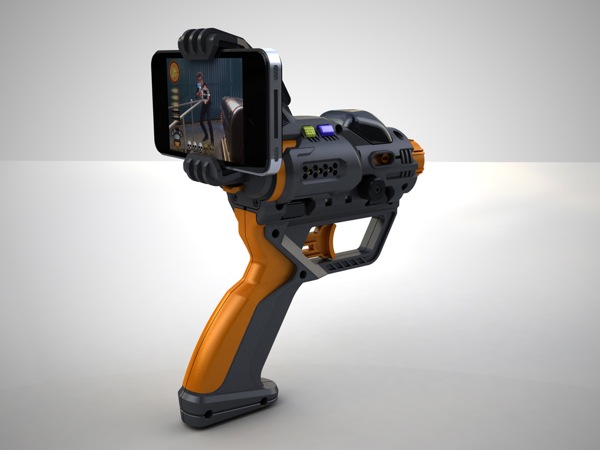 Nerf and Hasbro have both released similar products already, but the Hex3 aims to provide a slightly different platform.

With AppTag, the point is to shoot your friends (who, hopefully, also have one), but the game itself is a little more complicated than that. The AppTag mobile app displays elements in the real world to interact with through an augmented reality game. While playing, you can acquire weapons, ammo packs, health kits and body armor just as you would in a video game. The exception here is that the weapons and equipment are hidden in the real world instead of just within a fictional world.

You can play single player, or you can connect via Wi-Fi and experience multiplayer games with friends. There are even team-based game modes to allow you to play with others in large groups.

The AppTag is Compatible With Different Guns

The AppTag uses an accessory rail to connect the iPhone, iPod or Android phone to the unit. It can also be used with other guns if you so desire; other compatible guns include Nerf branded toys and the BuzzBee. 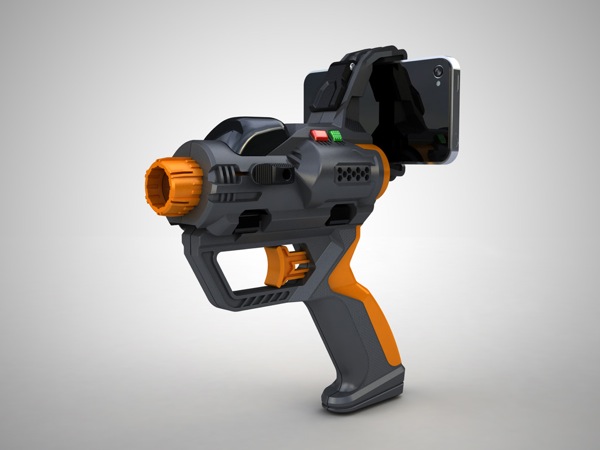 The AppTag unit communicates with devices using high frequency sound, so they claim it “just works” without requiring an advanced Bluetooth or Wi-Fi setup. In addition, the high frequency noises are out of the human hearing range and do not disturb animals either, because Hex3 claims the sound is “quite low.”

The headphone jack of the phone is not used for a connection, so the AppTag can still make use of the phone speakers for sound effects and the microphone for “walky talky communication.”

Of course, AppTag comes bundled with a gun holster for use with the device and app, but you can use your own gun thanks to the accessory rail and a distinctive rubberized trigger.

Shipping for the Hex3 AppTag Laser Blaster is estimated to begin in about 4-6 weeks. Currently, you can pre-order the AppTag for $59.99 via the official website.

At launch, the AppTag will include a handful of compatible apps and games, but the encouraging news is that Hex3 is also releasing an SDK so that developers can create their own apps for use with the included gun holster. The AppTag gun holster that is included in the bundle is outfitted with four buttons, a trigger and a reload switch.

It shouldn’t be too long before you’re running and gunning in the wild. Forget those pesky darts that always seem to get lost. The AppTag seems like an awesome way to experience augmented reality in the real world. Plus, the option to shoot your friends doesn’t hurt either. We all have our moments.