You’ve got Wi-Fi, I’ve got Wi-Fi, everyone’s got Wi-Fi. Unfortunately that’s not enough to boost the UK and the US to the top of the list – that is, the list of total households with Wi-Fi access.

According to a survey done by Strategy Analytics, 61% of US households now have Wi-Fi access while 73.3% of UK households have Wi-Fi access. Those numbers aren’t staggering at all considering recent technological advancements, but they certainly show that a lot of folks use Wi-Fi networks.

It makes sense in the general scheme of things, everyone seems to be connected to the internet these days. The internet is used for everything now, including online gaming, movie and media streaming, social media browsing, household entertainment and information access, and of course mobile markets. 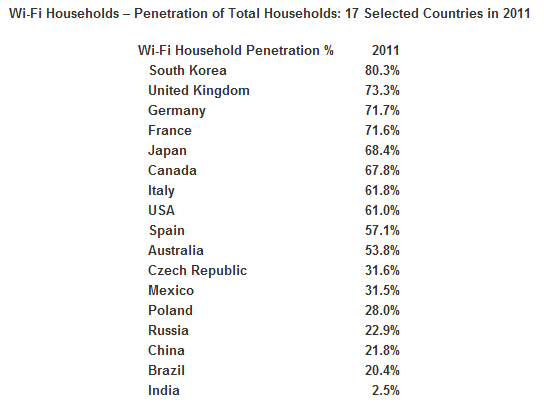 The US is eighth on the complete list, just below Italy and Canada, while the UK is second on the list, beat only by South Korea which has a total 80.3% of households using Wi-Fi networks within their homes.

But even though there’s a large number of US and UK households without home Wi-Fi access – the global growth rate of home Wi-Fi network installation is certainly rising.

In 2011, 439 million households installed home based wireless access points, which is the equivalent of 25 percent of all global households. The report shows that if the growth remains the same, by 2016 approximately 800 million households will be using wireless home access points which accounts for 42% total of the global household rate. Now that’s a staggering number, to briefly reiterate, by 2016 just over 42% of the global population will have access to a Wi-Fi network within their home.

Jia Wu, a Senior Analyst for Connected Home Devices, said, “Developed broadband markets are currently the leading countries in terms of Wi-Fi household penetration. However, because of its population size, China already has the highest number of Wi-Fi households in the world, followed by USA and Japan.”

China is predicted to boost their percentage rate significantly – the survey predicts 110 million Chinese households will likely create Wi-Fi access points in their homes within the next five years. That makes China the single most influential country in global Wi-Fi growth, as that boost alone will account for nearly 31% globally of the total Wi-Fi growth rate.

So what did we learn from all these percentages and all this jibberish about wireless access points? We learned that a lot of people live in China, and a lot of those people are going to start using Wi-Fi at home. Of course we also learned more information, like the US and UK are not the leading countries concerning total household Wi-Fi access. There’s also still a large percentage of the population without Wi-Fi internet access within their homes. The percentage of homes without Wi-Fi access is also directly related to the percentage of homes without Wi-Fi enabled devices – after all, if there’s no wireless device in the home there’s likely no demand for a Wi-Fi network.

But still, with the percentages in front of us it’s hard not to be amazed by how many people have Wi-Fi access points in their homes- we knew it was a lot, but not that much!

This is great news for the mobile product market, because it clearly underlines the need for internet ready devices and shows they’re needed well… pretty much everywhere.

To close out this very serious article, we’re going to pose one very serious question, which happens to be unrelated to the data: How many of those home Wi-Fi networks do you suppose are unsecured?

Readers may also be interested in checking out: 4 Advantages to Using a Wireless Broadband Dongle