It is that time again, where we head up another superb Indie Game of The Week. Instead of going with our usual hack and slash, action RPG or platformer title we’re going with a quaint point and click adventure. We’ve covered similar adventure titles before; you may remember Machinarium and Hoodwink.

The Indie Game of the Week is Deponia, which was developed by Daedalic Entertainment. As Daedalic claims, at one time they were referred to as the “Lucasarts from Germany” by Gamestar magazine.

“There’s only one word to describe the game; terrific! Lucasarts from Germany.” – Gamestar 88/100

Daedalic is known for their previous titles; Edna & Harvey: The Breakout, Edna and Harvey: Harvey’s New Eyes, and The Whispered World.

Deponia is a comedic, point and click adventure game a la Grim Fandango, Indiana Jones and the Fate of Atlantis, the Myst series and Gabriel Knight.

Indie Game of the Week: Deponia

“In Deponia, the world has degenerated into a vast garbage dump, in which the crotchety Rufus ekes out his sorry existence. He is part of the lowest social class, doomed to live his life in literal mountains of trash. He hopes for an opportunity to get into the world of the rich, who live in a floating city high above the clouds. Fate seems to smile on the snotty good-for-nothing when one day the attractive lady named Goal from the higher sector plummets into one of the trash heaps. Rufus decides to help the young woman out by taking her back to her husband. When he notices that Goal’s husband is a dead ringer for himself, he hatches a diabolical scheme to gain access to the upper world. However, things don’t work out quite as planned, since he has feelings for the beauty which limits his usual unscrupulousness.”

As with most adventure stories, the core element in Deponia’s plot is love. The story follows Rufus on his rather peculiar quest to build a better life for himself, while experiencing love, deceit and plenty of action. 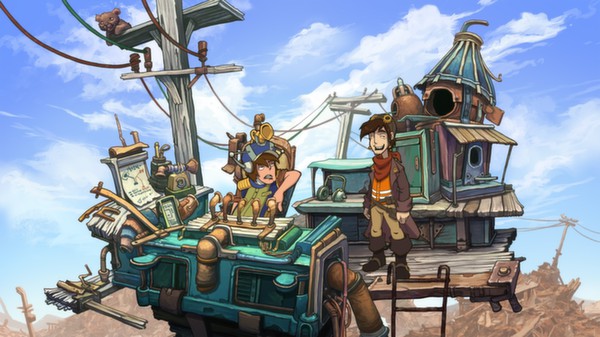 Rufus has been abandoned by his father on the planet of Deponia, which is essentially covered in garbage and trash. The citizens of Deponia have taken advantage of resources and turned the giant trash heap of a planet into a cozy little home, although the planet likely reeks.

Rufus plans to leave the planet of Deponia and head back to wherever it is that he came from, far off in space. During his elaborate scheme, Rufus accidentally incapacitates a young girl named Goal, and then decides to wake her in the hopes that she can help him escape Deponia.

Deponia is riddled with wit and humor, both of which are driven directly by its remarkably whacky cast of characters.

What Kind of Indie Game is Deponia

As we’ve already established, Deponia is a point and click adventure like the the Blackwell, Monkey Island and Myst series. It follows closely with the theme of the Lucasarts Monkey Island titles. Even the hand-drawn art style pays tribute to the classic age of adventure games. 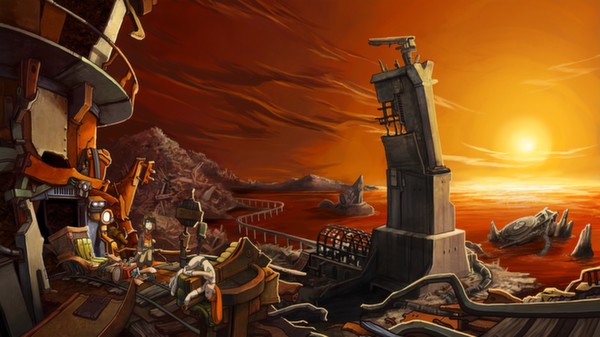 The first act of the game is slow and can seem rather dull, with predictable characters and a pretty lackluster introduction of Rufus and his inner motivations. Although, the slow first act doesn’t really matter once the second part kicks off, because that is where Deponia really shines.

Deponia is filled with quirky puzzles, incredibly imaginative aesthetics and enough humor to keep you chuckling the whole way through the game. As you progress through the world and solve your way through plenty of puzzles and challenges, the experience grows on you and leaves you with some warm and fuzzy feelings.

By the time the end of the game hits, you won’t actually care that the ending is kind of a letdown. The experience of playing Deponia is most certainly worth your time and will probably wash you in waves of nostalgia. That is, of course, if you have ever played some of the traditional point and click adventure titles we mentioned above.

Deponia is available now in several different languages, including English and German. We recommend purchasing the game via Steam. 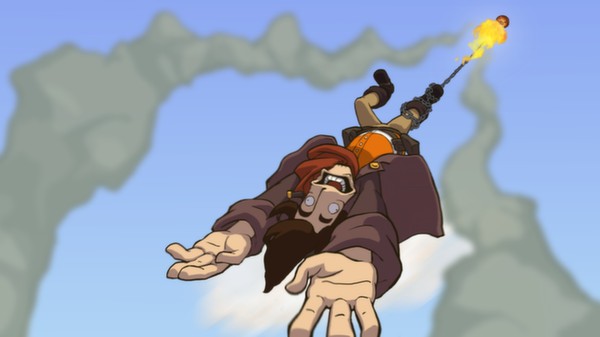 If you love indie games, as much as we do, feel free to check out our ongoing Indie Game of the Week series. We’ve covered some excellent titles that are unquestionably worth checking out!