Epic sidescrolling action is essentially a thing of the past. Games like Gunstar Heroes and Contra are relatively uncommon these days. Sometimes a side-scroller that’s worth playing, will slip by like ARES, Trine and NyxQuest but the amount of titles that are available out there are still limited.

More recently, indie side-scrollers have been used to test or introduce a new kind of gameplay like what happens in Braid, and Fez.

The grand old days of running, gunning and being an absolute badass are apparently long gone.

Thanks to one man, one beautiful and talented, indie developer named Aleksey Abramenko, those days are now back. With his latest game, you can run, gun and slaughter everything in a 2.5D world. His spectacular game is called, Intrusion 2, and it is our Indie Game of the Week.

Oh, and in it, you can ride wolves. 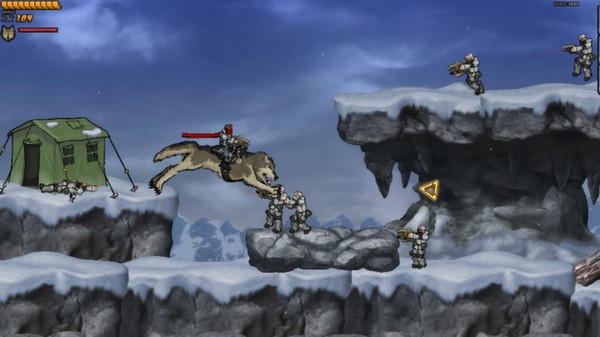 Indie Game of The Week: Intrusion 2

“Intrusion 2 is an action platformer set in a sci-fi environment on a reserve planet occupied by a hostile military corporation conducting forbidden weapon research. Intrusion 2 is inspired by classic 16bit era sidescrollers and focuses on classic fast-paced action combined with modern physics and animation.”

We’ve already pretty much revealed that Intrusion 2 is a badass, over-the-top action platformer. In case you don’t trust us, we’ve included this gameplay trailer to defend our position.

Now that you’ve seen the video, you should know that we only speak the truth here at The Tech Labs (sarcasm).

The first Intrusion was a flash based browser game, made by the same developer. Intrusion 2 is a significant step up from the first title and expands upon it immensely. 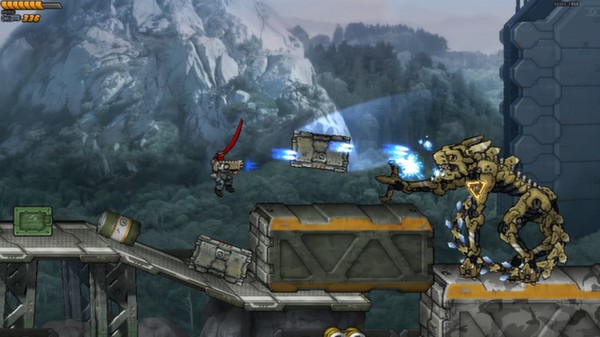 One of the best things about Intrusion 2 is the advanced control scheme. Usually when playing a sidescroller, you can only shoot in front of you, or diagonally, when jumping. Meaning if you fire your weapon and you happen to be jumping at the same time, the bullets will only move straight ahead, or at a diagonal angle respectively. That means you generally have to position your character in just the right spot to get a direct hit on enemies, and this can lead to a rather awkward experience.

With Intrusion 2, you can free-aim while jumping, which means you have full control over where the bullets travel. Even when you vault higher into the air, you still have the option to shoot 360 degrees around the main character. This kind of fluid and nonrestrictive aiming make the game so much more fun, than if you had to use the sluggish old-school method.

What Kind of Game is Intrusion 2?

Intrusion 2 features over-the-top action, bizarre enemies and intense boss battles; which is pretty much everything you’d expect from a modern 2D shooter. Except, with Intrusion 2, everything is just done right. There truly is no other way to describe it. Most of the time when you play a game, you encounter scenarios and in-game moments where you wonder to yourself how the developers could have implemented better mechanics. You begin think to yourself, what if they had just done this or that differently, the game would be so much better. For us, that never happened with Intrusion 2, everything is exactly as it should be, and the experience is incredibly gratifying. 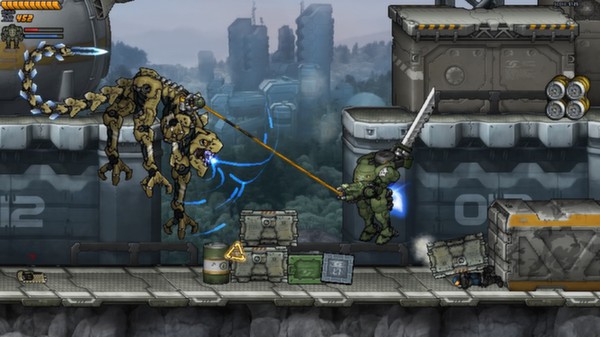 Throughout the game, you make use of several different weapons, all of which can be used frequently and swapped out whenever you want them. Each weapon has a specific purpose, and like with some of the best classic 2D shooters, you must figure out which weapons to use at exactly the right moment. The guns you have to choose from include, a pistol (dual-wield), a machine gun, a rail gun, a plasma rifle, and a grenade launcher. The rail gun can actually be shot, through walls, to take out enemies.

You can also take control of mechanized suits, which look like something plucked right of the Metal Slug series. There are three different kinds of mechs in Intrusion 2, including a rifle mech, sword mech, and a harpoon mech.

Each mech suit performs different actions. For example, the rifle mech uses heat seeking missiles and a rifle to fire upon enemies when the missiles are depleted. While the sword mech is equipped with a melee sword that does a tremendous amount of damage, but the mech itself moves slowly. Finally, the harpoon mech includes a bionic grapple arm that allows you to attach to enemies and then throw them away from you. The harpoon mech was our favorite, because you can grapple to virtually everything, and you can use the grapple to attach onto enemies in order to send them flying into the air. Sending enemies flying is always fun. 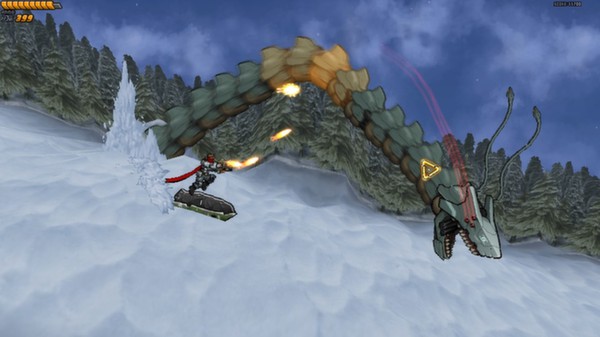 Intrusion 2 also makes use of something not commonly found in 2D shooters. It makes use of a realistic physics engine. Enemies, objects, and debris will behave just like in the real world, flopping casually all over the place when bumped or shot. You can even lift crates, and objects and throw them at enemies to injure or hinder them. Bodies will pile up as you gun down enemies, and you can then walk over the pile, Duke Nukem style. Oddly enough, this scenario is quite fun to reproduce in Intrusion 2. We spent a lot of our time gunning down enemies and toying with their flailing corpses.

Wow, that sounds dreadfully morbid, but we digress.

Intrusion 2 is a relatively short game, but it does contain a hard mode for alternate playthroughs – although, the hard mode isn’t actually that difficult.

The music can also become quite repetitive at times, but it certainly doesn’t detract from the action, it just becomes a trivial irritation when the action takes a break. Believe us though, the action hardly ever dissipates.

Intrusion 2 is undeniably on par with some of the classics, and it will go down as one of the best 2D side-scrollers of all time. If you think that’s a lofty statement, just play the game. Intrusion 2 is loads of fun, and even though the game is short, you’ll want to continue playing. It is rare when a game incites that kind of enthusiasm, especially when there isn’t much content.

Intrusion 2 is available now through Steam, or if you so desire you can buy a DRM free copy (along with a Steam key) through the official website.

If you love 2D shooters or traditional platformers, than Intrusion 2 won’t disappoint. In fact, if you love intense, in your face action then you should pick up Intrusion 2 with no questions asked. 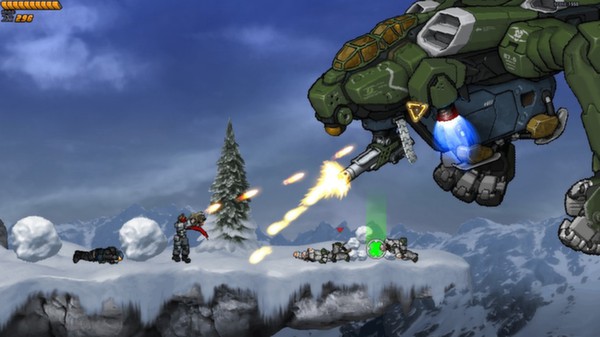 If you love games as much as we do, then make sure you check out our ongoing Indie Game of the Week series!