Every once in a great while we get a game that is the ultimate tribute to the retro 8-bit era of gaming. Usually, playing such a game, involves a genuine indie title that lacks any real depth or substance.

It’s no secret that a lot of the gaming world has been taken aback by retro art styles. Minecraft was an instant hit, and it had less than stellar graphics. It seems as though the gaming community as a whole, has latched on to the nostalgic feeling that retro style games cause.

If you can remember the early days of the Grand Theft Auto series, there were no fancy graphics or explosions, and there were no fancy car models or cut scenes. The first Grand Theft Auto titles were presented with 8-bit style graphics. They featured a top-down overhead camera view that followed the player as they ran and gunned their way through a traditional open world city.

Sure, the original titles weren’t nearly as advanced as the Grand Theft Auto games we have today, but they were certainly fun. They were so much fun that some folks would even love to play those old school games again.

We’ve got a game that is extraordinarily similar to the classic Grand Theft Auto titles yet it includes remarkably modern gameplay mechanics. The game we’re talking about is called Retro City Rampage, and it is our Indie Game of the Week. 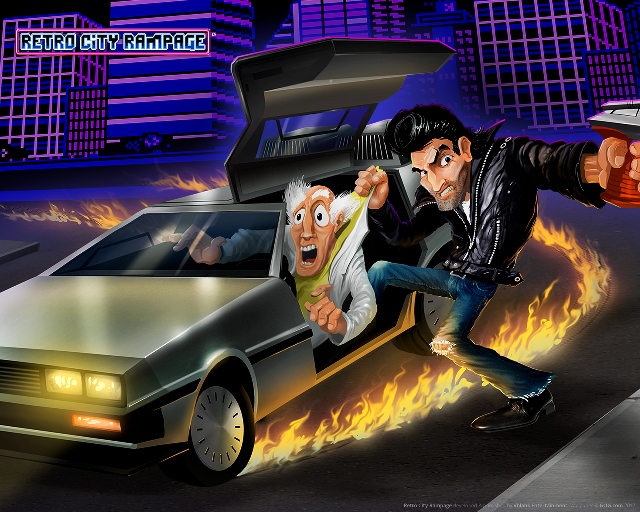 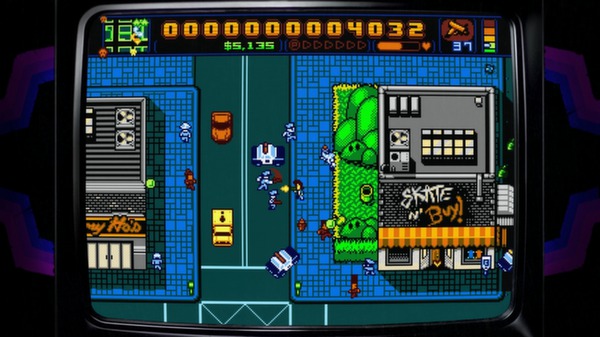 Retro City Rampage is an open-world arcade style game, that is presented in retro 8-bit style graphics. Of course, the color palette in Retro City Rampage is a little more diverse than classic titles. You will see lots and lots of beautiful scenery and colors in Retro, that much is true. Of course, if you don’t like 8-bit graphics to begin with, then you’ll probably call us liars and hate us, but that’s beside the point.

The product description for Retro City Rampage is as follows:

“Cruise through the open-world in over 40 stolen vehicles while outrunning the law and mowing down fellow citizens! Jump on pedestrians for coins, or use them for target practice with over 25 weapons and power-ups! WHOA!”

What Kind of Game is Retro City Rampage?

Retro City is Rampage is first and foremost a parody. It is painstakingly obvious as you play the game that the developer has tried to poke fun of every gaming and pop culture icon from the late 80s and early 90s. There are hundreds of original nods to some of the best movies and games out there.

The game follows a character named “Player,” who’s after crime centered fame and fortune in a city rightfully called Theftropolis.

When the game opens, you’ll participate in a heist led by a man known as the Jester, who is incredibly reminiscent of the Joker from the Dark Knight. After making a getaway in a bus and a rather amusing firefight, you run into time travelers who arrive in a phone booth. Without anywhere to go, you kick Bill and Ted out of their famed time travel device and jump in yourself. You are brought to the distant future, where an old white-haired doc in a Delorean finds you and vows to fix the broken time machine so you can return home. The story actually gets quite a bit more complicated than that, but you get the idea. There are lots of pop culture icons being made fun of in Retro City. 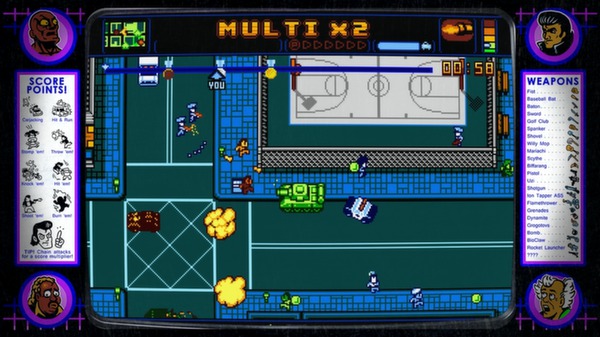 The game itself is relatively easy to play, and gameplay elements are almost exactly like the classic Grand Theft Auto series. You can wander the city streets and “borrow” vehicles to move around faster. Throughout your journey, you collect guns to blow things up, and you can even climb into a tank to wreak some havoc.

The beauty of Retro City Rampage is that you can certainly lose yourself in all the witty humor if you’re a long time video game and pop culture fan. If you weren’t around the 80s, you might miss a few references, but that’s okay there are plenty to go around.

Combat is nothing more than superficial hand to hand, or ranged shooting that uses an unusually shallow cover system. You can take cover behind objects when the bullets are really flying, but it’s not a trick vital to your survival. Otherwise, most of your life in Theftropolis will be spent driving around in vehicles mowing down pedestrians and pesky police officers.

There are several arcades spread throughout the city too. Video game arcades in Retro City Rampage allow you to play more than 30 additional mini games like Super Meat Boy and Bit Trip Runner. 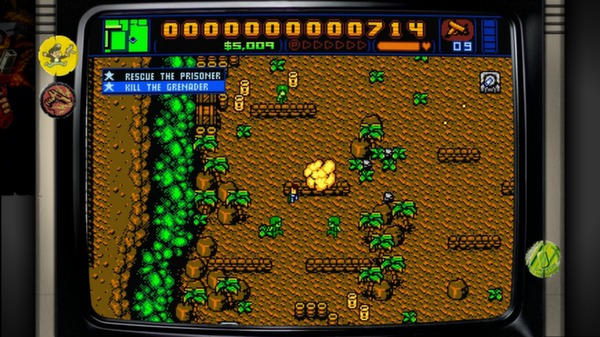 Retro City Rampage was developed by one man, Brian Provinciano. He designed the game to include all of his favorite things, and mashed them together in the 8-bit world of Theftropolis.

Retro City is not for everyone that much is true, but for those who have a history with NES games and late 80s pop culture in general, it will certainly provide a nostalgic experience. There isn’t much to keep you coming back for more later, but that’s okay.

Retro City Rampage is usually $14.99, and it’s available on a bunch of consoles and systems. We recommend picking it up for the PSVita if you have one, but Retro City is also available for PC via Steam. You could always give your money directly to the developer by purchasing through the official website.