And we’re back with another impressive Indie title in the Tech Labs Indie Game of the Week series. Before we get to the nitty gritty though, we’re going to drone on a bit about what kind of game we’ve chosen for this week and why it inspired us to write this pretty eccentric post. Okay, so maybe it’s not quite that nonconformist because we do this every week, but we’d still like to think it is.

Platformers are excellent, especially when they are developed well because they can offer so much more than just the usual sidescrolling action. Namely, games like the Jak and Daxter series, Crash Bandicoot series, and Tomb Raider come to mind. Sure, nothing we’ve just listed falls under the sidescrolling platformer genre, like old-school Sonic titles, but they are still platformers nonetheless.

Just what is a platformer you ask? Quite frankly, if you have to ask you probably shouldn’t be here reading about indie titles so we’re just going to direct your attention elsewhere for now.

The Indie Game of the Week is a charming, and somewhat peculiar, action platformer called Tiny And Big: Grandpa’s Leftovers. 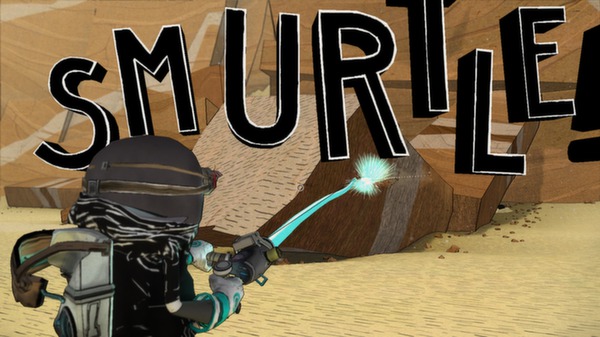 Indie Game of The Week: Tiny And Big – Grandpa’s Leftovers

Tiny And Big: Grandpa’s Leftovers is presented with hatch shaded, comic book style visuals. All the aesthetics have a hand-drawn appeal, and the game even features dynamic sound words to replicate a genuine comic book adventure. “Dynamic sound words” are essentially comic book style sound effect bubbles, which are typically used to signify the damage the protagonist is doling out on their enemies. You know, the wham, pow, smack effects.

You control Tiny, a nerdy pioneer of sorts, on a quest to find his most prized possession, a pair of white underpants that belonged to his Grandpa. You will travel through a diverse world in search of the underpants, and meet some strange characters along the way, including Tiny’s archnemesis Big.

What Type of Indie Game is Tiny And Big

Tiny And Big is an extraordinary platformer that features sand box gameplay which actually allows you to move through the game at your own pace. The environments are destructible and can be altered with any of Tiny’s fancy tools. 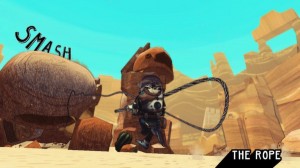 To climb, and navigate, your way through the world you will have to employ a grappling hook, rocket science tools (propels objects), and laser surgery to slice obstacles in your path. Each tool at Tiny’s disposal can be used to modify the environment and progress through the level. For instance, if you need to get up to a high ridge you can use laser surgery to slice through the bottom of nearby column, so it will fall and make a suitable ramp.

The beauty of Tiny And Big is that it is not presented in standard platformer style; that is you’re not constantly forced to run, jump, and climb through a predetermined level. Instead, you must forge your own way ahead by using the tools available to you.

It’s obvious that Tiny And Big uses realistic physics or else the objects would not respond properly. 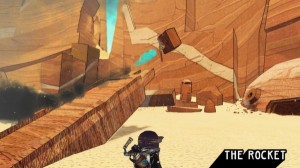 The Story is Awesome

You’re chasing down a pair of prized underpants! If that’s not outlandish and amusing enough, just wait until you start playing the game.

Throughout the game, you can also unlock indie music tracks; there are more than 15 songs to unlock according to the developers. 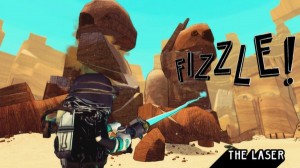 Tiny And Big is a fun filled platformer, that certainly offers up an unusual experience. The game is well worth the $10 price tag, but because it’s part of the Steam catalog you can expect a bargain price to be available sometime.

If you want to buy Tiny And Big right now, you can do so via the Steam digital distribution platform or directly via the developer’s website, Black Pants Game Studio. If you’re pretty cheap and don’t want to pay for anything just yet, you can also download a free demo to sample what Tiny And Big has to offer.

If platformers like Tiny And Big are not your foray, feel free to check out our complete Indie Game of the Week series.