JK Rowling, the famous author of the Harry Potter series, has proven publishers are no longer a necessity in the publication process thanks to her website Pottermore, at least when digital content is concerned.

Pottermore is dedicated to the digital aspect of the Harry Potter series and exclusively sells all digital versions of her books and alternate media. Rowling bypassed publishers’ sites and online bookstores and created her own digital platform model for selling her work.

Amazingly enough, Rowling also managed to convince book sellers like Amazon, Barnes and Noble and others to link directly to Pottermore instead of selling digital material through their own web stores. Obviously this marketing scheme has passed so many barriers because Rowling and her Harry Potter series are famous, but that doesn’t make it any less an amazing feat. 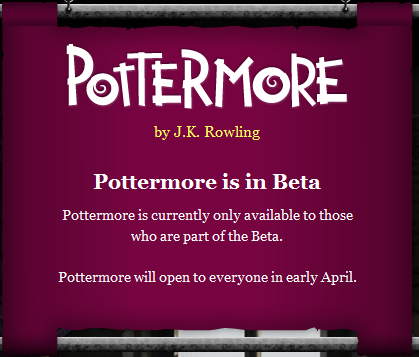 Let’s be clear however, Rowling didn’t exactly bypass all publishers, as her books were printed traditionally since their original publication date in 2005. She’s simply utilizing the success of the printed version to drive and promote the sales of her exclusive digital content. Riding previous success is not the complete marketing plan she’s using here, but you get the general idea.

As mentioned above, Pottermore is J.K. Rowling’s exclusive platform for marketing digital Harry Potter content and media. Currently the website is in the closed BETA stage, which means it’s only open to those participating; but it will soon open to everyone in “early April”. Harry Potter merchandise, audio books and the first ever eBooks of the series will all be exclusively available for purchase on Pottermore.

But Pottermore will be more than just a storefront, as Rowling intends to create an interactive community with activities that relate to each title in the longstanding series. As she clearly states in the Pottermore intro and announcement video, the site will be for fans of all ages and will feature games, trivia and exclusive content from the wide world of Harry Potter. 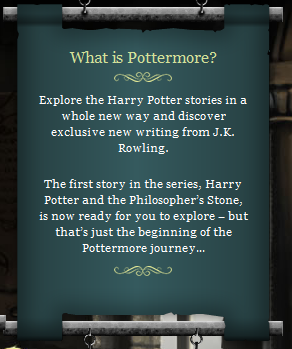 What’s really interesting is that even though the books have been completed, Rowling has stated her intent to release new Harry Potter content via the site. So for those few Harry Potter lovers out there who can’t come to grips with the fact that the series has finally ended, Pottermore is for you.

Why is Pottermore Such a Big Deal?

It may not be the first time an author or creative artist has done something like this, in fact many music artists currently use similar marketing techniques – but it is one of the few times a truly prominent artist has chosen to market content on their own.

Rowling doesn’t have to worry about paying most of her digital revenue to publishers, as she’s selling direct to consumers. Obviously there’s hidden costs and investments involved in the deal, and it’s hard to estimate exact numbers. It stands to reason that Rowling is certainly not collecting revenue in the full amount of the product from her digital sales, but the amount compared to what she would be getting if she had gone through publishers is much, much larger.

Mark Coker, the CEO of Smashwords, suggests that Rowling is likely getting 70-90 percent of her listed sales price, as opposed to the 12.5-17.5 percent which publishers would traditionally pass on to the author in royalties. Coker is no stranger to publication costs, as Smashwords is expressly dedicated to helping indie authors publish their digital content and media.

We don’t know about you, but we’d rather benefit from the larger sum of revenue like Rowling is currently doing – especially when concerning work solely produced by us.

Pottermore is not only setting a precedent for future digital platforms and marketing techniques, it’s also setting a precedent for future authors as well. Of course, if every single author in the world converted to a similar platform it’s highly unlikely they would all see the same amount of success – this is J.K. Rowling we’re talking about here. But the idea that authors can retain digital rights and sell their work directly to consumers without middlemen involved, is definitely a promising ideal for creative artists everywhere.

Coker claims, “This is a dark day, because now all big-name authors – the bread and butter of traditional publishers – are going to think twice before giving up their digital rights.”

But is a world where the creative artist makes most of the money for the work they produced, really a dark place?

Because of Pottermore Rowling is a Digital Pioneer 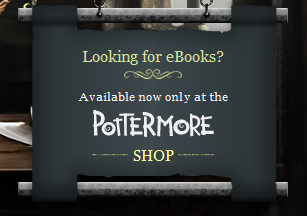 Okay, we know. Before you blast us for referring to Rowling as a digital pioneer, we’re aware that Trent Reznor did the same thing with his music and that many artists have followed suit. But you have to give Rowling credit here, this is a bold move – no matter how much money she had to invest.

Of course only time will tell if Pottermore.com is a success on the digital front, but it’s hardly realistic to predict a horrible flop- Harry Potter is incredibly famous on international levels.

The idea that someone can fully benefit from their own creative work is finally starting to gain some weight in the world of business. It’s not the first time this has ever happened, and plenty of other creative artists have earned the full benefit of their own work without others interfering in the revenue stream. But it’s certainly evident that this event this will mark a turning point in, at the very least, the world of publication and print.

Most publishers are likely condemning a world where artists are able to retain their creative rights and prosper from them. We, on other hand, are proud this is happening- it’s about time.

All images were taken directly from the Pottermore.com website and have not been altered in any way. All opinions expressed herein, implied or directly stated, do not reflect those of related parties (J.K. Rowling, Pottermore, Mark Coker,  or Warner Bros.).

Readers may also be interested in viewing our comparison of the Kindle Fire and Nook Tablet eBook readers.