Windows 8 will run on all tablet PCs, notebooks, netbooks and of course more conventional desktop machines. But with Windows 8, Microsoft developers are aiming to create a seamless experience across all devices.

“Our aim with ‘Windows 8’ is to make the user experience a natural extension of the device, from the time you turn on your PC through how you interact with the applications you know and love. This represents a fundamental shift in Windows design that we haven’t attempted since the days of Windows 95, presenting huge opportunities for our hardware partners to innovate with new PC designs.”

So basically there will be a single user interface for each version of Windows 8 that will look, function, and offer all the same features no matter what device is running it. 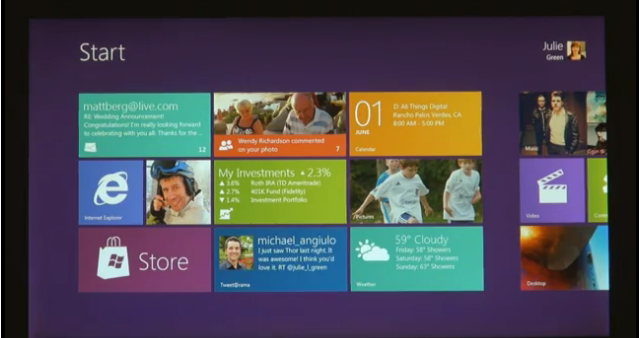 The Windows 8 preview was debuted at the D9 conference in California and was also further elaborated at Computex, 2011 in Taipei, Taiwan.

The new interface finally provides an explanation for why Microsoft never offered Windows 7 in the form of a tablet experience. Windows 7 offered a great PC experience, but it was never optimized for touch-screen devices.

Windows 8 will now feature full support for tablet devices with a fully updated user interface and tile based menu system. Of course it will also support more traditional PC platforms including but not limited to desktops, notebooks, and netbook machines.

Windows 8 Preview of Features and Innovations

The Microsoft development team also unveiled additional information about Windows 8 to the public, but they did not provide an exhaustive example of the new operating system. While we don’t exactly know every detail about Windows 8, here’s the breakdown of what we do know:

-Windows 8 will provide a streamlined touch interface for tablets and a traditional control scheme for a mouse and keyboard.

-The new user interface will be completely touch optimized for use with touchscreen devices that support gesture and multi-touch features.

-Windows 8 will ship with Internet Explorer 10 as the default browser.

-Windows 8 will use tiled menus similar to the Windows Phone 7 interface, but they will be more advanced and accessible.

-Windows 8 will run older software that is compatible with all previous versions of Windows (you can breathe a sigh of relief).

-Windows 8 will offer multi-tasking opportunities just as previous versions have in the past.

-Windows 8 will scale to the operating device’s proper screen resolution; which means it will scale automatically to tablets, netbooks and higher end desktops.

-Applications will be launched from a tile based start menu instead of the traditional icon list based menu.

-Web based applications and programs will use HTML5 and Javascript for better overall performance.

It is also very important to note that “Windows 8” is currently just a codename for the new operating system, which means the name can be changed at any time. Remember that Windows Vista was previously codenamed the “Mojave Experiment“, while Windows 7 on the other hand remained “Windows 7” during the entire development period. The operating system’s development name doesn’t necessarily reflect the official product release name.

Don’t just take our word for it, check out all the awesome new innovations and features of Windows 8, in the “Building Windows 8 Preview“.

We have more info on Windows 8 and the features it should have! Click here: Windows 8 Features