In case of mobile apps, tablet owners and smart phone users are becoming less inconsistent as far as their choice of apps is concerned. It has been seen that iPhone holders are more faithful than Android phone owners.

Here are some popular apps that fetched rave reviews all over the world and were most used in the year 2012.

The Google Suite
It easily remained as the most used application in the year 2012. Mostly, I used my iPhone last year, but even while was on Android, it was clear that Google’s suite of applications are among the most-used applications on any device. I am hugely thankful to Google for offering the facility of running a complete line of online business applications free of cost or at a trial period of 30 days. Even Google’s paid services come at a cheap cost.

What I found most appealing is that Gmail’s notifications via the iOS app, which proved to be extremely useful to my business. Google Apps for Education is yet another tool that is available free of cost.

Google Maps
Google Maps is one of the most outstanding applications active today. Earlier, in the time between the introduction of iOS6 and the advent of Google Maps, Waze’s maps app had made its place on my home screen, that had its very own community of drivers eyeing for traffic snarls, accidents, and speed traps.

The Apple Maps presented me with an opportunity to re-engage with Waze but I am not very sure about its longevity in 2013, since Google has returned now.

Google Calendars
Google applications are in tune with the iPhone and the OSX Mail application over IMAP. Thanks to Google Calendars, I am able to maintain a track of my company’s milestones and schedules over a shared calendar. 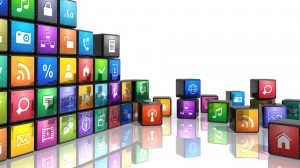 Instagram
It is yet another most downloaded app of 2012. I enjoyed creating cool-looking pics with this app using its creative features and adding effects. Sharing on Instagram has been an enjoyable experience for me throughout the year.

Personally, I rely on Dropbox for my own work purposes. Since I receive a pack of files from my business clients, it is a natural choice for me as I have a transition from .zip files and e-mail attachments to Dropbox.

Flock
I made optimum use of this application as it facilitates sharing photos in private groups. This feature has the advantage of organizing time and location. In comparison to its Android version, its iOS version is a lot attractive in terms of design, flow, user interface, and feature set. Also, this application keeps things pretty simple and straightforward.

Poshmark and ThredUP
Fab may be credited with occupying 90 % online shopping space but I still prefer to use ThredUP for my shopping needs. Whenever I desire to buy kid’s clothes, I go for ThredUP.