The first Android 3.0 (Honeycomb) internet tablet from Motorola, the Motorola Xoom tablet, will be released on March 27th, 2011 with a retail price tag of $599. The first retailers to sell the tablet include Amazon, Best Buy, Costco, Radioshack, Sam’s Club, Staples, Walmart and of course Verizon.

The Motorola Xoom tablet features a 32GB total storage capacity combined with full WiFi and 3G wireless support all running on the latest release of the aforementioned Android 3.0 OS. If you didn’t already know, the Xoom is a 10.1″ internet tablet designed with a full HD widescreen display and is in the same market as Apple’s iPad or iPad 2. 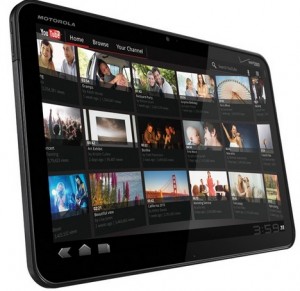 The Motorola Xoom tablet is powered by an NVIDIA Tegra 2 1GHz dual core processor, combined with 1GB DDR2 RAM. It features a 10.1″ LCD touch screen display which operates at a native 1200×800 HD resolution and is outfitted with multi-touch gesture support (pinch to zoom). The Xoom also boasts an extended battery life of up to 10 hours HD video playback, 14 days in standby time, 10 hours if browsing over Wi-Fi, 9 hours if browsing over 3G, and up to 3 days MP3 audio playback. Which if the battery indeed lasts as long as Motorola claims, is an incredible feat if you know how batteries fare with touch screen devices; if you don’t chances are that you’ve probably been living under a rock.

As an added bonus the Xoom additionally includes Bluetooth version 2.1 wireless synchronization with integration support for all Bluetooth enabled devices.

The Xoom is (obviously) an incredibly powerful internet tablet, which Motorola intends to pit against Apple’s arsenal. After reading over the Xoom specifications and hardware you can see that this tablet is no joke and may just give Apple a run for their money. The front and rear cameras, Adobe Flash and Android 3.0 support will be what sets the Xoom apart completely from Apple’s fan-fare.