Everyone wants to run their games on maximum settings, but as games become increasingly more beautiful they also become exponentially more demanding and such desires become difficult to maintain. Framerates suffer considerably when increasing settings to levels higher than your hardware can support, and we’re going to go out on a limb here and say that like us, you probably don’t upgrade your graphics card every few months.

For a measly $1,000 (yes, that was sarcasm), you can get your hands on the fastest, and most powerful graphics card available, the Nvidia GeForce GTX 690.

Nvidia is set to unleash the beast, the GeForce GTX 690, into the wild on May 3.

The GeForce GTX 690 replaces the previous model GTX 680 (which actually wasn’t released too long ago), and runs at higher framerate speeds that are equal to what Nvidia claims to be double the amount of two GTX 680’s running in dual SLI mode. Holy crap, that’s a lot of power! 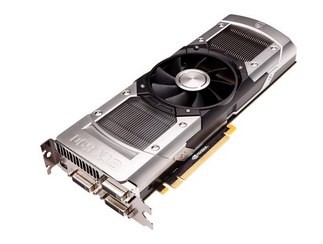 The Nvidia GeForce GTX 690 is powered by two 28nM Kepler GPUs and includes a total of 3,072 Cuda cores. If you have no clue what that means, trust us when we say this baby is powerful!

The exterior of the GeForce GTX 690 doesn’t look too shoddy, in fact, it’s downright attractive. The body exterior is designed for extreme cooling and is comprised of trivalent chromium-plated aluminum. The cooling fan includes thixomolded magnesium alloy casing which eliminates vibrations and excess noise during movement. In addition, the GeForce GTX 690 also includes a dual vapor chamber and a center-mounted fan which has been strategically positioned in order to cool the entire surface of the card. If you’re one of those folks who doesn’t keep up with all the technical terms of the body materials, we’ll enlighten you further – the GeForce GTX 690 will run much cooler and about 4dB quieter than a pair of GTX 680s.

The NVIDIA GeForce GTX 690, Available May 3

We’ll be looking forward to using this bad boy someday, when our budget allows for the not-so-budget-friendly price. For more information check out the official press release below.

Powered by dual Kepler™ architecture-based GeForce GPUs, the GTX 690 is meticulously designed — inside and out — to deliver the most refined, elegant and smooth PC gaming experience possible.

The surprise announcement was made by NVIDIA CEO and co-founder Jen-Hsun Huang during his keynote address at the NVIDIA Game Festival in Shanghai, which is being attended by more than 6,000 gamers from across China.

Engineered to reach a new threshold in gaming performance, the GTX 690 also looks the part. Its array of innovative technologies is complemented by sleek materials that contribute to the exotic design of the card, including:

An exterior frame made from trivalent chromium-plated aluminum, providing excellent strength and durability

A fan housing made from a thixomolded magnesium alloy, which offers excellent heat dissipation and vibration dampening

The GTX 690 is powered by a total of 3,072 NVIDIA CUDA® cores, all working to deliver awesome gaming performance for ultimate gaming setups. Designed for the discriminating gamer and ultra-high-resolution, multimonitor NVIDIA Surround™ configurations, the GTX 690 delivers close to double the frame rates of the closest single GPU product, the GTX 680. Plus, it is more power efficient and quieter when compared to systems equipped with two GTX 680 cards2 running in NVIDIA SLI® configuration.

The NVIDIA GeForce GTX 690 GPU will be available in limited quantities starting May 3, 2012, with wider availability by May 7, 2012 from NVIDIA’s add-in card partners, including ASUS, EVGA, Gainward, Galaxy, Gigabyte, Inno3D, MSI, Palit and Zotac. Expected pricing is $999.

About NVIDIA
NVIDIA NASDAQ: NVDA) awakened the world to computer graphics when it invented the GPU in 1999. Today, its processors power a broad range of products from smartphones to supercomputers. NVIDIA’s mobile processors are used in cell phones, tablets and auto infotainment systems. PC gamers rely on GPUs to enjoy spectacularly immersive worlds. Professionals use them to create 3D graphics and visual effects in movies and to design everything from golf clubs to jumbo jets. And researchers utilize GPUs to advance the frontiers of science with high performance computing. The company has more than 4,500 patents issued, allowed or filed, including ones covering ideas essential to modern computing. For more information, see www.nvidia.com.

Certain statements in this press release including, but not limited to statements as to: the availability GeForce GTX 690 GPUs; and the effects of the company’s patents on modern computing are forward-looking statements that are subject to risks and uncertainties that could cause results to be materially different than expectations. Important factors that could cause actual results to differ materially include: global economic conditions; our reliance on third parties to manufacture, assemble, package and test our products; the impact of technological development and competition; development of new products and technologies or enhancements to our existing product and technologies; market acceptance of our products or our partners products; design, manufacturing or software defects; changes in consumer preferences or demands; changes in industry standards and interfaces; unexpected loss of performance of our products or technologies when integrated into systems; as well as other factors detailed from time to time in the reports NVIDIA files with the Securities and Exchange Commission, or SEC, including its Form 10-K for the fiscal period ended January 29, 2012. Copies of reports filed with the SEC are posted on the company’s website and are available from NVIDIA without charge. These forward-looking statements are not guarantees of future performance and speak only as of the date hereof, and, except as required by law, NVIDIA disclaims any obligation to update these forward-looking statements to reflect future events or circumstances.

© 2012 NVIDIA Corporation. All rights reserved. NVIDIA, the NVIDIA logo, CUDA, GeForce, Kepler, and Surround are trademarks and/or registered trademarks of NVIDIA Corporation in the U.S. and other countries. Other company and product names may be trademarks of the respective companies with which they are associated. Features, pricing, availability, and specifications are subject to change without notice.

Indie Game of the Week – A Valley Without Wind