In an unexpected and surprising move, Apple unlived the Apple OS X Mountain Lion last week, and fans around the world were left awestruck as the new OS promises to bring over a 100 new features, including those features that are present in the iOS, like the messaging app and Twitter integration, and AirPlay Mirroring.

Apple released OS X Lion just seven months ago, selling over 19 million copies worldwide. It has now surprised all its fans by unveiling the next OS for the Mac, combining it with iOS to provide more features and flexibility.

Merging iOS with OS X is perhaps a brilliant move from Apple and no doubt this is going to simply amaze the Mac users. Currently, Apple has released the Developer Preview of the OS X Mountain Lion, enabling developers to discover all the features and eventually develop apps and distribute great Mac apps.

In addition to all this, OS X Mountain Lion will offer deep integration with iCloud, which will enable the system to automatically configure services like, Mail, and FaceTime, while the iCloud Documents will automatically sync documents across devices. 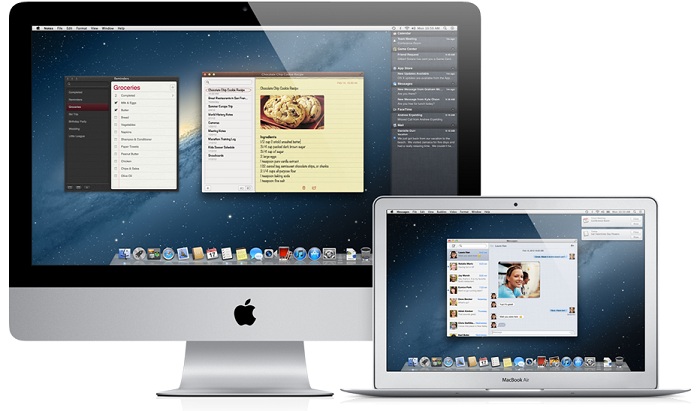 Also, Apple has officially renames Mac OS X to just OS X, dropping the name ‘Mac’. This means that Apple’s desktop operating system is now simply called as OS X. This is because Apple plans to refer ‘Mac’ to hardware products, while OS X refers to the software.

This is first developer preview of OS X 10.8 Mountain Lion, and the OS will be released to the public in late summer. Here’s an overview and the new features that OS X Mountain Lion boasts about.

Mountain Lion is Apple’s first OS X release after the launch of iCloud in October 2011. iCloud is Apple’s cloud-based sync and store service, which currently has over 100 million accounts. Having laced into iOS 5, iCloud is now getting a deeper integration into OS X Mountain Lion.

The initial registration process is to be done, similar to how you set up the account with your iPhone, iPad or iPod Touch. You will be presented with a login screen when you first install the OS, and the system will automatically set up Mail, iCloud, Contacts, Calendars, Messages, FaceTime, Notes, Reminders, Game Center, Mac App Store, Documents & Data, and Bookmarks.

Once done, you will have to manually perform some operation with the iCloud setup after which the system will automatically sync your contact, calendars and bookmarks for you.

OS X 10.8 Mountain Lion also includes Documents in the iCloud, which will be opened at the document library, and listed chronologically by last edit date. That way, you can store and access documents and files directly from iCloud. Users are also given an option to create a new folder for iCloud documents using an interface that is much similar to the iOS Apps folders UI.

Notes is an iOS app that has been integrated into the OS X 10.8, which is very much similar and looks almost exactly like the iPad Notes app. Notes has always been elegant in its simplicity and easy to use. Every note added can simply be a simple text, or a completely formatted content with change of fonts, with bullets and numbering. You can also include images or photos by simply dragging to Notes. 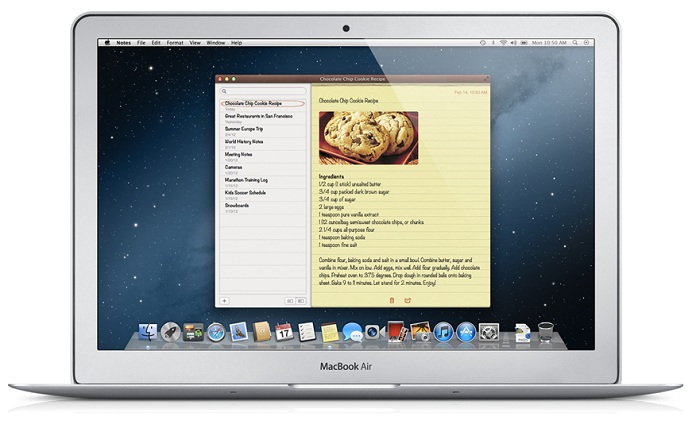 One thing that I like about the app is that you can keep a note opened even after close the main Notes app. The note will be opened in a new window, and you can set individual note windows to always stay on top. However, this feature will be disabled in Mission Control and couldn’t be moved on top of full screen apps or other Spaces.

Notes sync with iCloud, and can also be synchronized with supported services like, Gmail, Yahoo, and others. Additionally, you can even drag and drop notes into the Reminders app, and create to-do lists from them.

Messages in OS X Mountain Lion has been replaced with the iChat on Mac. With Messages, Mac users can now easily share and exchange photos, text, and video messages with the 100 million iOS 5 iMessage users. Video chat can be done using FaceTime video calls, which is however a separate app, but Messages can launch the app and start a video chat without any additional tasks or steps.

Messages has got a new user interface with a mixture of IM, text messaging, and message history search that blends into something entirely different. It is simple to start a conversation and can be easily carried over to any of the iOS device. It also supports dropping of photos and videos right into a conversation without any efforts. 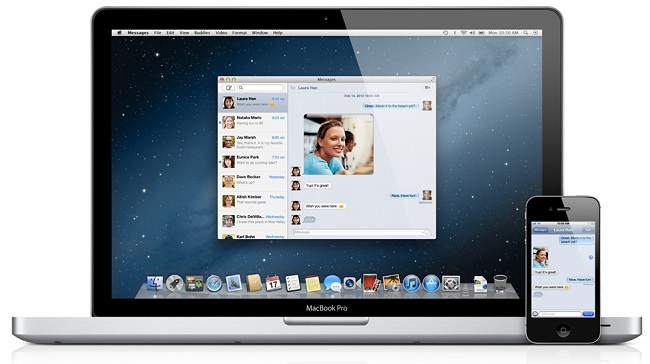 Users can also transfer up to 100MB of file size with read-receipts. All conversations, individual or group, are encrypted in Message. Users can try out Messages for free at the moment. Apple is offering a free beta for Lion users, which will expire when OS X Mountain Lion is released for public use.

According to stats, so far, there have been around 26 billion messages sent using the app, and the figure is expected to soar higher once the OS X Mountain Lion is release to the public.

Notifications is yet another major feature that has been migrated from iOS to OS X. Notifications is quite similar to Growl app, as notifications are displayed on the upper right-hand corner. You can seven choose to if an app displays a banner, an alert that shows up in the middle of the screen, a badge icon, or all three.

These notifications will automatically slide away after five seconds, and a new blue icon lights up on the right side of the menu bar. Clicking this icon will slide the OS X desktop to the left and opens up the Notification Center, which looks similar to iOS 5.

According to John Gruber, only apps acquired from the Mac App Store can send events to Notifications. You can, however, configure the app to only alter you if you receive an email from a friend or colleague who has been marked as a VIP, or have any missed FaceTime calls, or friend requests, or game invitations in Game Center. That way, you can avoid the notification alter if you find them annoying. There’s also a new Notifications API allowing third-party apps and services to hook into the Notifications Center as well, even if the app itself isn’t running.

The Notification Center can also be accessed with a two finger swipe to the left from the right hand side of the trackpad. Swiping toward the right with two fingers will close the panel.

With the iCloud integration, entries in the Reminders will be automatically synced across all devices, but can also be synced with supported services like Google Calendar and Yahoo Calendar. Similar to the iPhone and iPad app, Reminders in OS X 10.8 supports creating lists and checkboxes, and due dates with alerts. 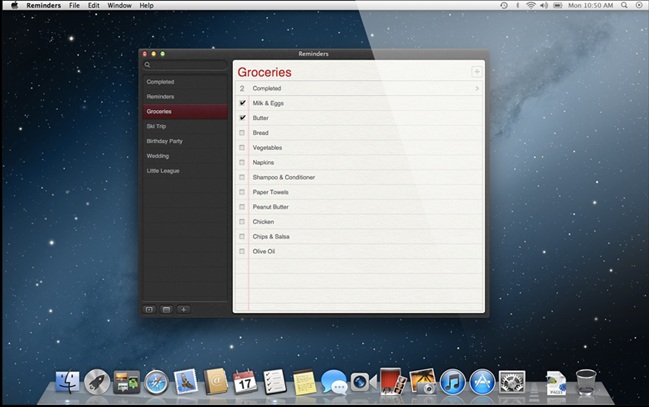 However, Reminders in OS X 10.8 does not support location-based reminder unlike on the iPhone and iPad, but other functionalities like alerts, priorities, and due dates should do the needful.

Once you login to Twitter, you can easily share content across Safari, Preview, Photo Booth and Quick Look. It also has the character count which makes sure that you’ve tweet is under 140 characters. URLs will be automatically shortened and an optional city-level location can also be added. You can also sync pictures of your contacts your Twitter list.

One major new addition to OS X Mountain Lion is the Gatekeeper feature. Gatekeeper is Apple’s new security system for OS X, that is basically used to check if a app or a software hasn’t been flagged as malware.

Mac Developer Program members can get a unique Developed ID, a identification code for each developer. When a user attempts to download an app from the Mac App Store using the Developer ID, the Gatekeeper then comes in use, by checking if the app is flagged as a malware or not. If not, the app will be downloaded and the user can install it, however, if it has been flagged as malware, then the app will be automatically discarded from downloading.

In other words, developers will now have the ability to sign their apps, and Mountain Lion will only install only those apps that are signed and apps from the Mac App Store.

Developers can get the unique Developer ID from their existing subscription fees for the Mac Developer Program. According to Apple, signing a new application is easy with just a few clicks. All thanks to its integrated Xcode signature tool.

According to Apple, the objective of Gatekeeper is to protect Mac users from installing malware apps from uncertified and pirated app stores. You can however run unsigned apps by changing the global setting to allow apps from anywhere. 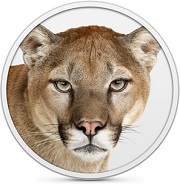 “With all-new features inspired by iPad, the Mac just keeps getting better and better.” This is what the headline reads on the Apple’s OS X Mountain Lion webpage, and certainly it does have many new features included from iOS.

The OS X Mountain Lion developer preview is available today. However, not all the features will be included in it. Users will have to wait until late summer when the OS will be launched for public use. Meantime, let us know your views and opinions about the new OS X Mountain Lion by adding them in the comments section below.