What if I told you that you could build an iPhone application using an Adobe Flash development environment?

You would probably say, you’re nuts.

It’s no secret that Adobe and Apple mix like oil and water; they simply don’t go well together. Until now.

Introducing the Pieceable Viewer, a recently launched program, that allows developers to create an iOS testing environment for use on the web executed through Adobe Flash. Basically the program addresses the issue of users not being able to test out applications before they decide to purchase them.

The Pieceable Viewer allows developers to run an iOS application (iPhone application) using an emulator based method, which can then be posted or integrated into a private website or social media profile for advertising purposes.

With the Pieceable Viewer any iOS or iPhone application can natively run on a computer using Adobe Flash, however it is navigated using a mouse (as opposed to touch, motion, and gesture controls). While this may not give a completely accurate portrayal of a true iPhone application (no touch screen), it does at least allow potential users to try out the main features and decide if it’s worth their hard earned money or not.

Developers can also use the Pieceable Viewer to test out their product or application, by sending out links to Beta testers. When navigating to the link to test out the application users aren’t required to enter a device ID or form of serial code. Testers also aren’t required to download extensive development software or special environment files; thanks to flash the direct URL is all they need. 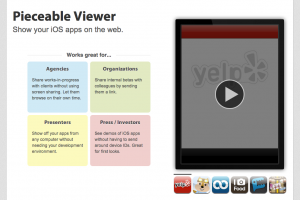 Thats it, quite simple really.

According the official product site the code for a hosted iPhone application resembles the following:

As you can see, once the file is uploaded there isn’t much more to it. Other than to hand out the link to trusted parties for testing.

The site also clearly states that iPad applications are not currently supported but will be eventually in a later program update.

UIKit applications work best in the Pieceable Viewer program; OpenGL and MapView based content does run but isn’t rendered properly which means it could be buggy. Greater support for these other types of applications will also be added in a later program update.

The Pieceable Viewer is offered with two different pricing plans (and a trial plan) which is dependent upon the amount of users testing an application simultaneously and of course how many total apps are uploaded.

The plans are as follows:

The pricing is competitive when compared to the average costs of hosting and testing out applications the more traditional way. Pieceable Viewer also offers a very simple and easily accessed method to get your application ready for the market.

If you’re an iOS developer or an aspiring iPhone Application designer then Pieceable Viewer is something you’ll definitely want to check out.

As a side note, if the platform performs well overall it will be interesting to see how Apple reacts to it’s iOS being directly integrated with Adobe Flash.