Pulse, one of the popular mobile and web applications used today has so far depended on conventional sources to collect news. However, popularity of the app has made the makers venture into gathering latest news bits from feeds of social networking sites like Flickr, Intagram, Facebook, Tumblr, YouTube and the like. All these news pieces added to the app were highly authenticated and only included after thorough scrutiny.

How social feeds may impact Pulse?
Although Pulse is already offering few cumulative feeds from social sites like top photos from Instagram, top videos from YouTube and most popular reads from Readability; the personal social feeds are something that is completely new for the application users. Pulse is well known for its stylish and elegant way to of featuring news that is collected from distinct sources. It is anticipated that with the introduction of authenticated personal feeds from social sites, the application will get a slight makeover.

Makers of the app said, “Pulse’s main goal was to offer a single page to its users where they get all the news feeds rather than accessing multiple platforms in search of news. Of late, we observed that people are more inclined towards social networking sites to catch hold of current and interesting news pieces. Hence we introduced the ‘new’ feature in our app, removing the requirement of users to go to these sites.”

However, even after launching the social feeds, Pulse is not at all allowing scope for any comments and likes on these comprehensive social feeds. This allowance may make the app more social and the application designers might do good by allowing user comments in the future.

How the social feed feature works?
To see personal social feeds, application users need to log into their individual social networking accounts only once. Post logging-in, whenever they access Pulse, they get to see their personal feeds anytime. Pulse’s catalog option can be used to add social feeds. 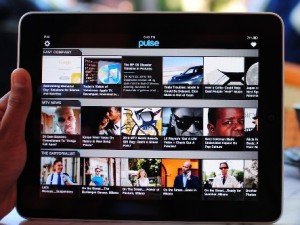 Currently, designers are redesigning the ‘Social’ category of Pulse to make these social feed easier to access for users.
Almost all new feeds are heavily cluttered with videos and images and thus, the team at Pulse has ensured that image and video viewing to be a rich experience for the users. Redesigning of the Pulse app would allow users to grab HD images and uncut videos all the time.

Twitter not touted up with Pulse?
Yes, despite being one of the popular social sites, Twitter and Pulse are not integrated yet. Pulse app maker has given two reasons for the same. One is the heavy text of the Twitter feeds that makes tweets incompatible with Pulse. Though the Pulse team can cumulate the feed text from Twitter and get it displayed easily on- screen, it is being said that it is not suitable for quality reasons. The second reason in this context remains the ever-changing API of Twitter that is not expected to go down well with Pulse.