Pretty soon, Netflix won’t be the only player in town (no pun intended). Redbox is going to take on the streaming giant with a new service called Redbox Instant, and the kicker, it actually looks incredibly promising.

We don’t have an exact release date yet, but Redbox has quoted an early 2013 release. Which means the service will start rolling out soon to select areas for testing. Redbox recently announced more detailed information about the subscription plans and pricing in a press release.

Redbox Instant will cost $8 a month for unlimited streaming options but will also allow for up to four free one-night disc rentals from any participating Redbox kiosk. For an extra dollar (so $9 a month), you can swap out those classic DVD rentals to Blu-ray. 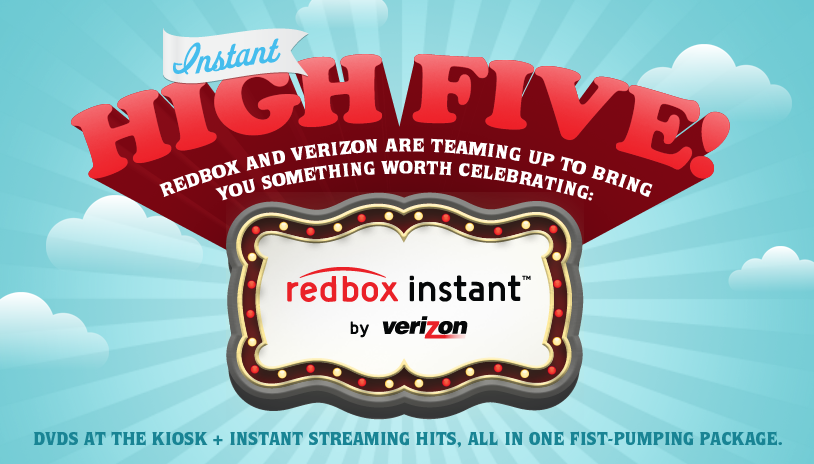 From the get go it seems as if Redbox Instant will undermine Netflix, especially considering the latter service offers only streaming options for the same $8 price. While four free discs from a Redbox kiosk a month may not be much, it’s still more than what Netflix offers.

Of course, the success of Redbox Instant will almost entirely depend on the content offered through their streaming service. If the catalog is lackluster, you can guarantee that customers won’t be willing to make the switch. Then again, sometimes it’s seemingly impossible to find something good to watch on Netflix.

What Will Redbox Instant Offer to Subscribers?

In case you weren’t already aware, Redbox Instant will be offered by Verizon, in a direct agreement with EPIX. Movies from Lionsgate, NBCUniversal, Paramount Pictures, Relativity and Warner Bros. Home Entertainment will be available for purchase or rental (VOD). 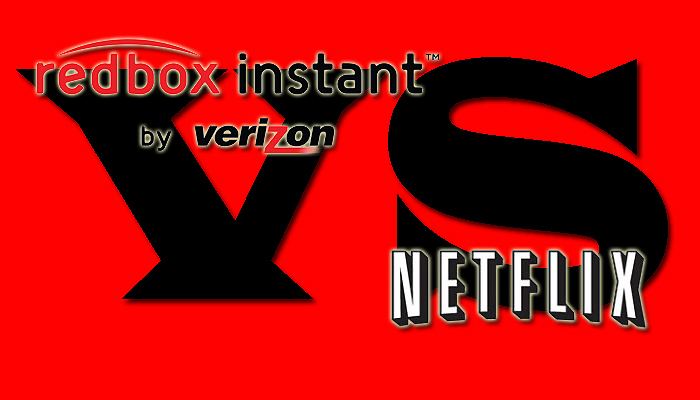 In addition, the service will be available on several different platforms including iOS, Android, Samsung Blu-ray Players and SmartTVS (with SmartHub), LG SmartTV and related Blu-ray players, and GoogleTV.

Some time ago, information about a Redbox Instant Xbox 360 player was leaked to the public which leads us to believe that the console will also see a compatible app in the near future. It only makes sense considering the Xbox 360 console is one of the most widely used home entertainment devices around. Although, hopefully Redbox and Verizon know that it’s not the only console used for home entertainment. We’d like to see PS3 and Wii based support, as well.

Nevertheless, the service is already looking extremely promising, and if Redbox and Verizon can produce a strong content catalog then customers will indubitably change. The allure of those free DVDs and Blu-ray rentals, is just too much to pass up, especially considering Redbox kiosks always have some pretty good films available.

The service will begin rolling out later this month, but it will be invitation only. If you want to enter your name in the queue to try out the service before it’s available to everyone visit this signup page. 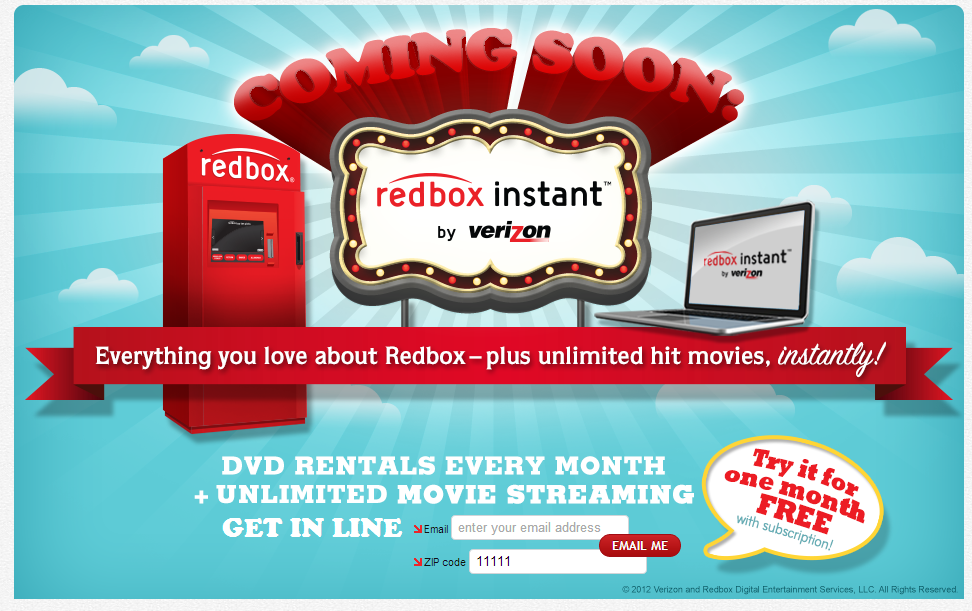 Personally, I’m intrigued by this news. It will be interesting to see how this all play outs. Will Netflix fire back with a new type of subscription plan to combat the new Redbox and Verizon service, or will they simply wait it out? Netflix has been around much longer, and thus they have a much bigger selection of content. They know the market and they know how media streaming works. While Verizon is no stranger to media streaming, it’s questionable whether or not they possess the necessary tact to pull this off.

I’m also going out on a limb here to say that the Redbox Instant catalog will not be as robust as what is offered by Netflix. This could be good and bad, depending on the type of content offered. Sometimes, if you give consumers too many choices it can be detrimental. At the same time, if you don’t provide enough compelling content, then you’re going to lose subscribers.

Redbox and Verizon are in a very tricky situation, at least until they can prove themselves. I’m hoping the service is phenomenal, because I’m tired of Netflix and it will be nice to try something new. You, on the other hand, may feel entirely different.

By all means, share your thoughts in the comments below. 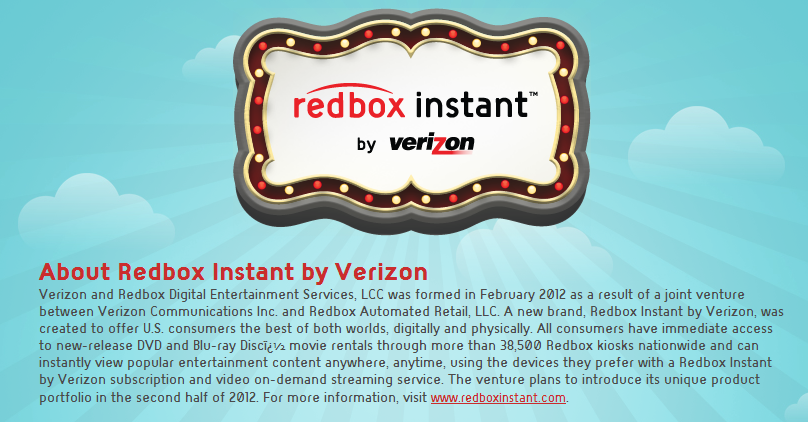 We’ve included the entire PR text for your perusal below. If you’d like to receive more detailed information about the service in the future, be sure to visit the official Redbox Instant website to enter your email address.

The press release pretty much sums up everything I already said above, so if you’re not one for reading business lingo you can skip it. It’s always good to have a different perspective though.

New York, NY (December 12, 2012) – Redbox Instant by Verizon, a joint venture between two market leaders, Redbox, a subsidiary of Coinstar, Inc. (Nasdaq: CSTR), and Verizon Communications Inc. (NYSE: VZ), unveiled further details of its soon-to-launch service and announced agreements with Hollywood studios and device manufacturers that will bring thousands of popular movies to consumers at home and on the go.

Later this month, the Redbox Instant by Verizon beta product will launch to consumers. Priced at $8.00 per month, Redbox Instant by Verizon offers a high value subscription package that combines unlimited streaming of thousands of popular movies, including titles from premium network EPIX, with four one-night credits per month for the latest movie releases on DVD at Redbox kiosks. For $1 more, or $9.00 per month, customers can opt to redeem their four credits for rentals on Blu-ray Disc at the kiosk.

By combining both disc and digital movie formats, Redbox Instant by Verizon subscriptions offer consumers access to Hollywood’s newest releases, as well as a rich catalog of popular movies, all for a great price. Customers can also use Redbox Instant by Verizon without a subscription and select new releases available for purchase or rental, or simply reserve for pick up at their local Redbox kiosk location, giving movie-lovers more choice and flexibility in how they watch their favorite films.

“We are building a compelling entertainment choice through our ability to support both physical and digital distribution of movies that people love, made possible by the depth of relationships we’ve established with top Hollywood studios and distribution partners,” said Shawn Strickland, CEO, Redbox Instant by Verizon.

Through the agreement with EPIX, Redbox Instant by Verizon’s subscription customers will be able to instantly stream new releases such as Mission Impossible: Ghost Protocol and The Hunger Games from EPIX’s studio partners, Viacom’s Paramount Pictures (Nasdaq: VIA and VIA.B), Lionsgate (NYSE: LGF), and MGM 90 days after they premiere in the traditional premium window.

“Redbox Instant by Verizon will be an exciting new service for consumers in the digital entertainment marketplace and we are thrilled to be their partner, providing our movies from some of the world’s leading studios,” said Mark Greenberg, president and CEO of EPIX. “We have a long and successful relationship with Verizon FiOS, which was our first distribution partner at the launch of EPIX, and we are excited to build on that relationship with Redbox Instant. We are confident that the movies we have will be a popular and important part of the success of this new service.”

Movie content on Redbox Instant by Verizon will be bolstered by electronic sell-through (EST) and video-on-demand (VOD) rental agreements with major studios. New releases from Lionsgate, NBCUniversal, Paramount Pictures, Relativity and Sony Pictures Home Entertainment will be available in EST and VOD formats and will allow Redbox Instant by Verizon to support and provide multi-screen access to movies.

At launch, Redbox Instant by Verizon will be offered via the web, as well as through home entertainment, tablet and mobile devices, including iOS, Android, Samsung Blu-ray Players and TVs with SmartHub, LG Smart TV and Blu-ray Players, and Google TV. More devices will be announced in the coming months.

“Samsung’s connected customers are very hungry for new services that provide the best movies on multiple devices,” said Eric Anderson, Vice President of Content and Product Solutions, Samsung Electronics America, Inc. “Redbox Instant by Verizon provides our customers with the latest in Hollywood entertainment choice, control and discovery.”
Redbox’s 10 years of offering customers the newest releases at great value, coupled with Verizon’s leadership in On-Demand and Digital Distribution of movies, has set the foundation for how Redbox Instant by Verizon will deliver content and value to the consumer. Redbox Instant by Verizon is working with movie studios to secure the freshest content selection, and intends to tap heavily into pop culture events and social conversations to help influence and surface relevant movie titles to consumers.

Starting later this month, Redbox Instant by Verizon will open to public beta and consumers will be invited to explore the service and enjoy their first subscription month free. Thousands of movie fans have already signed up at RedboxInstant.com to be among the first to try the service and experience a fun, simple way to discover the best Hollywood entertainment.

About Redbox Instant by Verizon
Verizon and Redbox Digital Entertainment Services, LLC, was formed in February 2012 as a result of a joint venture between Verizon Communications Inc. and Redbox Automated Retail, LLC. A new brand, Redbox Instant by Verizon was created to offer U.S. consumers the best of both digital and physical worlds. All consumers have immediate access to new-release DVD and Blu-ray Disc movie rentals through more than 42,400 Redbox kiosks nationwide and can instantly view popular entertainment content anywhere, anytime, using the devices they prefer with a Redbox Instant by Verizon subscription and video on-demand streaming service. The service will be available to the public by the end of 2012. For more information, visit www.redboxinstant.com.