The first two parts looked at how the Angry Birds game has come to take the gaming world by storm, whether it is iOS, Chrome, Firefox or our beloved social networking sites like Facebook or Google+. Another mobile platform that the game has come to dominate is Android. This particular platform is probably one of the most important in the long term, because already Android dominates almost half the market for smartphones, and assuming that it makes strides in the tablet PC segment, then its market power is bound to increase, meaning the apps that are featured in the Android market are sure to get more exposure in the long term.

One of the problems with working for Android is that developers must take into account the Android Operating System and the capabilities of an average Android phone. However, in general, Angry Birds functions rather well across a variety Android devices across the spectrum including relatively low-end devices such as the HTC Wildfire S to more high-end devices such as the Samsung Galaxy S2.  Naturally, the quality of the graphics and the smoothness of the gameplay will be dependent of the hardware capabilities of the particular Android phone. So better phones equal better performance. The current generation of the game (all three versions of it) requires Android 1.6 or higher and are free to download from the Android Market.

The classic Angry Birds Android version of the game features a 4.6 rating and has already boasts almost a million downloads.  The game features 285 levels that get progressively more difficult. 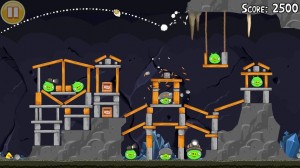 The current version of the game (v 1.6.3) also features a new “Mine and Dine” underground episode, which as the name suggests, places the action in a series of underground caverns, and users will have to make the best use of the geology to pass the levels the eggs and other bonuses like rare gems.

Angry Birds Rio comes loaded with a 4.7 rating and like the classic version, it also features around a million downloads. The game is loosely incorporated into the plot of the wildly popular animated film Rio. 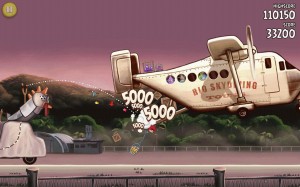 The current version of the game (V 1.3.2) features five episodes with 150 levels. The game also features a variety of hidden fruits and other achievements.  Perhaps the coolest thing about this version is the superb boss fight.

In terms of visuals, it’s probably Angry Birds Seasons that really stands out.  The game features a 4.5 rating and like the other versions, around a million downloads. It is also my personal favorite. 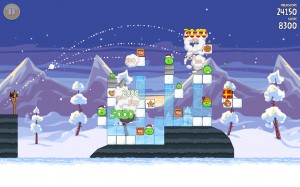 In addition to the official Angry Birds Android versions, there are also a variety of support apps that are aimed at enhancing the Angry Birds experience.

One such app is the Angry Birds Unlock All Levels and as its very descriptive name suggests, the app will unlock all the levels in Angry Birds. It also adds 10,000 points per level. The app seems to be quite popular (3.8 rating and between 500,000 and 1,000,000 downloads) but keep in mind that app will only work on rooted devices and it will erase all your previous scores. 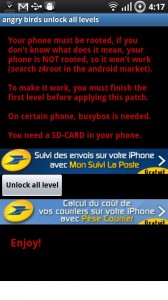 The Angry Aviary Lite : Angry Birds, on the other hand, is designed to make the Angry Birds experience more social by letting multiple users maintain gaming profiles on the same device. This is great for all those competitive gamers or those who have to constantly endure their phone being borrowed by others for the sole purpose of Angry Birds (parents, I’m referring to  you). This app also has an above-average rating (3.8) and quite an avid following but as it is there are quite a few bugs. 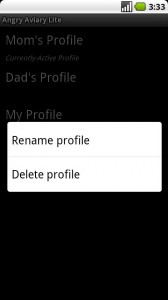 One of the coolest apps, however, is the Angry Birds Backup. This allows gamers to backup their saved files to the SD card or a DropBox account. This is great for all those who are prone to changing phones every now and then or those who want to be extra sure their hard-played gaming experience isn’t accidentally deleted. The app has a solid 4.5 rating but a rather low-adoption rate, so proceed with a healthy dose of skepticism if you plan on downloading this app. 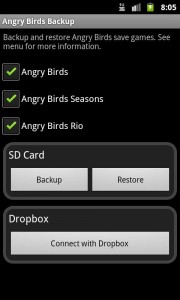 Playing different Angry Birds Android versions is absolutely thrilling and the fact that each version is somewhat unique, makes it all the more appealing. Hence, Angry Birds will continue to be one of the biggest gaming titles on the Android Platform. The only serious deficiency is the fact that the game may perform differently depending on the Android smartphone it is being played on and that is not the developer’s fault. Given the huge popularity of the platform, we can almost certainly expect more exclusive features or upgrades in the near future. If you haven’t already tried any of the Angry Birds Android versions, you are already missing out.