The original Samsung Galaxy Tab (7″) was one of the first mainstream Android tablets to hit the market. The Galaxy Tab was also the first tablet available through Verizon wireless, the service provider offering two year contract agreements (3G) to go along with the device.

The latest model features a larger 10″ capacitive touchscreen display and is powered by an Nvidia Tegra 2 (1GHz) dual-core processor and 1GB DDR2 installed RAM. The Galaxy Tab 10.1 is both lighter and slimmer (.34″ thick) in overall size than the Apple iPad 2; in fact it has the smallest rated structure out of all the current Android tablets on the market including the Motorola Xoom, and the Acer Iconia Tab A500. 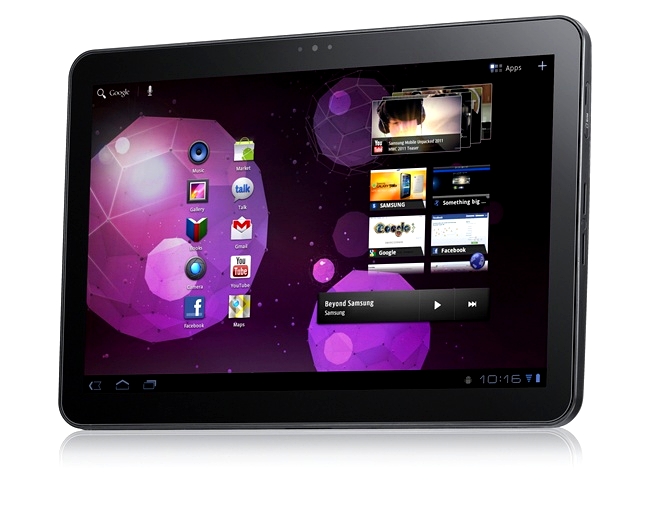 The Galaxy Tab 10.1 is outfitted with a slim glossy black bezel on the front of the device and a matte flat white finish on the back; the external body design was derived from its predecessor, the Galaxy Tab 7″. Of course that slim black bezel surrounds a 10.1″ widescreen “HD” WXGA TFT LED touchscreen display. It’s also worth noting that the Galaxy Tab 10.1 display supports a 1280 x 800 maximum resolution.

The Samsung Galaxy Tab 10.1 is one of the few Android tablets that comes outfitted with the Android Honeycomb (3.1) operating system, with the only other worthy competitors that also include Honeycomb being the Asus Transformer TF101 and the Acer Iconia Tab A500.

The LED technology used for the Samsung Galaxy Tab 10.1 and the external casing resembles Samsung’s high-end LED television line. In fact, while holding the Galaxy Tab 10.1 it looks like the user is simply holding a portable, and thinner television. This stylized approach to the exterior of the tablet gives it a very sexy and sleek design. 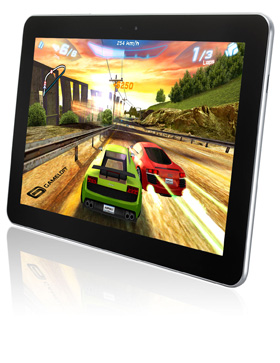 The Samsung Galaxy Tab 10.1 is available in both wi-fi only and 3G enabled models so consumers have the option to purchase the device with or without a contract, depending on personal preferences. Of course a 3G enabled model can be used anywhere thanks to the integrated 3G wireless radio, provided the user has taken advantage of an active wireless contract and subscriber agreement.

Unfortunately the Galaxy Tablet 10.1 only comes bundled with the device, a charging cable and Samsung earbuds, so consumers will have to purchase the additional accessories and peripherals separate. Fortunately, a plethora of accessories are available for the Samsung Galaxy Tab 10.1 further improving it’s usability and functions, including but not limited to, various media and entertainment docks, travel and vehicle power adapters, an external keyboard dock and many more. 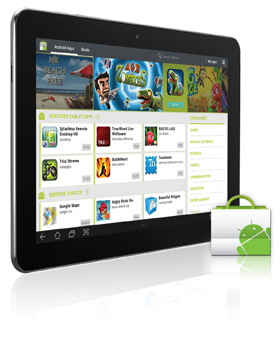 Samsung highly advocates and supports the use of cloud storage to compliment the Galaxy Tab 10.1 Android tablet. Using such features would allow users complete access to all personal files, content and media from any location with accessible internet connectivity.

With cloud storage there’s no need to store music, videos or files directly on the device. Through an external connection users can directly access all personal content wirelessly, which ultimately frees up storage space on the device and allows for improved performance.

Since the release of the latest Galaxy Tab models (10.1, 10.v) both the price and availability of the original Galaxy Tab 7″ have dropped. The new prices of the Galaxy Tab 7″ are $199 with a signed contract and 2 year service plan agreement, or $299 off contract. 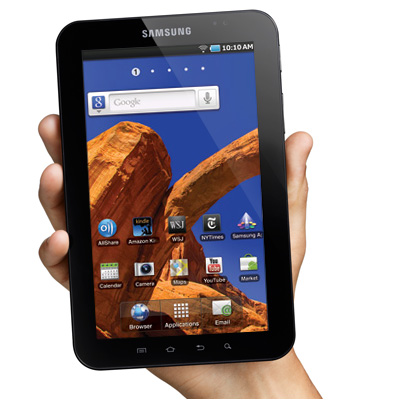 The Galaxy Tab 7″ is of course smaller than the 10.1 being equipped with a 7″ WSVGA TFT LCD touchscreen display. The external body and housing is also quite a bit thicker than the newer model, with a depth rating close to a half an inch in thickness (0.47″). The front bezel is outlined with a glossy black finish, while the back of the tablet includes a flat white matte finish. Relatively speaking, the Samsung Galaxy Tab 7″ is roughly the size of the average eBook device or low-end Android tablet; if you’ve never had your hands on either type of device then you’ll just have to take our word for it.

The official Samsung website is currently stocking wi-fi only versions of the Galaxy Tab 7″.

The original Galaxy Tab is still an excellent device for consumers looking for a cheaper tablet. The Galaxy Tab 7″ includes the Android 2.2 (Froyo) operating system backed by a 1GHz A8 Cortex Processor and 16GB of internal storage space with microSD card support to offer external storage options (up to 32GB). 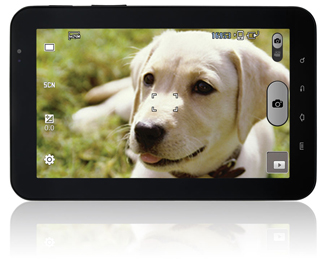 Cloud storage and cloud connectivity is also available for the Galaxy Tab 7″ as most features are activated through an Android application or software purchase; as the tablet has full access to the Google Android market users can take advantage of cloud storage through the use of various third party applications and software. 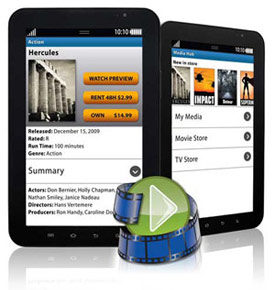 The Samsung Galaxy Tab 7″ was praised highly by reviewers but was also simultaneously criticized for its lack of iPad similar features and accessibility (not as user friendly). These days everyone wants an Apple product, so a lot of consumers are disappointed when they purchase a device that isn’t Apple-like.

For those few consumers who knew what to expect (a fully functioning Android tablet, and not an iOS device), they were relatively satisfied with the tablet. Keep in mind, we are only discussing this point so that consumers realize they will be purchasing a different device than the iPad or iPad 2 if they choose the Galaxy Tab 7″.

Nevertheless, no matter which Samsung Galaxy tablet consumers decide to purchase, they can rest assured that they will certainly be provided with a worthy device. The cheapest place we found to purchase the Samsung Galaxy Tablet 10.1 is Amazon: Click Here

to order it now. You may also be interested in the 7-inch version

, which is now cheaper.