A new year begins; bringing with it a new batch of rumors about the yet-to-be released Galaxy S IV. Considering the tremendous success that the S III enjoyed in the market, expectations on the S IV are at an all time high. The latest in these series of rumors is that Samsung’s latest flagship mobile will be brought out with a hardcore processor. The Exynos5 Octa which clocks almost 1.8 GHz. For those of you who are not very sure-footed about device hardware’s, it means that the processor has eight cores.

Hold it! Before you open another tab to investigate, let me tell you that nothing is official yet. The S III was also purported to have been made with the Exynos processor, but they switched to the Snapdragon processor. The Galaxy note II, meanwhile, was released with an Exynos processor. So predicting a scenario is virtually impossible. But whatever way Samsung launches the final product, Galaxy S IV aspires to be a delight to the users.

Several reliable sources report from the CES, that a Galaxy road map has been spotted. The Galaxy road map professed a 5 inch device with a 440p resolution display that was being prepared for an early 2013 launch. Corroborating this story is a Samsung official who believes that the S IV will see light in Q1 of 2013. February might bring about the launch of the S IV at MWC and a possible global launch by March.

Several leaks and rumors also suggest that the S IV is packing a 2GB RAM. In a matter of greater delight for the fans, the S IV is going to be a sizeable upgrade to the S III. Apparently there will be a 13MP camera with 1080p video recording capabilities, and a 2MP front camera with a 720p res capture capacity for your video chatting needs. There are also several unconfirmed reports saying that Galaxy S IV will be supporting wireless QI charging technology. 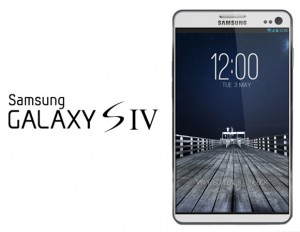 Hopefully hardcore Galaxy S III fans are not very fond of the home button. The presence of a physical home button is turning into a hindrance of late. Allegedly leaked press pictures of the yet-to-be released Galaxy S IV do not seem to incorporate any home button per se. Whether this will be similar to Blackberry’s supposed gestured based operation remains to be seen. This seems extremely interesting, whichever happens to be the eventual result.

On a related note we are also waiting to see the Android Jelly bean 4.2 live in use. Fans are undoubtedly extremely eager to hold the S IV. Apple is also on the tenterhooks as their latest Apple 5 attracted a lot of flak from users all around the world. Also the S III dug into some major market share previously monopolized by Apple. The folks at Cupertino are surely very edgy over these latest rumors. Obviously they may have their own strategies planned. Whichever the case, the launch of S IV will be a decider in terms of the Samsung Vs Apple battle.