The world of Apps is being re-invented every day. With sellers, developers and app platforms trying to outdo one another, users are pretty much bombarded with apps every minute. One of these apps that have captured customer imagination is the Snoopify app available on the Apple app store. This has been produced by Snoop Lion and is one of his many changes in business lately.

This app allows you to add Snoop Dogg stickers on your own photographs and build your very own collection. The app is currently very popular among a generation of mobile phone users who practically grew up on Snoop Lion music. It is rumored to be one of the biggest photobombing apps to ever appear on the Apple app store.

How the Snoopify app works

It is a simple app that uses photographs. All you have to do is pick a photograph and paste Snoop Stickers on it. You can use both new and old photographs and paste as many Snoop stickers as you want on each one of them. The first sticker page is free but every successive page comes at a price. What the app does is allow users to connect to Brand Snoop.

In this cleverly designed app, Brand Snoop is able to appear on a wide platform and carry a unique Snoop filter. The photos thus overlaid with stickers can be shared on social media platforms. The app is rapidly becoming more and more popular in the virtual world and selling out fast.

The app offers paid stickers to users. When you are done with page one, you can use your credit card to buy pages two, three and four. In app purchases have gone up since the launch of the app since everyone wants to bask in the Brand Snoop glory.

There have been similar apps like Path and Line which also offers both paid and free sticker overlays to customers. The app opens up a new world of photo-manipulation through photobombing apps on the mobile phone. 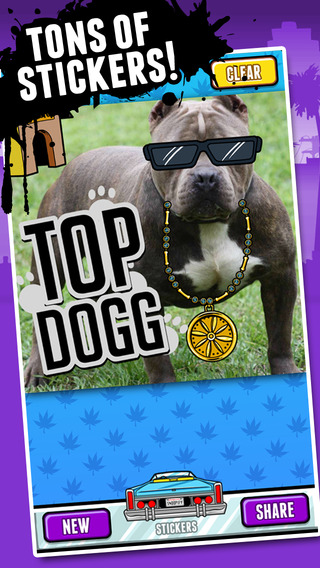 The app works on multiple business levels. First, it leverages one of the most popular mobile communication tools – photographs. Second, it enjoys an ever multiplying visibility as users exchange photos and share them on the social media. Third, the app revenue model is automatic and natural. In app purchases is a very popular consumer behavior and Snoop Lion is maximizing it.

Overall, the business strategy to break into the mobile app revolution is paying off nicely for the singer and the TV show producer. Plus the facelift a celebrity gives to any brand and product is not something that can be stressed enough.

The daftness of the app is not just the connection between the star and his fans. The app is a carefully maneuvered product that launches a new career of the legendary singer. It has been featured in the Top 25 trending apps of all times on App Annie and bagged the 36th position on App Data. Even if it slips and falls a few places over the days, it remains a happy foray for Snoop Lion into the world of mobile apps.