Here at the Tech Labs it should be obvious by now that we’re huge advocates of the gaming scene. We love indie games, blockbuster titles, and classic games (whatever that may include now). Sometimes we cover console gaming news, PC gaming news, mobile gaming news, or whatever suits our fancy.

We’re also humongous advocates for Valve’s hugely popular Steam, a digital distribution platform for PC games. The Steam platform has seen a tremendous growth in features recently, thanks to the release of a new mobile app. Eventually, Valve will provide an app marketplace, via the mobile Steam app, alongside a growing list of mobile games, indie titles and PC games. The point here is that, Steam is quickly turning into the number one digital distribution platform for everything, not just games.

Regardless, it is the gaming news that excites us the most, and the recent news and Beta update for Steam have not let us down. The Steam community has now been introduced to the Steam Big Picture beta. 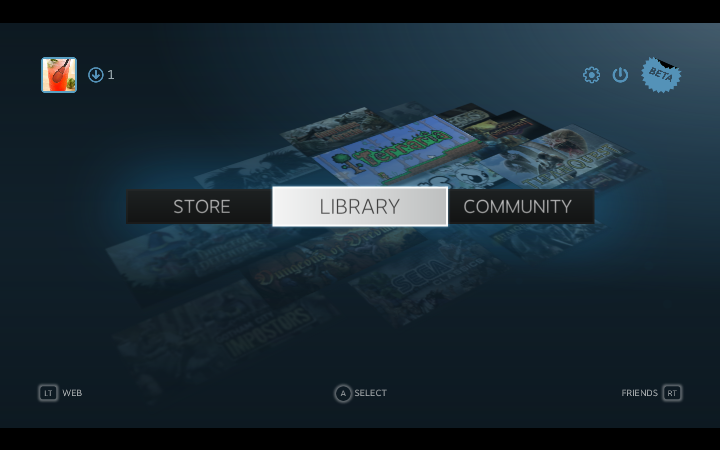 If you happen to have a decent head on your shoulders, you can probably figure out what “Big Picture” means. Just in case you don’t have that level head, we’ll spell it out for you: Big Picture means that Steam will contain a new user interface, which is designed specifically for use with TVs and bigger screens.

Don’t worry loyal PC fans, the regular Steam interface remains and you don’t have to use Big Picture mode if you don’t want to.

Steam’s Big Picture mode is more than just a new UI though, it is a complete system developed for use while sitting on the couch. Big Picture includes gamepad support, to allow you to  make use of the platform’s biggest features all while using a controller.

For example, you can now browse through your game library and interact with leading Steam features while using a connected gamepad. Sure, you could do most of this before on a TV, albeit with a mouse and keyboard, but the interface is now much prettier and easier to navigate with a controller. 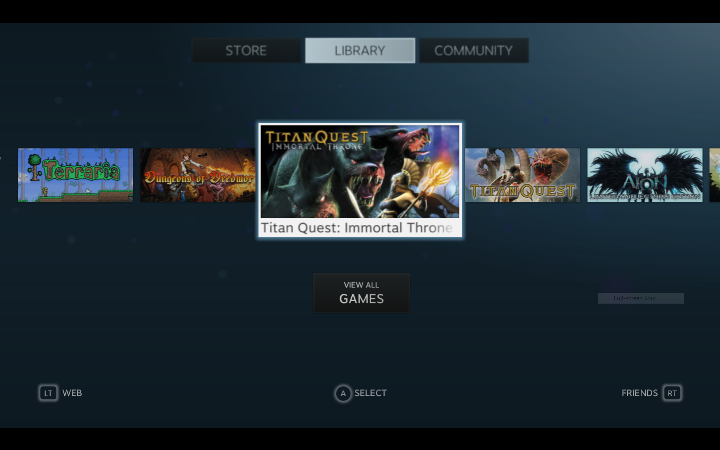 You can also browse the Steam game catalog and shop, as well as the Steam community (no surprise there). What is an attractive feature though, is the improved internet browser support that is now compatible with- you guessed it- a controller or gamepad. 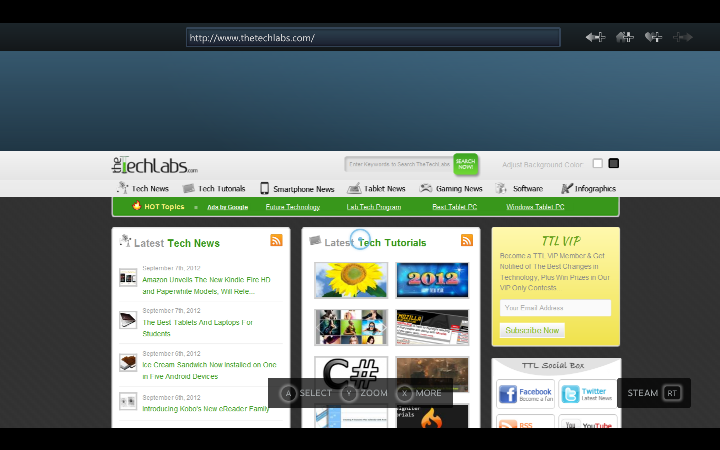 You can browse the internet, in a full featured web browser, while using just a controller. Valve calls it the first ever “first person web browser.” Instead of controlling a cursor with a mouse, you navigate web pages with a crosshair while using analog sticks. When there is a link or part of the page you’d like to interact with, it is as easy as pulling the trigger button (on the controller obviously). 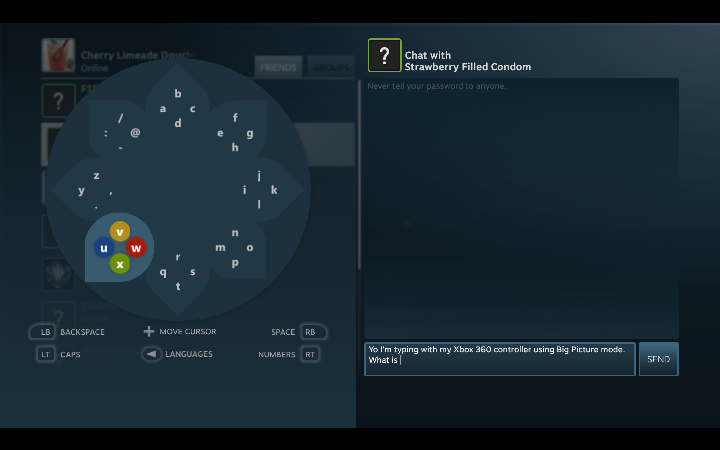 Valve has also implemented a Daisywheel text entry system that makes typing with a controller remarkably doable. The Daisywheel works so much better than just scrolling across a virtual keyboard and tapping at the proper buttons. Of course, you could always just use a keyboard if you so desired, but where’s the fun in that?

The New Big Picture Mode is Part of a Beta 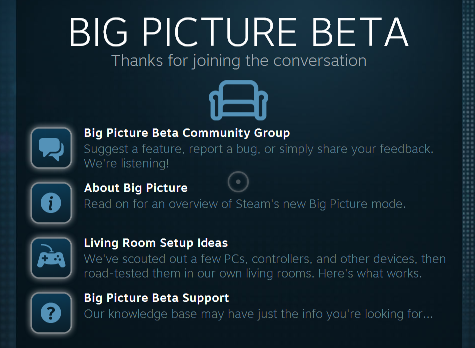 That means that the feature is still being developed, and bugs are still being ironed out. It won’t be released on a larger scale until Valve has worked out the kinks. As it stands, Big Picture mode performs incredibly well, and the interface is clearly responsive.

In Windows 7, periodically a window will pop up requiring the use of a mouse to hide it again, such as a Windows security popup or UAC prompt. Some games also load into their own launcher window which can generally only be navigated by using the mouse. MMOs, and games using online DRM for authorization, are the most common to pop up a launcher, thus breaking the intrinsic flow of the gamepad controls. Really, these issues are just small hiccups in an otherwise extremely successful Beta launch.

It just means that every so often, you may still need a mouse to navigate.

How Can I Try Out the Steam Big Picture Mode?

To try out the new Steam Big Picture mode for yourself, the steps are relatively painless. You have to opt in to Steam beta updates, which authorizes Steam to download beta software versions, and then restart Steam. 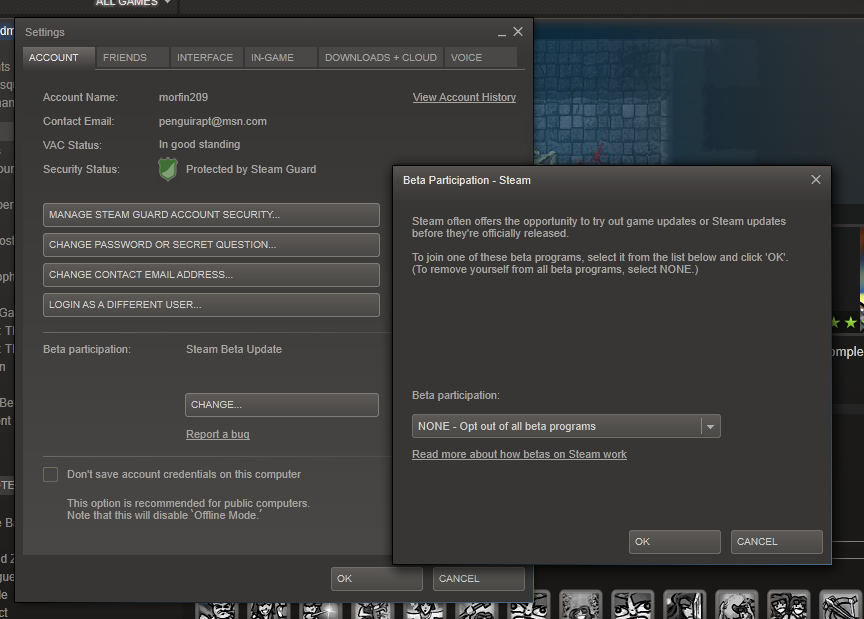 To do this, first select “settings” from the Steam menu. In the window that pops up, select “change” under the “Beta Participation” box. In the new window, make sure to select “Steam Beta Update” in the dropdown menu, then select OK. Once you’ve opted into the open Beta update just restart Steam, and it will download the necessary files the next time you launch it.

Once Steam has been restarted, you can select “Big Picture” in the top right of the window. Congratulations, you’re now experiencing Steam’s new Big Picture mode!

Keep in mind this is part of a Beta update, which means that there will be software issues and bugs. Be sure to report any problems you encounter with a support ticket, this will help Valve fix any significant problems before a widescale launch (that is usually why you participate in a Beta anyways, to help make the finished product better).

Remember to connect a gamepad or controller too, so you can experience the full effect of Big Picture mode!