In the month of October, Gmail’s new compose feature was rolled out. It gave users an option of a more efficient and cleaner format. These changes were happily accepted by some users while others faced difficulties.

You can order your e-mail in whichever way you want, as Gmail has not made this latest feature mandatory.

Some reasons why you should switch to this new composition of Gmail:

1) Several Drafts at the Same Time

To have multiple drafts is extremely convenient if you try to copy text/data from one e-mail to another, or organize various discussions. Multiple drafts can now be opened on the Gmail screen, or you can even decide to pop them for easy re-sizing.

This Gmail feature has made it easier to place jobs on back burner. Unlike the way GTalk conversations function, with this new feature, users can minimize the draft to the bottom. Making it harder for you to forget about the e-mails which were unfinished till your session ends, Gmail can now make them sit on the screen. It also keeps your day planned.

3) Background actions can be Continued without Interruption

While composing an email, sometimes we need to visit other mails to look for something. For this reason, the compose option now will now not interrupt the draft which is being worked on.

4) The Interface is now more Focused

A much better streamlined e-mail interface is featured by the compose mode. Many of the options are now placed after the send option on the bottom which is accessible on priority basis. As a result, you get a cleaner and better interface.

After clicking on the same arrow in the right corner of e-mails and selecting “switch back to old compose”, you can easily go back to the older interface.

It will now take you a bit longer to use the required tools. Changing the font has also become difficult now as the option seems buried. This format is used to hide the whistles and bells.

2) BCC and CC Tucked Away

It is now much difficult to access the BCC and CC fields as they are placed in far left corner. Also the option of editing your e-mail’s subject is unexpectedly buried under the forward and reply options. 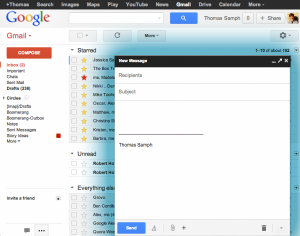 In the old compose feature, opening a new mail brings the large canvas which we’re used to.

The bottom of the Gmail window is not cleaned up by the compose option which may even result in closing of chat or e-mail windows if many windows are opened at the same time.