The iPhone and iPod Touch have always gone hand in hand, but one area which Apple (till now) didn’t consider worth giving much thoughts to was iPod’s camera, which changed with the launch of its 5th generation. I know it’s ‘just’ 5MP which is quite less as compared to the 4S or 5’s 8MP, but that doesn’t mean we could write it off, because it is one of the many hallmarked features of the new iPod.

Apple knows this, that’s why you get the loop with the iPod, which distinctively reminds you of the point & shoot cameras or ‘The Camera’ as we all know it, in the market. Apple has seen iPod’s growing market as a hand held device. An iPod is cheaper than iPhone, and still boasts of the Apple logo and does everything that the iPhone could, except of course making a call. But making a call isn’t anymore the main function of a smartphone anyway. 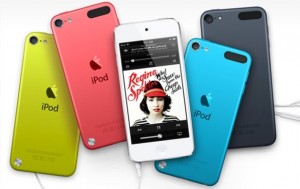 This device is in a sweet spot, it can be bought just to play the games or to function as a media centered device, or for the sake of accessing apps, and now with an added advantage of taking day-to-day photographs. It can easily replace the point and shoot camera’s market, even though the camera is not as good as the competition, but still it is portable, multi-tasking, and delivers what this market mainly requires: ‘photos you can share with your friends’, as the photography enthusiasts usually go with DSLR and others can get used to it. Superior software and small tweaks made in camera’s internals make it a better camera than its father, the iPhone 4’s camera. 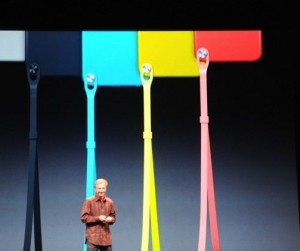 Another colorful change from the black-white boxes is the addition of colors, namely, silver, blue, slate, yellow, pink and red, and of course with matching strap. The front is white though, except for Slate, which has a black front. It has gone thinner and lighter, and is in fact even thinner and lighter than the iPhone 5 itself. It weighs only 88 grams, and it is so thin that its camera seems to be popping out. The price variants of $299 (32 GB) and $399 (64 GB) is not totally unfair if seen with the upgrade it has received but it would still be in everyone’s benefits to release the $199 version. And now I would love to get your eyes towards another unmatched feature of the new iPod, its new 4in Retina Display, an upgrade in terms of the screen size, which is bigger.

When Steve Jobs launched the first Apple set, back in 2007, he showcased three devices with their trademarks, a wide screened iPod, a revolutionary phone, and a futuristic internet communication device. Well this iPod is a combination those visions, obviously with the exception of Phone features – it is an iPod with touch screen, a futuristic internet communicator, a great camera, a powerful game device and in sync with iCloud and with access to the iTunes.