Remember those cute Furby toys, from 1998 that had a propensity for being very annoying? Well they’re back, again, and this time they’ve had a significant upgrade.

It’s been 14 years since the first Furby hit the market in 1998. Hasbro stopped manufacturing the original Furby in 2000, and released a new version of the little menace in 2005. The 2005 version of the toys were called Emtro-Tronic Furbies and were larger in size and had more noticeable facial expressions and more accurate voice recognition. Unfortunately, the 2005 reboot was not as successful as the first version of the Furby toy and died out pretty quickly.

Furby is back again and will be available sometime in the fall. This time around though, Furby has some significant improvements that should help this particular version of the toy to become a success.

Improvements to The Furby Toy

The Furby toy received updates to its appearance, has revamped internal hardware and is now compatible with Apple’s iPad. The Furby toys actually have a new accompanying iOS app that will allow you to interact with the toy by feeding it and playing games via an iPad. The iOS app will also translate Furbish, which is Furby’s native language, into English and back again. 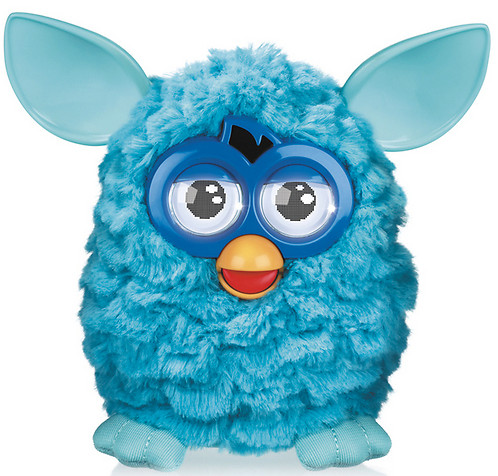 If anyone remembers the definitive version of the Furby toy, most of its novelty relied on its unique communication methods. Furby would speak in a set of jumbled words and you were tasked with learning its native language while teaching it English in the process. The same holds true with the new version of Furby, but it will be much easier thanks to the companion iOS app.

The more you talk to furby, the more words it will pick up and the more it will talk back.

Furby Gets Some More Expressive Oculars
Furby now has a different set of oculars, which aren’t quite as blank and creepy this time around. In place of the circular plastic eyes of the classic Furby, are a couple of LCDs that display images in a dot matrix pattern. The new LCDs help Furby show a wider range of emotions, and animations, that essentially allow it to interact with you more.

Graphical patterns and pictograms will also show up on the LCDs during different situations, which include things like rainbows, and two-finger peace signs.

One Furby will interact all by its lonesome, but if there are several Furbies they will all interact with each other, as well.

The new Furbies have multiple personalities that can appear at any given time. The presence chosen depends on what the Furby is doing at the time of the change and how you have been interacting with it. For instance, if you are being mean to the Furby, or refusing to feed a hungry Furby, it will eventually become enraged. 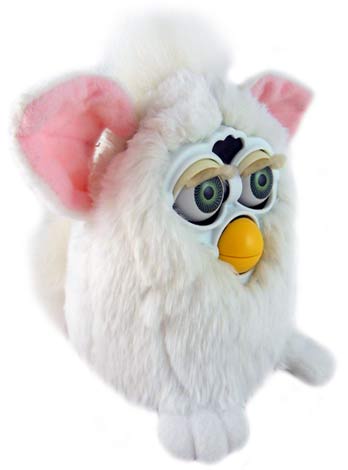 Furby also loves to dance along to music and will sometimes begin humming, which can at times seem sinister in a moment of silence. Try watching the Furby dance and hum randomly, it gets quite unsettling especially if you find the toy creepy to begin with.

Okay, so maybe not everyone finds the toy to be disturbing or irritating. A few of you out there may even find the toy cute. You’ll be happy to know that, for the most part, the aesthetics of the first Furby are maintained here.

The new Furby still has the same furry exterior and will be available in varying colors at launch.

Just below the eyes, similar to the beak of a bird, is a mouth that includes a buttonlike tongue. We’re describing it as buttonlike because if you press a finger on it, the Furby will simulate being fed.

In addition to the beak, the new Furby also has capacitive sensors in its head, stomach, back and sides that allow it to respond to touch. The sensors allow you to do things like tickle and poke Furby’s body while receiving the appropriate response from the toy.

Furby also includes an integrated microphone and a mechanical tilt switch that works similar to an accelerometer. While you can’t just play tilt games with Furby, the toy does know when you’re holding it upside down.

Furby takes two AAA batteries, and once they’re in, the toy does not shut off. Once activated, the Furby will demand attention, and can begin chattering away at any time. However, Hasbro does guarantee that if you decide to remove the batteries from Furby in a moment of sheer peril, the toy will not lose its stored memory and personality traits like the classic version did.

As you can see, Furby’s got quite a few more upgrades this time around, which will ultimately make the toy more interactive, or creepier, depending on how you feel about the little runt.

Furby will be available sometime this fall, for $60, in six different colors, which will eventually be increased to ten total. Hasbro recommends Furby for children ages 6 and up, because obviously the toy does include moving parts and should still be handled with care.

Expect the newest version of the Furby to be something of a rarity this holiday season, we’re guessing there’s going to be more than just a few folks out there who will want one.