With CES bringing us the launch of some of the year’s top upcoming smartphones, it’s clear that 2013 will be a year of innovation and surprises, with some weird and wonderful design features making their way into handset development. The new generation of devices will also mean you can get your hands on some great mobile phone deals as developers choose new flagship builds to promote. Here we take a look at some of the most innovative and anticipated smartphones headed onto the market this year.

Apple potentially has two devices to launch this year. Reports suggest the new premium device – it’s not known whether it will be an iPhone 5S or an iPhone 6 – will feature a crisper screen and wireless charging. We’re also awaiting confirmation on the rumoured “budget” iPhone, apparently in production for launch in late 2013.

The Galaxy Note series is known for offering large, beautifully clear handsets, and the Note III is no different. Most are expecting a 6-inch or larger screen, as well as a flexible screen, but it’s the new eight-core processor that Samsung have just announced that has commenters speculating on the Note III’s specs.

The Blackberry 10 has been hotly anticipated in the press for all the wrong reasons lately, as the development team in charge underwent significant financial pressures last year and it’s hoped that this can get them back on track. New touchscreen software, a 4.2-inch display and a 1.5GHx processor makes this a great device, especially for existing Blackberry fans. 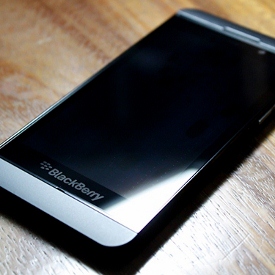 The Grand S is a beautiful achievement by Chinese tech giant ZTE, picking up awards for its design already and packing some truly impressive features, including a full HD 5-inch display. The touchscreen itself is the thinnest in the world, measuring in at just 0.55mm, making it a must-have for the style-conscious gadget-lover.

The YotaPhone is easily the most innovative on this list, boasting a never-before-seen feature that could change the way we use phones. As well as a 720p 4.3-inch display on the front, the phone also has a 4.3-inch E-Ink display, for preserving power while reading. Alongside a great range of standard features, this looks to be the game-changer of the year.