In case you’ve been out of the loop, Valve developed Portal. Portal is a video game, that uses platformer and puzzle elements to tell the story of a test subject named Chell, who is trapped at a science facility named Aperture. Aperture was designed with the specific purpose of running continuous science based experiments and tests. Chell awakens to a facility that’s long been deserted by employees and is now run by Glados, a computer based artificial intelligence system.

Long story short, Chell gets a hold of a portal gun that allows her to teleport between locations using connected portals. As the player, you must solve various puzzles and navigate your way through Aperture using the portal gun to help Chell escape.

In Portal, various AI based characters appear throughout the game. One of the most notorious characters is the Portal turret gun. Every turret gun is outfitted with a distinctive AI personality that creepily identifies a target and blasts away, after which they show remorse and apologize for their transgressions. Yes, the turrets actually apologize for killing you, but not before they greet you with an eerie, “hello”.

Thanks to WETA Workshop, Valve now has a Portal turret guarding their home office.

The Portal Turret Comes to Life

Originally, Valve released this teaser video with the vague name of “Hello friend.” They didn’t provide any additional details about the mysterious Portal turret in the video or where it came from.

More recently, however, they also released this video, of Valve employees unboxing and setting up, the Portal turret replica. The end of the video clearly states “thank you Weta Workshop,” before closing. Now we actually know where the beautiful, and panic inducing, replica was created.

As you can see in the video, the Portal turret replica works just as it does in the video game. It features an AI based personality, with object tracking support. The turret will correctly identify when a target is standing in front of it, and will begin following the mark with its eerily accurate tracking system. Then it will [fake] open fire and take out its suspected victim.

It was scary enough seeing these things attack in the video game, and now there is a true Portal turret out there, waiting to hunt you down.

There is a Team Fortress Sentry at Valve Too

This isn’t the first time that WETA Workshop has created a replica for Valve. In the past, they also designed a fully working Team Fortress Engineer Sentry too.

As you can see from the video, the level 1 Sentry Gun now guards Valve’s lobby in Bellevue, Washington. Anyone with enough to guts to venture inside Valve’s headquarters will now have to face an Engineer Sentry and a Portal turret.

If you don’t genuinely think both of these replicas are cool, even if you aren’t a fan of the video games, then there is something inherently wrong with you. Sure, both replicas are virtually useless, but there’s no denying that they are a damn extraordinary way to show off Valve’s brand.

You can’t just order one of these turrets directly from WETA workshop, and we’re willing to bet you’d need quite a large wad of money of you did, but you can still buy some pretty nifty stuff. 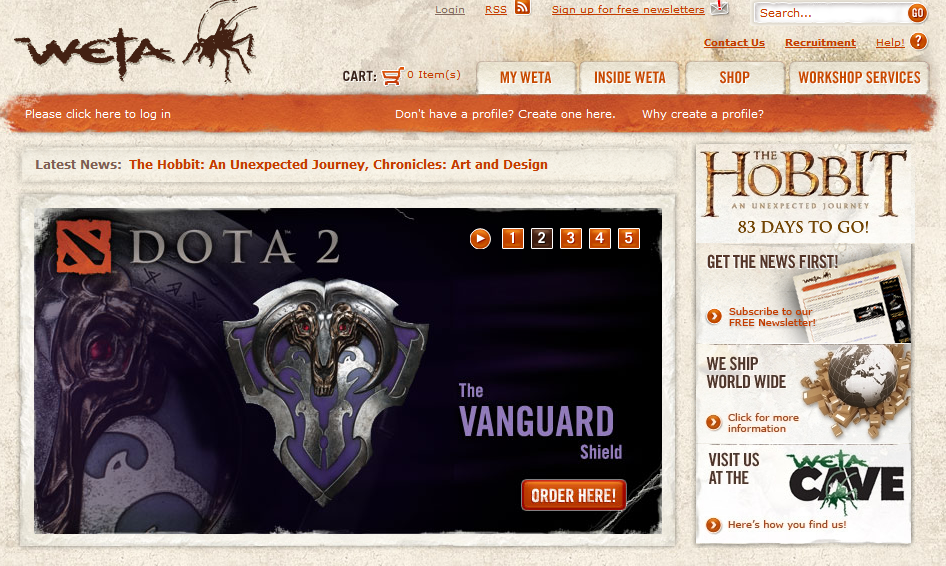 WETA Workshop is like the ubergeek version of a memorabilia shop. You can get custom replicas of weapons, armor, props, creatures, models and miniatures.

WETA Workshop actually creates materials for use in films, and even has a digital design studio that has worked with Peter Jackson, Andrew Adamson, James Cameron, and Steven Spielberg. Needless to say, these guys and gals, are no joke.

If you want something recreated from your favorite game, movie or book then WETA Workshop is the place to go. The prices probably are excessive, but who cares, the stuff looks authentic.

We’ve already started saving for our life size replica of the Tech Labs logo. We don’t quite know where we’re going to put it, but it will certainly look unbelievable that’s for damn sure.