Microsoft is known for many things where Windows is concerned. They are known for being the best, the most popular, and the golden standard. One adjective from their repertoire, however, is less well known; Microsoft is safe. I don’t mean that Windows has a five star crash test rating, it doesn’t keep you from sunburn either, and neither does it keep you from having a baby (of course if you’re spending too much time playing Diablo 3 right now, you’re probably not having to worry about any of that). No, Windows plays it safe. Every time a new Windows OS is released, it looks and feels like Windows. There may be a new coat of paint, a few tweaks here and there, but it is still Windows.

However, Microsoft has taken it upon themselves to make one of, if not the riskiest moves they have ever made. It seems they believe that the classic Windows formula is growing old; that it needs to be refreshed completely by being changed as much as possible. I understand a company wanting to go in a new direction, but why they chose this one I’ll never know.

If you’ve seen Windows 8 or even a Windows phone recently, you know how this is supposed to work. Something called Metro shows you a live preview of apps, constantly updating you on your friend’s unimportant status updates, and making sure you don’t have to tap the screen much to do anything. Now, that’s a great idea and all, as long as you’re using it on phones and tablets (an idea Microsoft has already tried with little success). 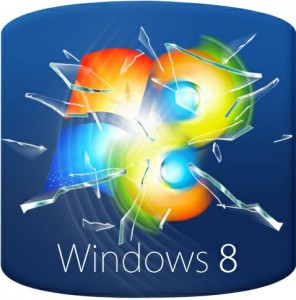 The problem with this is that Windows 8 is designed for use with touch screens, which is great if you actually use a touchscreens. However, I, like most of the PC using world, do not want to do everything on a giant touchscreen. When finishing a PowerPoint presentation at three in the morning, I don’t quite feel like dragging my fingers all over a 15″ screen to do tasks that would normally only require the slight flick of a mouse.

Windows 8 is currently plagued with all types of other problems too. A hideous side menu that serves no real purpose, no start menu, an unnecessarily giant clock, no start menu, and no start menu. See the problem here? One of the most useful and traditional PC oriented Windows staples has been thrown out of the window (see the irony in that?) in favor of a mobile oriented OS.

For some reason Microsoft has decided to risk its most profitable piece of business so they can jump into the piranha tank known as the mobile market. It’s completely understandable that Microsoft wants to take the classic OS in a new direction; I simply don’t agree with the direction its being taken. Hopefully, Windows 8 will not be released quite like it is now, but it’s unlikely for much to change at this point. At least there should be a huge amount of third party support to help restore some beloved and traditional features of the world’s biggest operating system.