The word super hero automatically invokes images of muscled men with their secret identities and super powers, fighting to save the good from the bad.  For many people, the super powers are a gift of God, but some people believe in getting what they want. So, here’s a list of some incredible inventions that can easily replace the super powers and make you a superhero.

The Power of Being Invisible
One of the ancient super-powers, the invisibility cloak used to feature in stories about magicians and wizards.   You can be a wizard too, with the “mantle-cloaking” technology developed by researchers at the University of Texas, Austin. This cloak was developed using an ultra-thin “meta-screen” which cancels the waves of light when it hits an object.  Unlike other similar invisibility technologies, this technology suppresses the object as well as the shadow of the object, making the object hidden from all sides.  Although, the current technology is not perfect, it’s developers certainly hope that one day it would be useful for the defense and healthcare industries.

The Lasers
With passing time, lasers have somehow got the reputation of being a lesser important technology that is only fit for kids play. However, the laser technology still promises to be a great weapon of the future. Both the Navy and the Air Force are experimenting with newer laser inventions to be integrated with their vessels and weapons.

Get Hold Over People’s Mind
Want to know what’s going on in your boss’s mind? Though such technology is still to be developed, the latest “transcranial pulsed ultrasound” technology helps you to do something with your own mind. By targeting high-frequency sound waves at certain sections of the mind, this technology can be of tremendous use to mankind. To be installed in the helmets of the soldiers, by the military, this technology can help in numbing down the pain, increasing their alertness or maybe just help them get over their nervousness 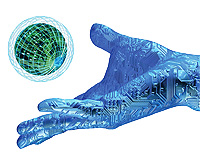 Get the Strength of a Super Hero
If you are more for the self-made men prophecy and are a fan of the Batman, the XOS 2 exoskeleton is just the thing for you. The latest version can lift about hundreds of pounds of weight and the wearer does not even get to know its weight. There is just one small glitch. It is still in its designing phase and needs constant power source.

Fly High
Ever dreamed of flying like a free bird? Yes, this one is a super power amongst all super powers.  You have few options to choose from, like the jetpack. Just one caution though, you need to fly about 30 feet above a water supply because it is powered by water. Another latest flying technology is a flying bike design developed by Czech-based companies Duratec and Evektor.

A few similar technologies include the “bionic eyes” for enhanced eyesight and “Ascending Aggies” for wall crawling. Turn your super-hero dreams into reality with these amazing technologies!