After months of rumors and speculation, Google has revealed their latest products in the Nexus product line. In addition to announcing the new Google Nexus 4, and a 16GB version of the Nexus 7 tablet, they’ve also announced the much larger Google Nexus 10. It’s been a while since the Nexus phone has had a refresh, and it has certainly been long overdue.

The original Google Nexus phone, which will soon be obsolete, had less than optimal hardware, yet Google continued to make it timely by improving performance in new versions of the Android OS. Mainly, what has helped the Google Nexus remain relevant in a growing mobile market, is the fact that the device has been untouched by carrier specific bloatware.

The beauty of the new product line refresh is that, aside from the new Nexus 10, both the Nexus 4 and the new model of the Nexus 7, will be available for the same price as before. So essentially, the hardware has gotten an upgrade but the price has remained the same.

In a world where prices are always continuously rising, that is quite astounding. Way to go Google. 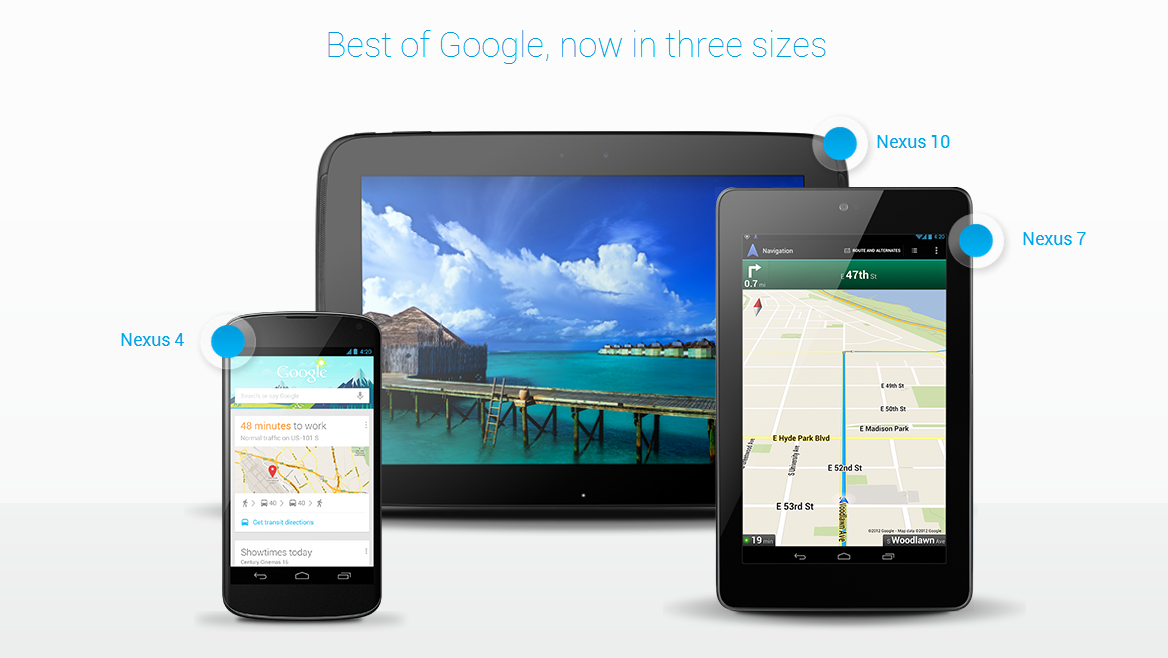 Google has taken a break from Samsung this time around, deciding instead to provide LG the opportunity to shine. Previous Nexus models were manufactured by Samsung, obviously that has since changed. 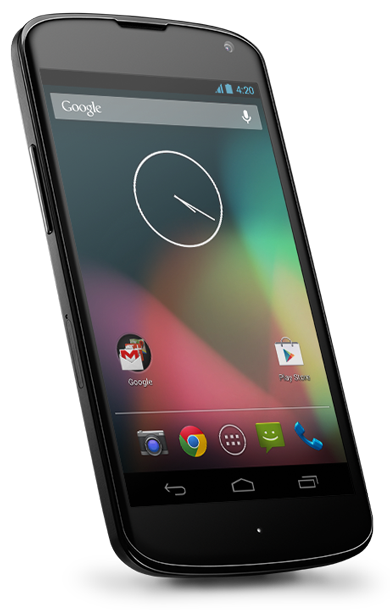 The Google Nexus 4 sports a 1.5GHz quad-core Snapdragon S4 Pro processor, and a whopping 2GB of installed RAM. In case you didn’t already know, packing 2GB of RAM in a mobile device is ridiculous, but the beneficial kind of ridiculous.

The Nexus 4 will also include 8GB of internal storage, with no microSD slots for expansion. So, once again, Nexus owners will have to make due with the internal storage capacity.

Some folks will be discouraged to know that there is no 4G LTE support, but it’s likely Google chose to omit 4G support so that the device would be universally compatible with most networks. Like previous versions, the Nexus 4 will be unlocked, out of the box, which means it supports HSM, UMTS and HSPA+ networks. If you want a more in depth look at what mobile networks the Nexus 4 is compatible with (nearly all of them), then be sure to check out the full tech specs list below.

Arguably one of the most striking features of any smartphone is the display. The Nexus 4 is certainly not lacking in that department, weighing in at 4.7 inches, the display is a WXGA IPS panel with support for a maximum 1280 x 768 pixels at a strong 320 ppi. In addition, the screen is protected by Corning Gorilla Glass 2, which means it’s damn near scratch resistant and shatter proof. 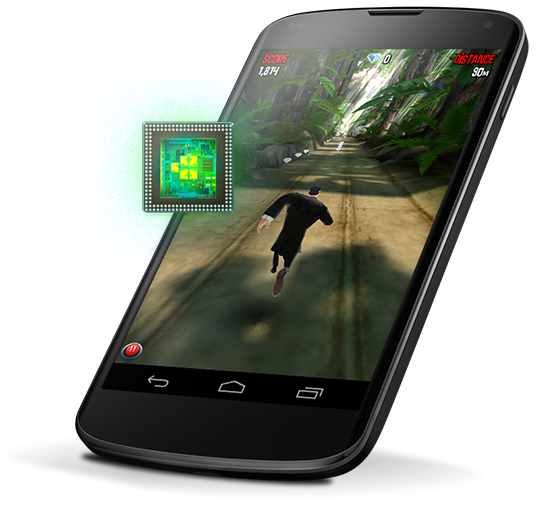 The camera is nothing surprising, it’s rated at 8 megapixels for the rear facing camera, but Google claims the developers have gone to considerable lengths to improve the device’s low light capabilities. The last Nexus camera produced some terrible shots in low light environments and settings. A 1.3 megapixel front facing camera means you’ll be able to participate during Skype video calls and Google Hangout sessions to your heart’s content.

Also, worth noting is that the Nexus 4 is equipped with an NFC (Near Field Communication) chip for compatibility with Android beam, and it also supports wireless charging. Considering that fact that we’re already talking about two features the iPhone 5 is lacking, it looks as if the Nexus 4 will be just as successful as its predecessor.

There are quite a few common features in the Nexus 4 as well, like integrated WiFi support, a 3.5mm headphone jack, a microUSB port, a SlimPort HDMI output, Accelerometer, Gyroscope and ambient light sensor. We’ve skipped over some features as well, instead we’ll turn your attention to the complete specs sheets below.

The Google Nexus 10 – Move Out of The Way iPad 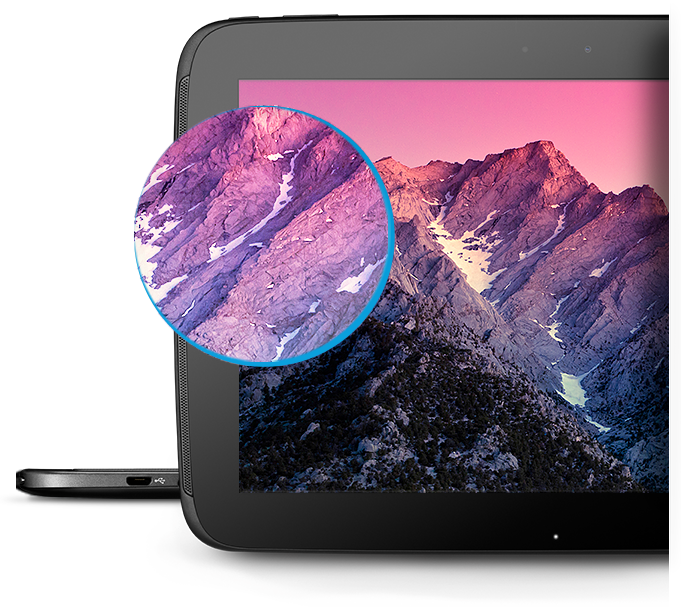 Samsung’s panel is called a True RGB Real Stripe PLS, and even though it’s certainly a mouthful, the title is spot on! The screen on the Nexus 10 is brilliantly bright and beautiful. It features some pretty astounding viewing angles too, you can look at the screen from any direction and still see the rich colors. Furthermore, with a Gorilla Glass 2 protective screen over the display, you won’t have to worry about scratches or screen shatters if you accidentally drop it.

The Nexus 10 is powered by a 1.7GHz dual core Exynos 5250 processor with a combined 2GB of installed RAM. That’s more than enough power to run the latest version of Android, Jelly Bean 4.2, smoothly. With an added Mali T604 quad-core GPU, you’ll be able to play games even with the most demanding 3D graphics.

A 5 megapixel rear-facing camera means you can shoot photos with the tablet any time, and make use of the new Photo Sphere panoramic feature in Android 4.2. A 1.9 megapixel front-facing camera is also equipped on the Nexus 10, for video calls.

Dual NFC chips means you won’t have to worry about tapping the device in a specific location. With Android beam turned on, you can simply tap another NFC enabled device anywhere on the back of the Nexus 10 to transfer files or media. 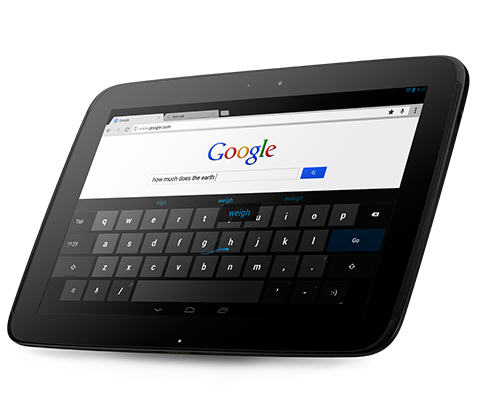 Google claims you’ll average about 9-10 hours per charge with the 9000 mAh Lithium polymer rechargeable battery. If that’s truly what the Nexus 10 gets, then that’s pretty damn respectable considering all the power this tablet has. It’s likely that real-world scenarios will cause the battery life to be slightly lower in grade.

In fact, there are two models of the Nexus 10 available; one with 16GB of internal storage and the other with 32GB. Of course, the 32GB model is more expensive at $499 for the WiFi only version, while the 16GB version is only $399 for the WiFi exclusive model. 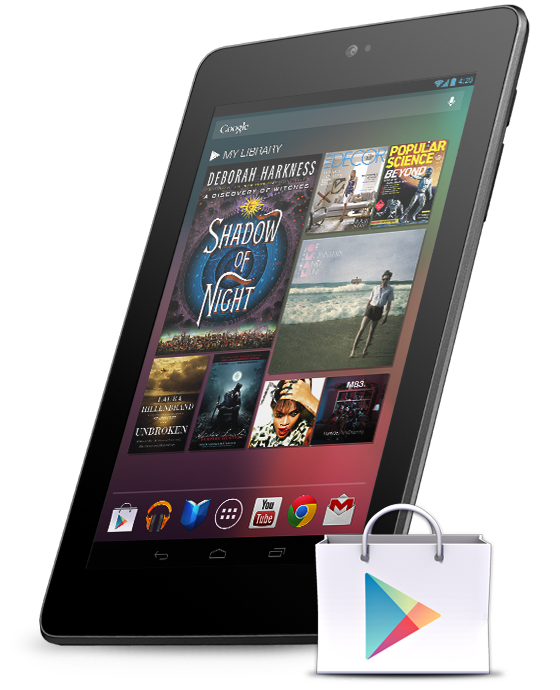 With all the love going to the new Nexus 4, and the Nexus 10 tablet, Google felt like the Nexus 7 shouldn’t be left out. It’s pretty much the same tablet as before, so if you’ve already seen our previous article then you know what you’re getting with the newer Nexus 7 model.

The biggest change is the internal storage capacity, as the Nexus 7 now has a 16GB and a 32GB model respectively. Since the features are fairly intact, or similar to the previous version, we’re not going to cover the Nexus 7 in depth.

The 16GB model of the Nexus 7, with Wi-Fi only, is $199. While, the 32 GB version of the Nexus 7, also exclusively equipped with Wi-Fi, is $249. A third version will be available (starting Nov. 13) for $299, with 32GB of internal storage that includes a cellular radio for general use anywhere.

As you can see from the specs, Google is taking on both the low-end tablet market and the high-end tablet market with their new Nexus products. More specifically, the Google Nexus 10 is going up against the big names, even the new iPad, and only time will tell if it’s a success or not.

If we had to guess, mostly due to Google’s cost and feature ratio, all of the Nexus devices will be big hits with the consumer market. After all, the Nexus 10” tablet has a better screen than the new iPad, and it is only $399? Yes please!

Factor in, that all of the devices listed above are running the latest, most stable, and most fleshed out version of Android to date, and it starts to look like Google has a few winners on their hands!

Are you excited for the new Nexus models? Are you planning on getting one? Let us know what version you want, and what you think of the new devices, in the comments below!