Social networking has seen great number of advances in recent times. With Facebook, we see users spending an increasing amount of time online. Social networks try to do everything possible to get you to spend more time on them. Google’s very own social networking platform, billed as a competitor to Facebook, Google+ was launched with much aplomb. Google+ unfortunately failed to grab as many eyeballs as expected. Search engine mogul Google has a reach all over the world. This exponentially increased the amount of expectations on Google+. Frankly, if anything, Google+ failed to live up to the undue expectations levied on them.

Delving deeper, Google+ has everything you would ever require of a social network. Photo and content sharing and other ways of interacting with your peers are just as fun with Google+. What most people are unaware about, however, is the fact that Google+ is built into the Google functionality. Take the Google+ photos for instance. Photos stored by the users on their Google+ accounts and Google Drive accounts can be found using a simple web search with the search string ‘’my photos’’. The search result offers up photos personalized for your account.

As if that wasn’t cool enough, Google took it to the extra mile by offering machine learning that enables you to enter specific target queries. ‘My Photo’s in New York’ or ‘My Photo’s of animals’ will sprout up results tailored for these particular instances. This search function is probably the best unsung feature of Google+. If you thought photos are not enough to convince you then this one’s for you. Google is rolling out another new search feature this week. Google now lets you search anything from all of its properties right from your mail box. Calendar events, documents stored in Google drive and many more items are set to make an appearance in your mail search box.

This absolutely non-intrusive and doesn’t disrupt even a single one of your core functionalities. But it undoubtedly saves time for the countless users who depend heavily on Google’s ecosystem for a majority of their communications. The new features are currently being made available only to English speaking US citizens. A complete roll out does take some time to appear. The new search functionalities were not available across all Google platforms. Google Apps accounts were sadly not updated to include this new feature. The complete roll out may take over a week’s time to get to all the users. 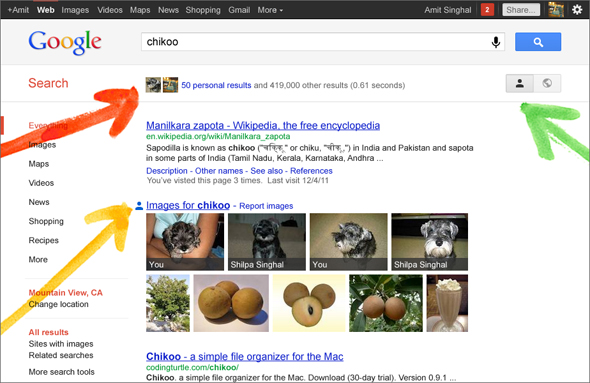 Google’s new search improvements are another way of incorporating the ‘Google Now’ feature from the mobile platform. ‘Google Now’ successfully incorporates the social integration that users need from their social networks. Google+ still has chances of seeing brighter days in future with the current crop of features. Facebook has intensified efforts to strengthen its own foray into mobile platforms. Facebook Home encountered some unforeseen setbacks. This goes to show that you can’t always be right about everything. Entering a new area requires a certain amount of patience. All the waiting and watching may yet prove to be to Google’s advantage. Google+ has a long way to go still. With the apps looking so sharp, there is yet hope for it.