No doubt while browsing the web, dealing with home networking solutions or even participating in some form of network development you’ve come across the terms IPv4 and IPv6. Terms like “IPv4 vs IPv6”, or “IPv6 tutorial”, or even the much broader “Internet Protocol”.

Unfortunately, most people have no idea what these terms mean, or what they are in fact referring to. As a general problem the terms are rarely explained well, and when they are, the explanations are not usually in simple form.

To put it quite bluntly, we’re here to answer one question; what do these terms: “IPv4 vs IPv6”, “IPv6 tutorial” and so on mean exactly?

The “I” and “P” in “IPv” stands for “Internet Protocol” which directly refers to the communication protocol, or packet transfer procedure of the internet.

Every device that connects to the internet uses a unique address called an IP address, which works very similar to a home/location address. Pieces of data, called “packets”, are transferred via the internet between machines, which in turn gives us the fully functioning interior workings of the online community. In order for two machines, or devices to communicate via the internet, they must transfer these “packets” of data back and forth. Unfortunately the data “packets” can not be transferred if the devices do not each have their own unique address. 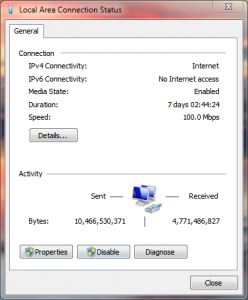 Think of it basically as a home address. You can’t send a mail correctly if you don’t list a proper return address, because basically if the mail doesn’t reach its destination it must have a way of returning back to you. Also, the mail receiver would have no possible way of responding considering they have no idea what address the should reply to.

While the internet does not necessarily return data “packets” that don’t reach their destination, like undelivered mail, proper use or protocol requires two devices to have unique addresses to even begin communications.

IPv4 is of course the older, more supported version of the internet address procedure. But ultimately, there are no longer any free IPv4 addresses, meaning all of them have been occupied or taken up. What does this mean exactly?

In a general sense, there will no longer be any alternative IPv4 addresses, directly meaning they will all be occupied and new users will not be able to venture into cyberspace. Although the realistic situation is not quite as dire.

So basically the IPv4 protocol has run out of available addresses which is why most websites or internet servers are adopting the newer IPv6 protocol. In most cases, the two versions are compatible. This contrast between the two protocol versions is exactly what’s being referred to when “IPv4 vs IPv6” is mentioned.

The Internet society has worked together with several huge ISP companies and online organizations to successfully switch the world over from use of the older IPv4 protocol to the newer IPv6. “World IPv6 Day” is scheduled to occur on June 8, 2011 and will involve several major online organizations switching services to IPv6 to test out its overall functionality and reliability.

This has no direct consequences or relations to home consumers and average internet users (meaning you), the IPv6 protocol switch only seriously pertains to large online organizations with an extensive listing of online hosted content.

You will likely see little to no change in online functionality or service.

We have created a forum thread on Internet Protocol! Please feel free to join and participate in the discussion here. Feel free to tell us your thoughts or opinions on the subject, ask questions or even seek advice on using either protocol version.